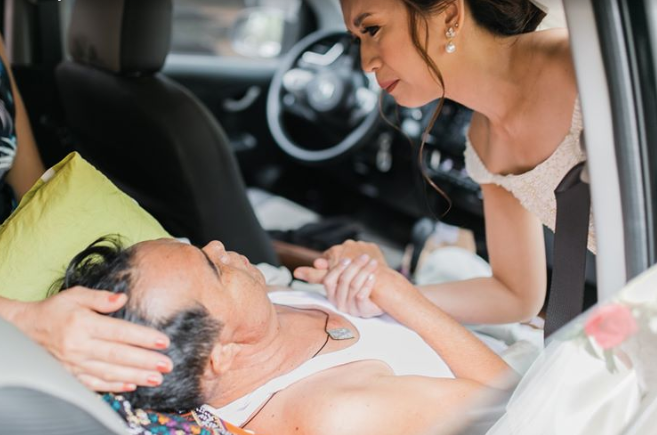 A heartwarming photo of a bride holding his sick father’s hand just before her wedding went viral on social media on Tuesday, March 26.

“One of those heart-wrenching scenes where a father who has stage 4 cancer refuses to be admitted to the hospital just so he can witness his daughter’s wedding,” stated the Facebook page of Happy Smile Studio in a post.

According to Jessie Tesoro, owner of Happy Smile Studio, the photo was captured by their photographer, Biboy Sajulga, in the wedding of Kris and Herlyn Dumaguin at Sacred Heart Chapel.

“As far as I know, the bride’s father has stage 4 brain cancer. The day before the wedding he was so excited to walk down his daughter down the aisle. Unfortunately on the same day, he collapsed,” she said.

Tesoro added that the car was parked right in front of the church entrance. Right before the bride walked down the aisle, she went to her father to kiss him and said: “Pa, magpaksal nako ha?” (Pa, I’m going to get married now, ok?)

Because of her father’s hospitalization, the supposed father-and-daughter dance at the reception did not happen. The bride’s mother danced with her daughter, in her father’s place, instead.

INQUIRER.net has reached out to the family and is awaiting their response. JB