The story behind couple at bar exam ‘salubong’ | Inquirer Lifestyle 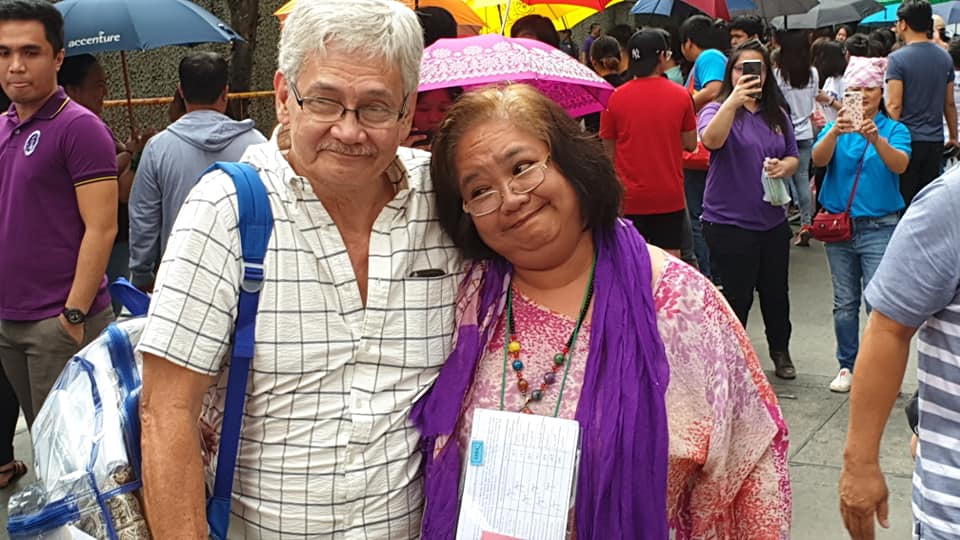 After four grueling Sundays, exhausted bar examinees exited the University of Santo Tomas (UST) in Manila to cheers, food and open arms from loved ones and supporters.

There was one member in the ritual “salubong” (welcome) who stood out: a man with a head full of white hair with his arm around his spouse. The woman, like many an examinee, must have felt a mix of nerves, shock and relief.

A video and pictures of the couple were captured by Vance Louie Garcia and posted on Facebook last Nov. 25. The post inspired many to tag their loved ones to do the same for them when their hair goes gray.

The examinee is 58-year-old Aimee de Guzman, better known as “Mommy Aimee,” she told INQUIRER.net exclusively. “I am not young anymore but I am neither too old to still dream.”

Her doting husband is Rico de Guzman, who will soon be 67. The couple has been happily married for 25 years.

Mommy Aimee has three siblings — two brothers and a sister — who were a constant source of encouragement as well. Her sister even pitched in to sponsor her review classes.

“During the bar exams, my husband, my son, my siblings and their respective families were my only bar operations,” she said. “While others had the facilities of their frats or sororities or orgs, mine was a bar ops group born out of love.”

The salubong was only one of many thoughtful gestures Rico did to support Mommy Aimee during the rigorous bar preparations and the hours-long exams.

“Rico would make the heartiest of omelettes, the tastiest of coffees and breakfast in bed,” she shared. “He would stay with me wide and awake for as long as his droopy, sleepy eyes could hold. He would pray with me and listen as I read [Bible] scriptures.”

The couple’s relationship defies stereotypes of romances — while some would be wary of a quick courtship, their first meeting and eventual marriage was completed all in a month.

When she first met Rico through a common friend, “I was way beyond my calendar age,” Mommy Aimee jokingly said.

How they both knew they were meant for each other was a matter of signs: “My sign was for the next guy to just say I am the heaven-sent girl he has been waiting for.”

True enough, on their first exchange, he said, “You know what, I prayed for a girl who will be sent to me from above!”

Although her heart was aflutter at his words, she managed to clarify with a “demure smile,” “You mean heaven-sent?”

“And so it happened that this ‘heaven-sent man’ will stand by the UST gate 25 years after, patiently waiting for his darling princess to emerge from the Dapitan Gate. Me, battered and beaten but still standing,” she said.

It is not Mommy Aimee’s first take since she finished law school in 1986 at Far Eastern University-Diliman. Just this year, she was convinced to take the bar again by her family.

She completed both her undergraduate degree in political science and master’s degree in public administration at the University of the Philippines-Diliman.

Decades in different careers would get in the way of her path in law, but would also anchor her back to it. Her jobs included nearly 10 years at the Department of Foreign Affairs (DFA), teaching stints and an administrative position in a school.

Incidentally, it was a court battle over an illegal termination that would inspire her to defend those wronged by the law.

When she was terminated by the president of the school she helped manage as an administrator and human resources manager, she fought for justice at the National Labor Relations Commission (NLRC). She would later win the case.

During her visits to the NLRC, she would see many at a disadvantage in similar situations: “I saw simple workers lined up, worried looks on their faces, no counsels representing them; dismissed employees frantically searching for answers on how to interpret processes.”

“I vowed to myself that I shall go back and study after I win my case,” she said.

Adding to her personal trials was her son’s near-fatal car crash in 2017. He had been the family’s breadwinner, so money became tight while he could not work.

Her husband cared for both mother and son, even accompanying Mommy Aimee during the labor case despite his own spine issues.

In the adversity, the family of three was brought closer together with prayer and they decided to live a simpler life away from the city. During this time, her sister and son encouraged her to take the bar. This, of course, was supported by Rico — it was her turn to pursue her dream.

‘You will make it’

Mommy Aimee was among the examinees placed in a room for people with special conditions, such as pregnant women, people with disabilities (PWDs) and senior citizens. She was in the same room, Room 127, as the oldest test-taker, 87-year-old Col. Ibarro Mariano.

She has pre-existing conditions of diabetes and hypertension, and on exam day, her blood pressure rose from her lack of sleep.

When she was wheeled into the room, she spent a few minutes in tears. Her fellow test-takers swooped in to support her: an old woman prayed over her while other seniors offered their essential oils. Ultimately, a “magically healing oil” from her seat mate, Maya Francisco, would soothe her throbbing headache.

The good colonel approached her to say, “You will make it!” She laughed, “He called me the crying lady!”

“I felt so proud for all of us inside that room,” she said. “That room was filled with valiant men and women… God bless them and our proctors as well.”

After she passes the bar — her “biggest mountain” — she hopes to have her first pro bono labor case.

Since her youth, she was exposed to defending the underserved through her father, labor lawyer Atty. Alfredo G. Pagulayan. He was also a commissioner at the National Police Commission. She recalled that even if her father did not get rich as a lawyer, their family did not run out of chickens and eggs, thanks to his pro bono clients.

She also wants to work again, returning to writing or teaching in college or law school.

For those who hope to become a lawyer later in life, she advised, “Believe that for as long as the heart keeps on beating, God is not done with us yet.”

She assured her fellow examinees, “Pass or fail, we are all victors in Christ.”

As for her loyal husband, she said, “I know he will continue to stand by the gate, no matter how long it shall take because I know he believes in me.” JB