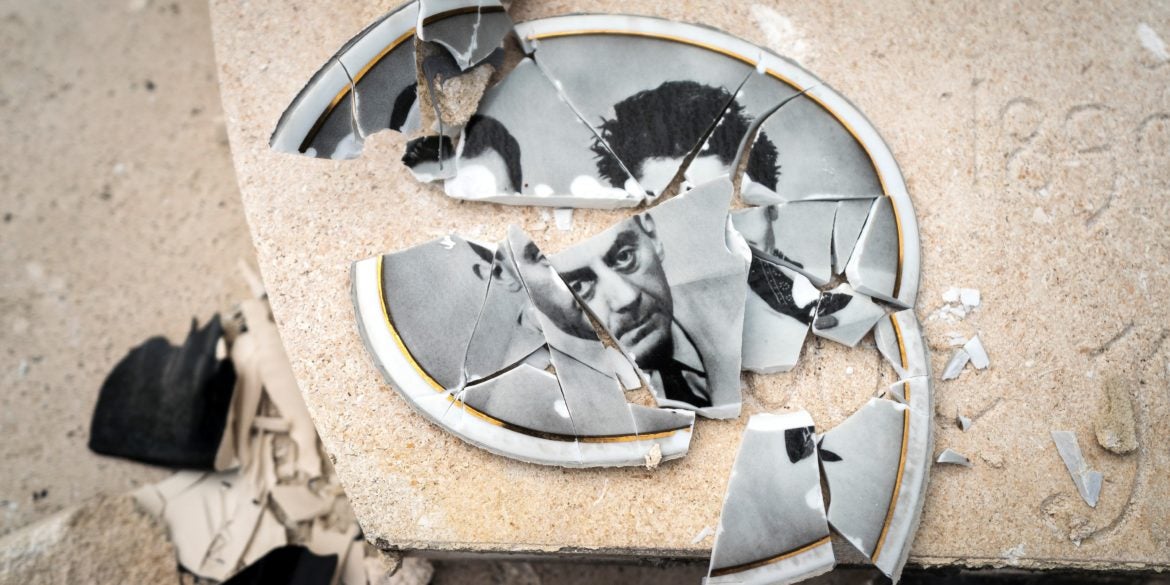 A picture of US photographer and artist Man Ray and his wife US dancer and model Juliet Man Ray sits on their vandalised grave at the Montparnasse cemetery in Paris on March 27, 2019. (Photo by Lionel BONAVENTURE / AFP)

The gravestone bearing the inscription, "Unconcerned but not indifferent", has been knocked over, as has a headstone added after the death of his wife, the dancer Juliet Browner, in 1991, carrying the inscription "Together again".

The tomb of the surrealist artist Man Ray in Paris has been desecrated, AFP discovered Wednesday.

The funeral stele appears to have been wrenched off the tomb in Montparnasse Cemetery and a portrait of the American artist and his wife on the grave smashed.

Man Ray — who has been called the “first Jewish avant-garde artist” — spent most of his life in the French capital, and was a major figure in both the Dada and Surrealistic movements, and a huge influence on fashion photography.

He died in Paris in 1976 and is buried not far from the Nobel prize-winning Irish playwright Samuel Beckett.

Man Ray’s gravestone bearing the inscription, “Unconcerned but not indifferent”, has been knocked over, as has a headstone added after the death of his wife, the dancer Juliet Browner, in 1991, carrying the inscription “Together again”.

A local council official said no complaint about vandalism has so far been made.

Man Ray is best known for “Ingre’s Violin”, a nude photomontage where he transformed the back of his lover and muse, singer Kiki de Montparnasse, into a violin.

As well as being a visual gag, “Ingre’s Violin” is a pun, the expression meaning a hobby in French.

The great 19th-century French painter Jean-Auguste-Dominique Ingres was passionate about the instrument although he never scaled the same heights with it as he did with his paintbrush.

Born Emmanuel Rudzitsky in Philadelphia in 1890, Man Ray was a star of Paris’ frenetic artistic scene between the wars alongside Picasso, Salvador Dali and Marcel Duchamps.

He fled the Nazis when they invaded France during World War II but returned from California in 1951 and spent the rest of his days in Paris.