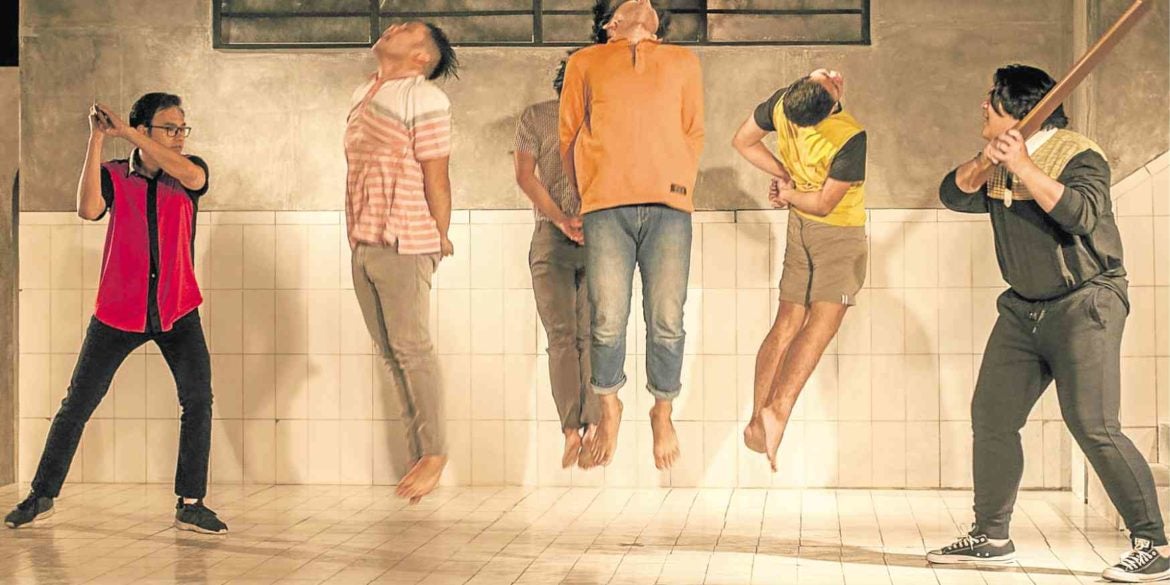 Tanghalang Ateneo’s ‘AKO’: Gripping, but why the hesitation

Tanghalang Ateneo’s “AKO: Alpha Kappa Omega” finds itself caught between past and present.

Based on the Mike de Leon film “Batch ’81,” the play successfully recaptures much of the emotional turmoil of its source material—mostly thanks to a dynamic core group of actors—while pushing the narrative into the 21st century in sensible ways.

However, “AKO” also frequently hesitates to expand upon the film’s ideas, falling back instead on comedy and cursory insights when faced with the opportunity to dig into the roots of fraternity culture.

Aesthetically speaking, this production is sure of its identity. Almost all of the action takes place against the dingy, bathroom-tiled basement that the titular frat calls home. Set designer Monica Sebial wisely keeps this stage front and center, with other corridors hidden in the wings, with only blinking yellow lights (care of lights designers D Cortezano and Jethro Nibaten) suggesting the existence of a world above, a world outside the concerns of “AKO.”

These aesthetic choices only heighten the story’s immediacy, which is amplified further by the play’s primal, threatening score (with sound design by Xander Soriano).

Where “AKO” shows indecision is in its treatment of the contradictory nature of frats. It definitely takes a clear moral stand, but too often does the production simply lean from horrific scenes of hazing and psychological torture to broad comedy. There is a statement being made here that these violent student groups appear to be just as capable of being fun as they are of being indescribably abusive.

However, when measured against the conclusions that the play arrives at, this treatment is a clear oversimplification. The production doesn’t succeed in injecting an undercurrent of menace into its more light-hearted scenes. It doesn’t embrace how positive and negative emotion can coexist in the same space.

There is also a somewhat successful attempt to tell this story through multiple perspectives, as opposed to just the one major point of view in “Batch ’81.” Unfortunately, these promising additional plot threads are ultimately drowned out by the play’s reverence for the film. When all is said and done, this is still the same story, detached from its original political context.

The extra details in these new subplots add weight and color to the themes that are already present, but they aren’t enough to totally recontextualize “AKO” for the Philippines of 2019, or elevate the discourse on frat culture.

Still, the production deserves credit for taking this story from the ’80s and making it more immediate and modern, without succumbing to the temptation of blaming technology or one generation of people.

Director Guelan Varela-Luarca (together with codirector Tara Jamora Oppen and choreographer Nicolo Ricardo Magno) orchestrate impressive tableaus that see the actors undergoing uncomfortably real initiation rites. The script (by Varela-Luarca, with a workshop by the entire ensemble) carves out subtle, new paths for most of the neophytes, resulting in a more overwhelming big picture of frat life. The systems that allow these student groups to continue are arguably clearer in “AKO” than they ever were in “Batch ’81.”

For all its hesitation to assume its own identity, “AKO” ultimately proves itself gripping, and simply too well-acted by its six neophytes to ignore. John Sanchez as Sid Lucero makes a chilling descent into this cutthroat lifestyle, as intended. Cholo Ledesma’s Pacoy hits an elusive sweet spot between pathetic naiveté and understated dignity. And Ron Capinding—as professor Santi Santillan, an older neophyte—easily acclimates himself among the boys while always seeming in over his head.

They are all only better together, a storm of conflicting desires and insecurities, grounded in false promises they need to believe. —CONTRIBUTED