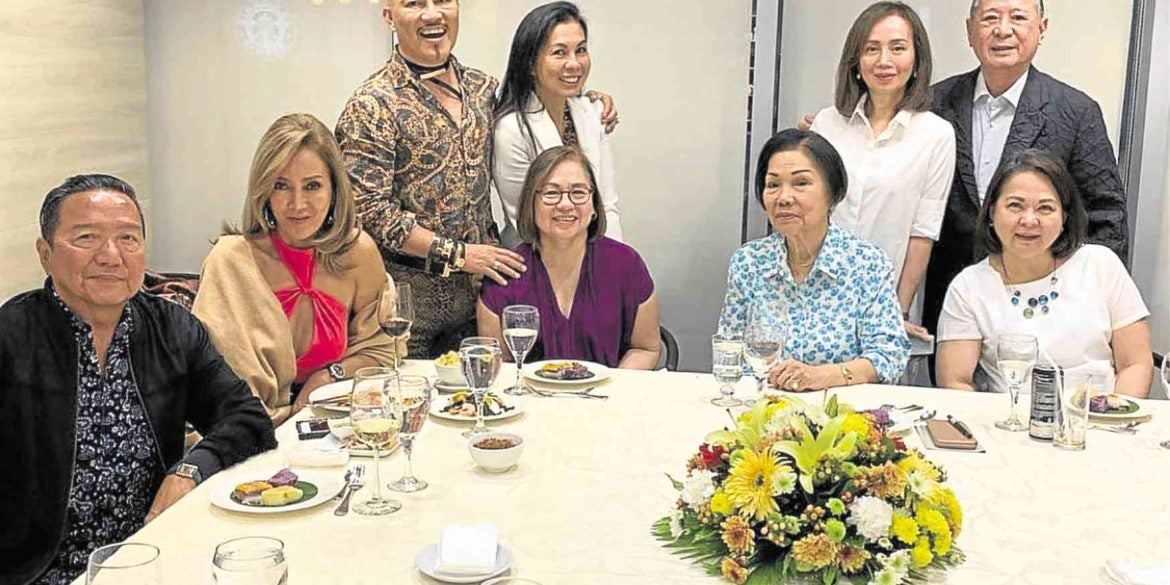 That was our incredulously mournful reaction as we learned of the sudden deaths of dear friends, one after the other, in just over a month: Cesar Gaupo, then James Reyes—two from fashion design in a little over a month; our own columnist George Sison, about two weeks ago; gallery founder Didi Dee; and just this week, Cathy Nazareno, whose inspiring life and battle with cancer Lifestyle wrote about last Christmas.

James’ death at only 48 was sudden, apparently of cardiac arrest. The fashion and theater circles, caught in disbelief of the loss, filled social media with memories, tributes to this versatile artist who was felled in midlife. (See Inquirer Lifestyle March 20).

I will always remember James as one of the easiest and most amiable designers to collaborate with. We regarded him as one of the top guns of his batch, who was always willing to join Inquirer Lifestyle’s competitive “Face-Off”—always certain of his design identity and direction, cool and oblivious to competition. That was why he was loved—he had no mean bone in a field fertilized by meanness and animosity.

George Sison did a French exit. He didn’t say goodbye—not to us, not to his friends, even the longtime ones. Early this year, he just sent word that he’d be on three-week leave from doing his Sunday column. Three weeks had passed and still no word from him.

He didn’t let on to friends that he had been battling leukemia, reportedly diagnosed only late last year. And friends thought this man, who spent his midlife preaching about and sharing positive thinking, happiness and the power of imaging and vision—claim it and the universe would grant it, was his mantra—could never be associated with dire news.

George had as many talents, as he had friends—a music composer (he wrote songs for Pilita Corrales, one of which was popularized by The Platters), a movie maker, a book author, a TV personality (with his bosom friend Elvira Manahan), a pre-martial law society columnist whose tirade and gossip landed him in detention, a restaurateur (the Star of Giorgio, which became the watering hole of the A-list in the ’80s), a life guru who drew a sizeable following to his Sunday “temple.”

In short, although born to wealth (his mother was of the moneyed De la Fuente clan and his father headed the top law firm of his day), he was rich but not idle. Rather, he mined the universe for whatever innate passion it could give him.

One could attach to George the mundane label of astrologer or seer or New Ager, yet he was not mundane. And he didn’t have a put-on profundity or glamour, either—he would have laughed at the florid, maudlin prose written posthumously about him.

To friends who had known him a lifetime (See related story on this page and page D3), George was fun—a spark of wit that would fly at the dinner table unexpectedly—a master of quotable one-liners, a source of laughter and also a source of strength. Friends don’t run out of stories of how he was a shoulder to lean on when the going got rough.

Although I had known of George as a controversial celebrity, I first met him only in mid-’80s, at dinner in a friend’s pad, where, as we reclined leisurely on throws strewn on the floor, he held court. I remember what he said—he believed that Marcos’ successor would be someone outside of politics, and possibly a woman. Uncanny.

Now friends, like Mario Katigbak, Glenda Barretto, Leo Valdez, who feel that their ties to George had no closure, have been getting together at dinners to reminisce about the guy. Rustan’s chair Nedy Tantoco, George’s longtime friend, hosted one such dinner last Friday for the closest of his friends. (Following his wish, there was no funeral wake for George, and  his ashes scattered in the Tagaytay mountains by his siblings.)

The last lunch I had with Hiraya Gallery owner and arts mover Didi Dee was end January. I didn’t know then that that would be the last time I’d see this dynamic woman whose views I enjoyed thoroughly, and whose company I found stimulating, especially when shared with another artist and jewelry icon, Hans Brumann and his wife Maria.

It was through Didi that I met Hans and Maria. Perhaps not so well known is the fact that the Swiss-born Hans adopted Filipino citizenship, and has been training generations of artisans in jewelry making.

To Hans and Maria, the Philippines is home, and Didi was family—the three would do Friday and Sunday lunches almost every week. Sometimes they would invite me, and we’d talk about jewelry, starting with  Hans’ early years in Switzerland, the arts scene, tennis because Hans and Maria are hardcore Federer fans, golf—anything under the sun.

I’d learn—and laugh a lot—from those lunches and dinners. Didi had a unique way of wrapping her ideals and vision in laughter, a woman who could mask her intensity.

She still had that girlish smile as I dropped her off at Greenbelt after that lunch, and wished her luck in her forthcoming chemotherapy. She was battling lymphoma.

We’ll always associate Didi with Phnom Penh and Siem Reap, which we explored with her for the magazine, and with top Cambodian designer Romyda Keth whom we met through her.

When friends pass away suddenly, you can only resort to a palliative—lunches and dinners where you bond over shared memories of the departed, the laughter and the tears.