Who would have thought the world-changing events such as the Cuban Missile Crisis and the Cold War had mutants involved?

In “X-Men: First Class,” a loose adaptation of the comic book of the same name, not only did mutants, led by director Matthew Vaughn, had a hand in rearranging historical events in human history but they also breathe fresh life to this superhero franchise which has produced two so-so films the past years. With a terrific cast, superb performances, a strong narrative, and well-executed special effects, the film evolves into a mutant itself—raising the bar for comic book-based superhero films and, in effect, giving the franchise more of a reboot rather than a prequel.

Set in a time when mutants are still coming out of the world, the film takes the viewer back to the 1960s when Professor X and Magneto are simply known as Charles Xavier (James McAvoy) and Erik Lensherr (Michael Fassbender), respectively, and are still learning their powers. Together, they lead a group of young mutants to stop Sebastian Shaw (Kevin Bacon), a villainous mutant, from igniting World War III.

Just like the first “X-Men,” the film begins with a clip showing a young Erik Lensherr forcibly separated from his parents in a Nazi concentration camp. But the film goes further and explains how Lensherr was not always an evil guy as he was actually pushed over the fence by a manipulative Sebastian Shaw who was then planning to start a global war.

Twenty years later, Lensherr seeks to exact revenge on Shaw, but he crosses paths with a young Charles Xavier, who is tapped by CIA agent Moira McTaggert (Rose Byrne) to stop the mutant villain as well.

Seeing the onscreen team-up of two iconic mutants who are future sworn enemies is not only a treat for geeks, but also for moviegoers who simply want to be entertained.

What follows is a whirlwind sequence around the globe—Las Vegas, Miami, Argentina, Oxford, Washington DC—as the duo attempts to recruit young mutants to help them fight Shaw, who has recruited superhuman friends of his own (there’s a surprising cameo here).

But while the film seemingly can’t stay put, it does maintain its focus on the most important aspect: the relationship between Charles Xavier and Magneto, which sets forth the formation of the X-Men and the Brotherhood, and which, not to mention, is the movie’s driving force.

Here we are shown how they were once best friends who share their deep love for their mutant kind until they differ and break up over the question of mutant assimilation.

Without a doubt, this is Fassbender’s coming-out role. He effortlessly eases into his role as easily as he can bend metal. While the past “X-Men” films have us loathing him as the villain, here we find us cheering for him as a hero after seeing his sad origins.

McAvoy does a laudable role as a sleek, smart Xavier. Also impressive is Jennifer Lawrence, who plays Mystique. Her story in the film, not to mention her chemistry with Xavier onscreen, dramatically reveals how she used to be much more than Magneto’s future sidekick. 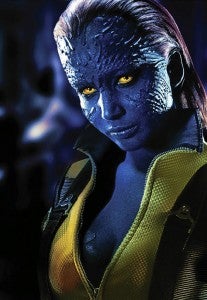 While most fans of the comic books may have mixed reactions about the different lineup of characters in the film (in the comics it was Cyclops, Angel, Beast, Girl and Professor X), the new characters inject new blood into the film as a whole. The new mutants—Havoc (Lucas Till), a female Angel (Zoe Kravitz), Banshee (Caleb Landry Jones) together with a young Beast (Nicholas Hoult)— make notable debuts but receive too little screen time for us to become really familiar with them.

But they’re involved in arguably the film’s coolest scene—donning (with Magneto) the original X-men costumes.

The finale, as expected, lays the groundwork for Xavier and Magneto’s future enmity. But the way “X-Men First Class” ends —underdeveloped characters, loopholes, and Fassbender’s potential to really develop Magneto’s character—just makes us beg for a “first class” sequel.