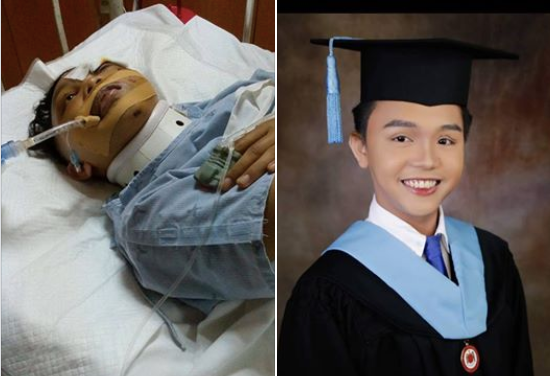 Laguna student who woke up from coma perseveres and graduates

“Success is no accident… Ang hirap sigurong paniwalaan na nakarating pa ako dito.” (It may be hard to believe that I made it this far.)

This is what Nikee Strada Laderas of Colegio San Agustin-Biñan said in his Facebook post on Tuesday which has now gone viral, where he shared how he overcame a life-threatening accident and was later able to finish his studies this year.

“August 31, 2017 – the day when I experienced severe motorcycle crash. I was on my way home when suddenly, may nakabangaan akong kotse (I collided with a car). It was a traumatic retention. A hell of a nightmare,” wrote Laderas.

He narrated that after the accident, he fell into a coma. The doctors told his parents that should he survive, he will only be in a vegetative state. After four days, he woke up, surprised to see people waiting for him to get back to consciousness.

The recovery process was not easy for Laderas, as he recalls going in and out of the hospital, undergoing a series of surgeries, needing to wear a neck brace, having blood transfusions, and being examined with X-ray and CT scan machines before every operation.

(After roughly two and a half months of recovery and two weeks after my surgery, I insisted to go back to school. I lost eight subjects and dropped all my subjects for one semester, so I have to make up for all of it to graduate on the same year with my batchmates.)

Though it was hard to cope, Laderas did everything he could to make up with the school requirements he missed. He did not even mind going to school in a wheelchair.

(I was not embarrassed to go to school in a wheelchair, I am proud to go back because it means the prayers have been answered. While adjusting and recovering, I did my thesis, productions, statistics and took all the subjects I needed to take.)

Having experienced all of these, which he regards as his “2nd chance [at] Life,” Laderas thanked all the people who have been there for him, all throughout his journey.

(Thank you to everyone who helped me reach this unexpected triumph.) JB