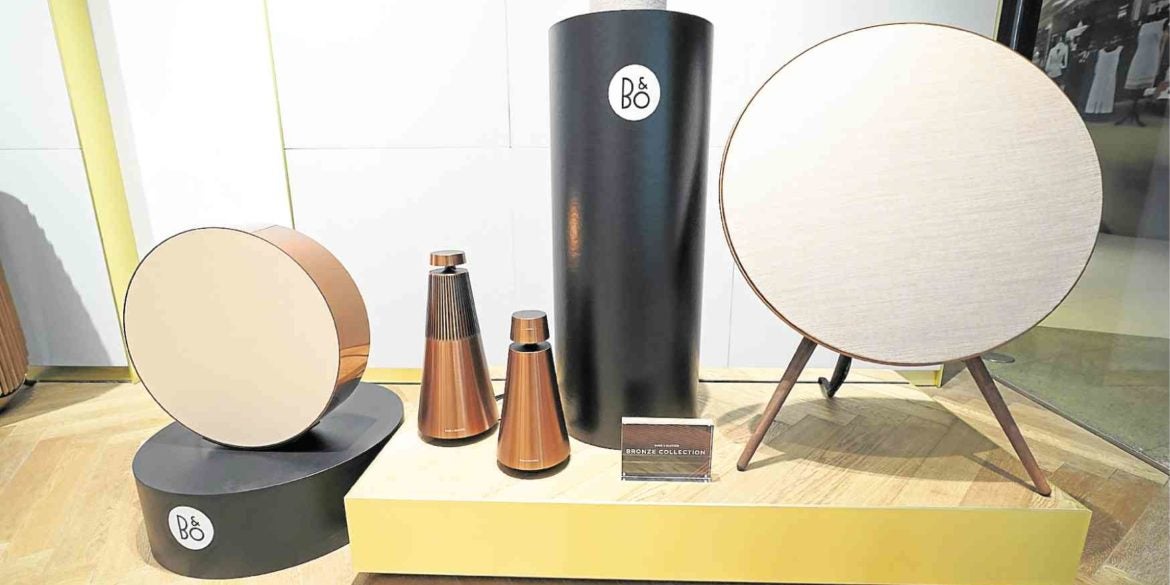 Taking inspiration from the architectural and interior trends of using warm colors and contrasting materials, Bang & Olufsen introduces the limited-edition Bronze Collection of its most popular multi-room speakers.

Another impressive sonic centerpiece has just been rolled out by Bang & Olufsen, the 94-year-old Danish electronics company known for pushing the boundaries of audio design.

Its latest conversation piece, BeoSound Edge, is a wireless, 20-inch circular powerhouse of a speaker, a collaboration with London-based designer Michael Anastassiades, one of the top talents working in the visual field today. Anastassiades took inspiration from the British one-pound coin that he saw standing upright on a table one day.

Made of one-piece seamless, high-grade aluminum, BeoSound Edge blasts high-fidelity audio—
800 watts of amplification divided between a 10-inch woofer, a pair of four-inch midrange drivers, a pair of 3/4-inch tweeters, and a hidden port in the front that can open to boost bass levels.

Bang & Olufsen is celebrated for its show-stopping, often outrageous aesthetics. But it is never mundane. So, the sonic performance, as expected, is just as good as it looks.

Kalle explained that the high-grade aluminum underwent several processes in Bang & Olufsen’s own labs to become the perfect circular frame required for the BeoSound Edge.

The speaker is also fitted with the world’s first active bass port, a technology that combines the two classical concepts of speaker design: closed box, and ported structures.

At low volume, the speaker sticks to the closed-cabinet principle for more accurate sound reproduction. But at high volume, the active bass port opens up to shift more air and offer a more powerful bass performance.

Each driver gets its own amplifier, so a total of six amplifiers power this speaker. In short, the BeoSound Edge is one of the most powerful wireless speakers Bang & Olufsen has created.

The speaker invites the listener to interact with it. The volume adjustment is made by rolling the speaker back and forth. Roll forward to turn up the volume, and roll backward to turn it down. The change in volume is gradual so the listener is not startled.

The speaker has proximity sensors that detect a person who’s approaching it. Lights on the top control pad illuminate the touch interface. It has directional sound control, which allows the user to control the sound direction, creating two acoustic fronts—meaning a room can be divided into an active or passive listening area.

There is also an option for 360-degree omnidirectional sound from both sides of the speaker to fill the entire space.

“Bang & Olufsen is a leading luxury lifestyle brand steeped in rich history,” said Ferdie Ong, general manager of Living Innovations, official distributor of Bang & Olufsen in Manila. “Coming from a long line of innovators since 1925, it is known for its unique way of combining sound, design and craft—the three pillars that define the brand and give rise to a collection that is highly sought after.”

Its circular shape allows for two placement options: on the floor or mounted on the wall, akin to clocks seen in train stations across Europe.