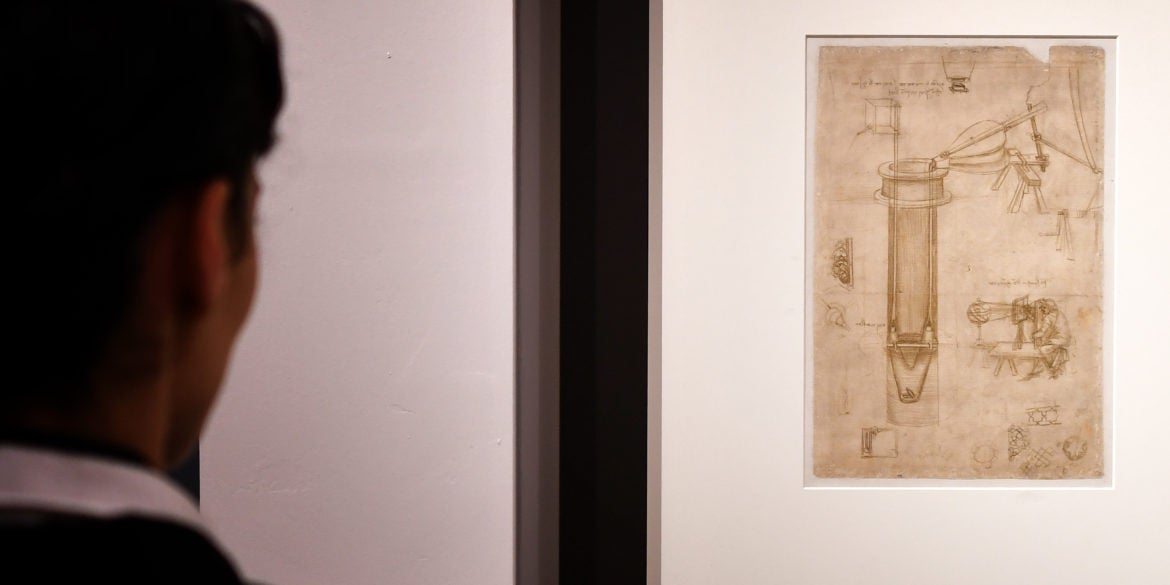 A visitor watches Leonardo da Vinci's "Study for a hydraulic pump, man with a perspectograph (Codex Atlanticus)" during the exhibition "Science Before Science" (La Scienza prima della Scienza) on March 12, 2019 at the Scuderie del Quirinale palace in Rome. (Photo by Alberto PIZZOLI / AFP)

Researchers at the Uffizi Gallery in Florence have proved what was suspected for a long time: that Renaissance genius Leonardo Da Vinci was able to write, draw and paint with both hands.

The museum’s research and restoration institute confirmed Da Vinci’s ambidexterity by analysing a drawing known simply as Landscape (8P), believed to be his earliest work, dated 1473, when the artist was 21.

The drawing of the Arno river which flows through Florence and the castle of Montelupo in the background also features two handwritten text inscriptions, one on the front written backwards and another on the back written left to right.

Researchers showed that both inscriptions were done by the artist who “used his left hand to write the inscription in ‘mirror writing’ on the front, while he used his right hand to pen the inscription on the back in ordinary writing,” the Uffizi said in a statement.

“Leonardo was born left-handed but he was ‘re-educated’ at a very early age to use the right hand,” said art historian Cecilia Frosinini.

“From an observation of his handwriting, including the inscriptions on this drawing, it is clear that his writing as a right-hander was both cultivated and well formed,” she said.

“Leonardo was eminently capable of using his right hand… Our hypothesis is that the idea came to him from his observation of the writing in reverse on the tracing paper that he used for his drawings after turning them over.”

The research was completed ahead of the drawing’s return to Leonardo’s birthplace, Vinci, as part of an exhibition to mark 500 years since his death.