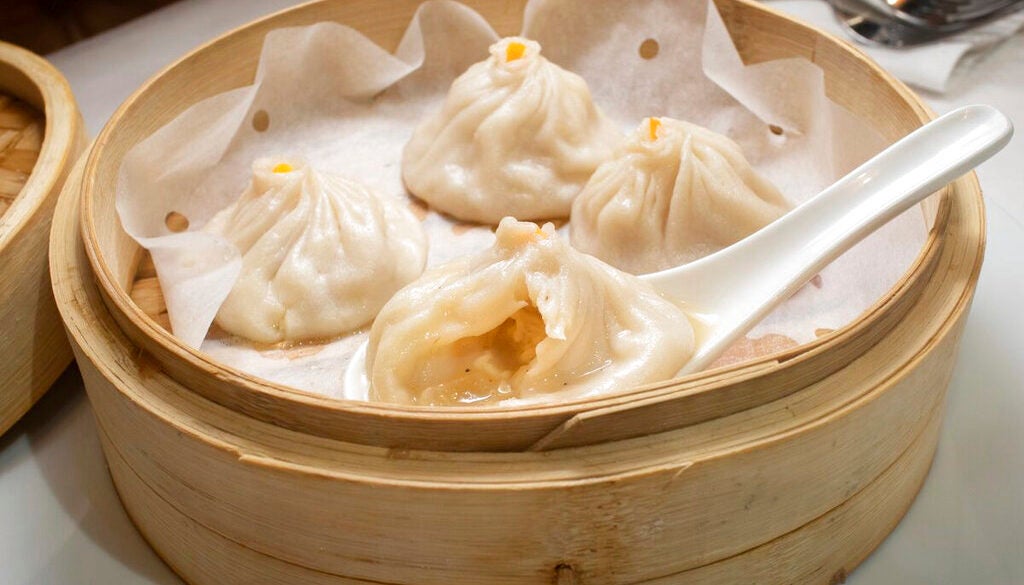 This undated photo provided by Stratis Morfogen in April 2019 shows the French onion soup dumplings at Brooklyn Chop House in New York City. Morfogen, who is of Greek descent, doesn’t spend time worrying about the cultural appropriation accusations his steakhouse has received for its Chinese-inspired items. (Daniel Kwak/Stratis Morfogen via AP)

A New York City restaurant owner who touted her “clean” American-Chinese cuisine and derided Chinese dishes as swimming in “globs of processed butter,” sodium and MSG is renewing the long-simmering debate about stereotyping and cultural appropriation in the restaurant world.

Arielle Haspel, who is white and a certified health coach, told the dining website Eater that she wanted to offer modified, “clean” versions of typical Chinese menu items. In a now deleted Instagram post, Haspel said that a Chinese noodle dish, lo mein, can make people feel “bloated and icky.”

Haspel has since apologized, but her comments are the latest misstep in a succession of restaurateurs and TV chefs who have been criticized for insensitivity when dealing with food from a culture that’s not their own.

Robert Ku, a professor of Asian American studies and food studies at Binghamton University, New York, said Haspel came off as relying on age-old stereotypes of Chinese food being unsanitary or grotesque. It was especially tone-deaf in New York City where most locals regularly eat Chinese food, he added.

“These are long-standing tropes that have followed specifically Chinese food more than any other cuisine,” said Ku, who has written about the cultural politics of Asian food in the U.S. “What she’s focused on is health and being clean, which implies the others were not.”

He also said it’s a myth that Chinese-American restaurants use MSG. Most cut it out of their kitchens in the 1970s because it was so unpopular, making Haspel’s reference problematic, Ku said.

Haspel was apologetic in an interview Friday with the New York Times .

“We were never trying to do something against the Chinese community. We thought we were complementing an incredibly important cuisine, in a way that would cater to people that had certain dietary requirements,” she said. “Shame on us for not being smarter about cultural sensitivities.

She previously acknowledged the uproar via Instagram and promised to listen and reflect on people’s comments.

She did not return messages from the AP seeking comment.

White TV chefs like Andrew Zimmern and Gordon Ramsay have been skewered for their respective Asian restaurants (both of which also use the adjective “lucky” in their name).

Zimmern last year said in an interview that his Lucky Cricket restaurant in Minnesota was saving the souls of people who dine at “(expletive) restaurants masquerading as Chinese food” in the Midwest. The “Bizarre Foods” host later apologized.

Ramsay, who is British, is opening the Japanese-inspired Lucky Cat restaurant in London this summer. In a press release in February, the “Kitchen Nightmares” star promised a restaurant that would be “revolutionary” and “authentic,” but many noted the lack of Asians in key executive positions.

On the flipside, there are chefs who have earned reputations as visionaries for mixing cuisines. Chef Roy Choi elevated the food truck when his Kogi BBQ hit the streets of Los Angeles in 2008. Choi combined his Korean roots with tortillas and came up with mouthwatering munchies like Korean short rib tacos.

Being against cultural appropriation doesn’t necessarily mean being against anyone cooking outside of their own ethnicity or culture, said Ku, the professor. It’s the line between appropriation and appreciation where things can get tenuous.

“What people are reacting to is saying ‘For generations, Chinese in America were doing stuff but they did it horribly. As a white person, I can do it better,'” Ku said.

New York restaurateur Stratis Morfogen, who is of Greek descent, doesn’t worry about the cultural appropriation accusations against his steakhouse for its Chinese-inspired items.

“If people didn’t move forward or innovate or create and fuse different cultures together, the culinary landscape would be pretty boring,” Morfogen said.

Morfogen employs more than 15 chefs from China across his restaurants and a Chinese chef is also one of his partners. He thinks restaurant owners worried about inadvertently stereotyping just need to think twice before they speak.

“I really believe that those words are insensitive and it hurts people,” Morfogen said. “I don’t think that is what food is meant to be. I think food is meant to bring all the cultures together and respect each other.”