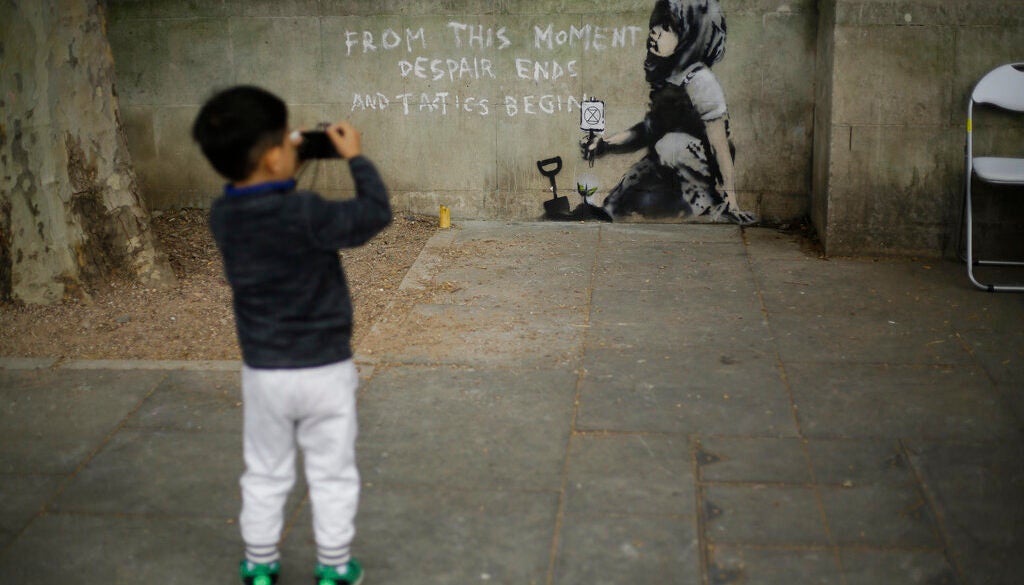 A young boy points a camera he was playing with towards a new piece of street art believed to be by street artist Banksy on a wall where Extinction Rebellion climate protesters had set up a camp in Marble Arch, London, Friday, April 26, 2019. Image: AP Photo/Matt Dunham

LONDON — Officials in London are trying to determine if a stenciled mural that appeared at a base camp for climate protests was created by the street artist Banksy.

The mural is on a wall at Marble Arch, where the group Extinction Rebellion had an encampment for 10 days until Thursday and disrupted transportation in the British capital with daily, targeted non-violent protests.

The artwork shows a child holding an Extinction Rebellion sign beside the words “From this moment despair ends and tactics begin.”

Nickie Aiken, the leader of Westminster Council, a local authority that oversees the area, said “we believe it’s genuine and are working to confirm that it is the case.”

“This street art has clearly captured the public mood and imagination, and so we’re looking to keep it in a public place for people to enjoy,” she said.

More than 1,100 people were arrested for blocking roads and bridges during more than a week of Extinction Rebellion protests aimed at alerting the public and politicians to the “climate emergency.”

Banksy, who has never disclosed his full identity, began his career spray-painting buildings in Bristol, England. He has become one of the world’s best-known artists through works tinged with satire and social commentary.

Last year his painting “Girl With Balloon” sold for 1 million pounds ($1.3 million) at a Sotheby’s auction — and was immediately partially destroyed by a shredder that the artist had concealed in the frame.

The buyer went ahead with the purchase. NVG