Notre-Dame: The ‘Lady of Paris’ will bloom again | Inquirer Lifestyle 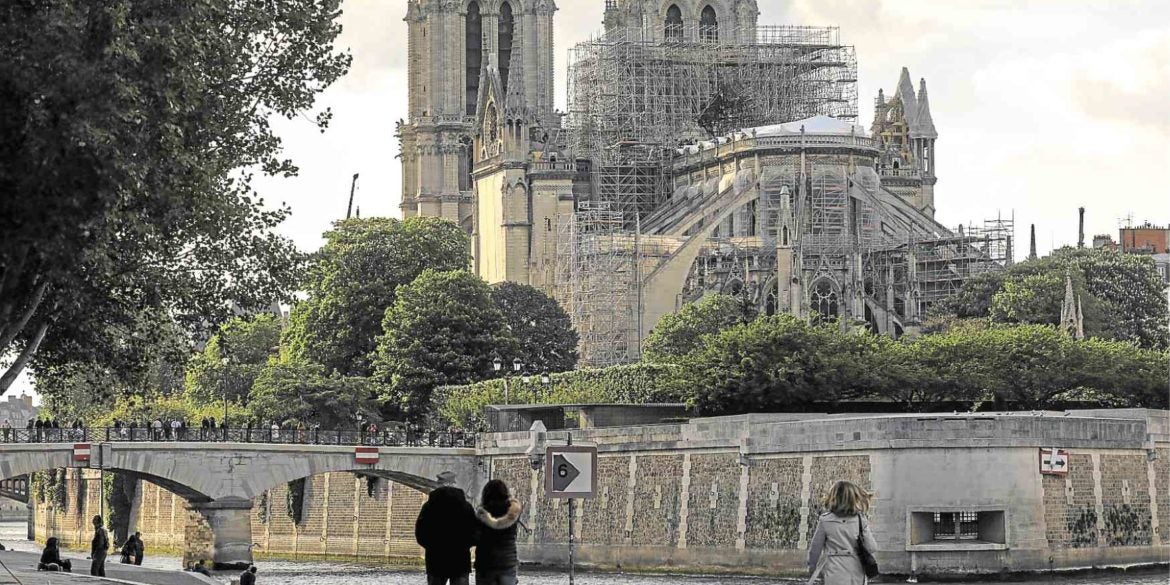 Notre-Dame: The ‘Lady of Paris’ will bloom again

Shock and sadness gripped me while watching on television the Notre-Dame of Paris being engulfed in flames on my departed daughter’s birthday last April 15.

It doesn’t matter if my husband and I were just two of more than 12 million tourists a year who visited the iconic church. Or if other holy structures also burned that day. Setting foot on it, if only once, was enough to make me shudder in grief. My Quasimodo has died.

Declared a Unesco World Heritage Site in 1991, the 856-year-old French Gothic cathedral is steeped in history. It was where the so-called yellow vests held recent massive rallies against the ruling Macron government. Further up history lane, it was here that Napoleon Bonaparte was consecrated emperor in 1804. Here also was where King Henry VI of England was crowned king of France in 1431.

Most beloved by the French, if not all Europeans, Notre-Dame withstood two world wars with its most sacred relic, Jesus’ Crown of Thorns. Only during the French Revolution in the 1790s was it desecrated, most of its religious images destroyed.

Cracks on its edifice were found, so renovation had to start last year. But now the world will have to wait longer for its full restoration.

“It’s a colossal task,” Pierluigi Pericolo, a prominent French conservation architect, was quoted as saying. “It would take no less than 15 years.”

I kept switching channels—BBC, Al Jazeera, CNN—to watch footage of the conflagration. I felt very sad. In May 2016, following my retirement from the corporate world, my husband, UP professor Mario I. Miclat, and I went to Paris (and other European cities) to see the Louvre Museum, the Eiffel Tower, and, of course, the Notre-Dame.

I had been dreaming of going to Paris, the City of Love, especially since our departed daughter Maningning went there at age 24—20 years before we did. She wrote about her fascination with its magnificent, iconic buildings, haunted as she was by the Louvre Museum and its art treasures, relics and antiquities. And she loved Notre-Dame.

From London, our British friend Yvonne booked for us the Familia Hotel on rue d’Ecoles. Mario and I took the train from London to Gare du Nord, said to be the busiest railway station in Europe.

From there we took Line #4 going to Porte d’Orleans, got off at Odeon for Line #10, went to Gare d’Austerlitz to get off at Cardinal Lemoine and, dragging along our luggage, walked to the hotel.

It was ideally located. The Louvre was just one Metro ride away by Line #7, the Eiffel Tower was by Bus #63 to Trocadero, while Musee d’Orsay was by another bus on rue de Lille.

Save for encounters with a rude tricycle boy and a restaurant waiter who added to our bill a dish we did not order (we only found out later), we had a most pleasant Paris experience. In a street corner, we met an American couple who did some research on the Filipino-American war of the early 1900s. An old bachelor toured us around the Louvre, gratis. He left us only when the museum was about to close, and we wanted to rush to the section that displayed Philippine anitos.

From our hotel, we could walk leisurely to the Notre-Dame, so our concierge said. So we walked—up to the River Seine. Mario was getting tired and went to a small shop to ask how far it could still be. I threw a glance to the right and there she was, the glorious “Lady of Paris”!

Like most Filipinos, I came to know of this church through the novel “Hunchback of Notre Dame” (Notre-Dame de Paris). When Victor Hugo wrote his novel in 1831, the church was in horrific disrepair, much neglected and vandalized. As we know, the novel became a smash hit that, 13 years after, King Louis Philippe ordered the church’s restoration.

The project took 25 years to finish, what with its taller and more ornate spire. It was that same spire that came toppling down during the fire, as captured on video cameras.

According to reports, the novel is making big waves again and has become the bestseller since the April 15 fire. Likewise, Walt Disney’s 1996 animated “Hunchback of Notre Dame” film is surging back in popularity. How I wish the 1939 American film starring Charles Laughton as Quasimodo and Maureen O’Hara as Esmeralda, had its modern rerun.

A Vietnamese tourist volunteered to take our picture in front of the Notre-Dame. He heard us speaking in Filipino and was pleased to offer his service, having known many of our friendly kababayan back in Ho Chi Minh City.

Entering the cathedral was an overwhelming experience. The stained-glass windows alone, particularly the three rose windows, were an exquisite sight to behold.

The west rose window, said to be built in 1225, was the first and smallest of the roses in Notre-Dame. The north rose window, made in 1250, had eight lower vertical windows. That of the south, made in 1260, was made up of 84 panels. I heave a sigh of relief hearing the news that the rose windows have survived the fire.

So were six other valuables in its possession: Christ’s Crown of Thorns; the tunic of 13th-century crusader King Louis IX, later declared Saint Louis; 13 17th- and 18th-century paintings known as the “Mays”; 16 bronze statues depicting the 12 Apostles and the New Testament’s four Evangelists; 19th-century symphonic organ with five keyboards and 8,000 pipes believed to date back to the Middle Ages; and bells, the oldest of which, called “Emmanuel,” has been in situ since 1861 and was tolled to mark the end of WWII.

In “Hunchback,” Hugo wrote “great edifices, like great mountains, are the work of centuries. Art often undergoes a transformation while they are pending, pendent opera interrupta; they proceed quietly in accordance with the transformed art.”

His classic novel was instrumental in changing the face of the Notre-Dame back when the cathedral was crumbling.

Today, President Emmanuel Macron wants it restored in five years, in time for the 2024 Olympics to be held in France. Conservationists, designers, architects and engineers are not as hopeful. But almost a billion euros from moguls, as well as ordinary citizens, have been raised, and just as in Hugo’s time, the amazing Lady of Paris may not only regain its glory but may bloom even lovelier. —CONTRIBUTED