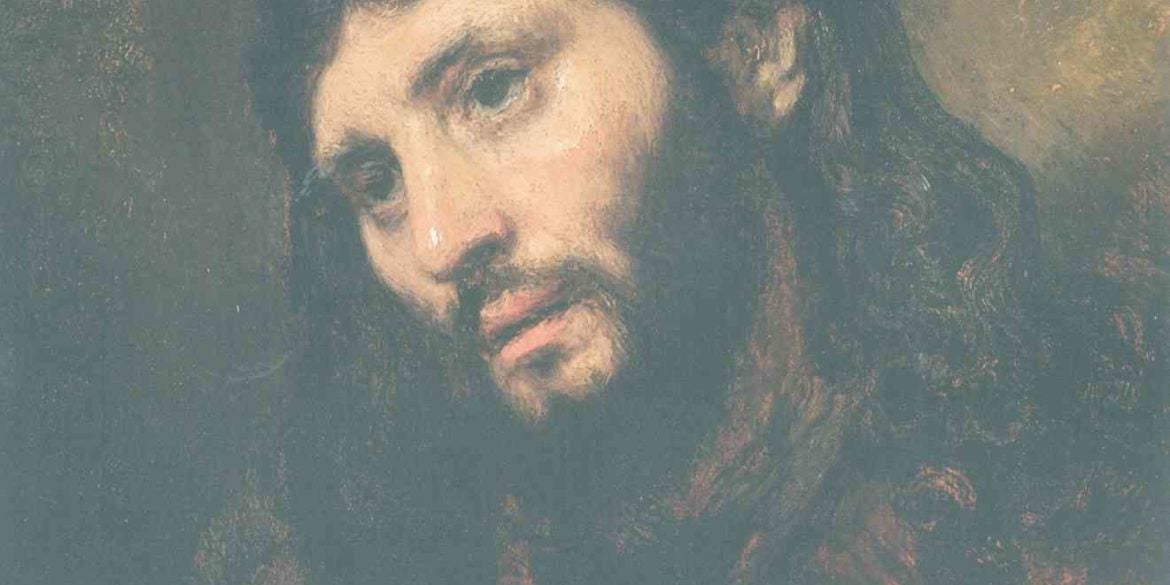 “Head of a Young Man, with Clasped Hands: Study of the Figure of Christ” by Rembrandt van Rijn

It is quite a jolt to the senses seeing the works of the Dutch masters of light—Rembrandt Van Ryn and Johannes Vermeer—hanging at  the Louvre Abu Dhabi in the United Arab Emirates. Value lighting and climate control in the dark halls of the biggest art and civilization museum in the Arab world may somehow transpose viewers to the paintings’ original socio-geographical context—the Netherlands of the temperate maritime climate with generally pleasant summers and quite cold and dark winters—but only for a moment. When viewers come out of the exhibition halls, they inevitably will have to contend with the everyday reality of Arab climate: hot and sweltering with the omnipresent sun and its searing silver glare here, there and everywhere.

Which is why perhaps the Louvre Abu Dhabi’s first international exhibit for 2019, “Rembrandt, Vermeer and the Dutch Golden Age,” was opened in the most pleasant month of February, characterized by cold windy nights, and it will end this May 18, still far from the harsh summer months of July and August when temperature is said to reach 55 degrees Celsius. By then, the lambent light of a Rembrandt or a Vermeer would be no match to the stringent flare of the Arab sun.

It is the first time in the Middle East for 16 paintings of Rembrandt (1606-1669) to be exhibited there, including Louvre Abu Dhabi’s newest acquisition, “Head of a Young Man with Clasped Hands: Study of the Figure of Jesus Christ.”

Forget for the moment “Salvator Mundi,” the controversial painting of Jesus Christ attributed to Leonardo da Vinci by the National Gallery of London and sold by Christie’s in 2017 for a pharaonic $450 million to Abu Dhabi, making it the most expensive painting in the world. “Salvator Mundi” was supposed to be displayed finally by the Louvre Abu Dhabi last September, but the UAE Department of Culture and Tourism suspended the exhibit indefinitely. It is just as well, since Rembrandt’s study provides a humanistic, psychological counterpoint to the triumphalism of “Salvator Mundi.”

Moreover, the painting (circa 1646-1656) embodies the Dutch master’s creative process. As Manuel Rebate, director of Louvre Abu Dhabi, points out in the catalogue, the study made around the time of Rembrandt’s self-portraits characterized by vigorous brushwork and intensity of expression, embodies “the quintessence of this process.” “The use of a live model, most likely a member of the community where the artist worked, revolutionized the representation of Christ by giving him the features of a man,” Rabate writes.

The exhibit consists of 66 works from the Leiden Collection based in New  York of Thomas S. Kaplan and Daphne Recanati Kaplan in dialogue with related paintings and drawings from the Louvre of Paris.

Curated by Blaise Ducos of the Louvre and Lara Yeager-Craselt of the Leiden Collection, the Dutch works from the two sources are hung side by side and although the result is not so much dialogue as comparison and contrast, the overall effect is one of complementarity and concord.

But the most striking contrast is not Rembrandt’s but Vermeer’s  (1632-75), perhaps because the quiet Dutch master is represented by two very strong paintings—“The Lacemaker” (circa 1669-70) from the Louvre and “Young Woman Seated at a Virginal (1670-72) from the Leiden Collection. Both quiet domestic scenes involving a woman, they seem to go beyond their narrow confines, with the splendor of the color and the rendering of the light seeming to animate and revivify them, like minute crystals that have been daubed here and there, making the work throb with quiet intensity.

After Rembrandt and Vermeer, the wider subject of the exhibit is “Fijnschilderij,” or “fine painting.” This was Dutch genre painting that emerged in the first half of the 17th century consisting of portraiture and depictions of everyday life. It originated from the artistic innovations of Gerrit Dou, a pupil of Rembrandt.

Dou (1613-1675) is best known for “illusionism,” depicting figures set in stone window ledges, such as the Leiden’s “Cat Crouching on the Ledge of an Artist’s Atelier” and the Louvre’s “Young Woman Holding a Fowl at a Window,” remarkable for their illusion of depth.

But perhaps even more remarkable are Dou’s “contemplative” paintings, showing scholars at work, such as the Leiden’s “Scholar Interrupted at his Writing” and the Louvre’s “Scholar Sharpening his Quill.” As in Rembrandt’s “Allegory” paintings, Dou shows a knack for characterization and using light to evoke a sense of drama.

For a non-Western audience, the exhibit is an eye-opener and should make room for Dutch achievement in the rather restricted confines of Western art dominated by Latin figures.

But another eye-opener—or perhaps more of a conundrum—is how that achievement came to be.

Rembrandt had come from common stock. He also didn’t travel to Italy; he imbibed the influence of Caravaggio merely second-hand through the Northern artists who did go to Italy and experienced the works of the Italian master of light and shadow. A functionary in Leiden made this note about Rembrandt and his friendly rival, Jan Lievens, in 1628: the latter was a “commoner,” with an “embroiderer for a father,” while Rembrandt’s father was “a miller.” “Who would not be astounded that these two could produce such miracles of talent and skills from these origins?”

Ducos in her catalog essay refers to the “Dutch miracle.” It is due to nothing less than the creation of the “Republic of the Seven United Netherlands” after the successful war of independence against Spain. The Dutch  later took the war against their former sovereign overseas. (Our own fiesta of the Nuestra Senora de Santo Rosario de La Naval de Manila commemorates the Philippine and Spanish naval victory over the invading Dutch armada in 1646.)

The Dutch thereby established their own empire, occupying Indonesia for example and centering their activities in Asia in “Batavia” (Jakarta).

The Dutch East Indies and the Dutch empire may now be gone,  but when we say  the Netherlands nowadays, they include  island-territories in the Caribbean—Bonaire, Sint Eustatius and Saba.

To Ducos, Dutch discovery of a wider world other than the Low Countries contributed to the “Dutch miracle.” No wonder many of the Dutch paintings show the globe, as in Dou’s paintings of scholars.

“The accumulation of wealth in the Dutch metropole can only be understood in the light of what took place in New Netherlands in Manhattan Island, in the Caribbean, in Brazil, in Asia, in West Africa and at the Cape, and also the Baltic,” Ducos writes. “The artists active during this Dutch spring developed a sense of wonder of the Orient… As for the globes… they show that Dutch identity in the Golden Age was inseparable from a science simultaneously global and Eurocentric.”