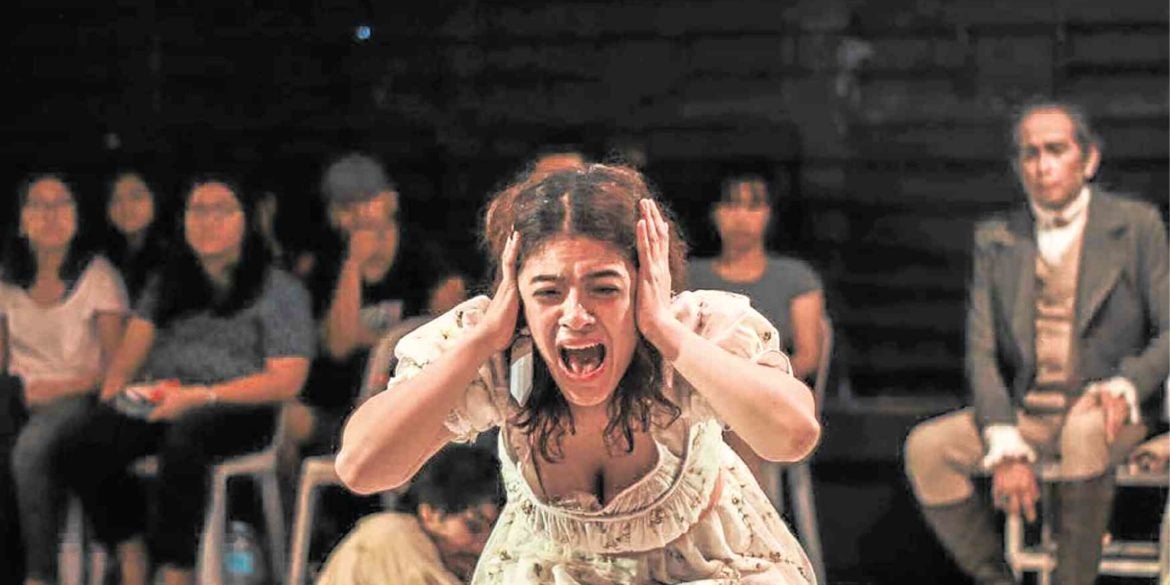 The past weekend of theatergoing can be summed up by the words of the esteemed playwright Glenn Sevilla Mas, who, in an exclusive interview last year, had this to say about the state of Filipino theater: “The future is bright because the future is here.”

Take, for instance, Far Eastern University Theater Guild’s “Saltik,” a collection of eight one-act plays, many written by student-members of the company and all of them directed by Dudz Teraña.

The production as a whole commits the rookie mistake of equating noise with emotion, and some of the plays can get quite derivative and gimmicky. All understandable: The show, after all, is billed as a lab, meaning it is the proper, if not the only, place for such faults.

It is also an ideal place to push boundaries, which is exactly what “Saltik” surprisingly does. For example, Marielle Barrios’ “Daungan,” despite being in need of much tightening, manages to give the classic father-and-son tandem a welcome speculative-fiction twist.

Hanna Pelobello’s psychodrama “Rachel” is a display of bravura staging, as Teraña anthropomorphizes the various voices and past lives inhabiting the disturbed titular character’s head.

The best of the lot is “Proposal,” a Bisaya monologue written by Teraña himself (and here, one suspects it’s a case of the director knowing exactly what to do with the material). Mapping out the rise and violent decline of a relationship from the woman’s point of view, the play is told with admirable clarity, largely thanks to Karyl Oliva, in a flat-out delightful performance.

At the Ateneo de Manila University, another monologue gave birth to a star: Maia Dapul in “Unperfect,” a devised performance piece directed by Jerry Respeto that culled existing songs from the likes of “Next to Normal,” “Kung Paano Ako Naging Leading Lady” and “Real-Life Fairytales.”

It was essentially a skeletal rendering of a woman’s life from womb to tragic tomb, a musical exploration on the damage wrought by being brought up under the concept of perfection and having that concept somehow taken away later on.

The piece itself stood out for its economy of words, its translation to the stage acquiring a sort of poetic quality, as well as for the way it reinterpreted the selected songs to fit its female-centric narrative. Dapul was a blazing, transfixing presence, her delineations of character and setting clear-cut, her performance a fiery announcement of a serious new entrant to the world of musical theater.

“Unperfect” was one of two thesis plays lumped together under the twin bill titled “G/irl/.” The other was “A Doll Life”—the more ambitious but less focused piece—starring Alyssa Jamille Binay, Senanda Gomez and Chrisse Joy delos Santos (with further input for the play from Iman Ampatuan).

The feminism was more accessible in “A Doll Life,” where the trio of student-actresses played dolls that somehow come to life (or something akin to it). But the play, in extensively critiquing women’s roles in society, also involved a lot of sidetracking and fun but unnecessary banter.

It was strongest—both in terms of writing and performance—when it reached its culminating monologues, which allowed the actresses to be their own persons and enchantingly deliver their respective texts.

On several levels, the play was a challenge: Its dialogue was laced with cerebral polemics on matters such as revolution and class struggle; and its play-within-a-play setup required a cast that could pull off playing asylum inmates struggling to play relatively sane people.

It also had to be staged in a way that combined elaborate, period-drama flamboyance with low-key horror-house theatrics, while somehow making the intellectual back-and-forth less esoteric for the viewer.

None of which the production, directed by Joy Cerro, surmounted unequivocally. And because this was a play that, when steered inadequately, became even more perplexing, it was obvious to the viewer whenever the production sagged.

That also means that whenever this production soared, it was an enthralling sight to behold. It knew horror and gore better than the other dramatic elements, and that translated to the staging and the acting, such as that scene when the seams between reality and make-believe first gave way, or in that horrific denouement.

The only ones among the cast who were believable asylum patients were Xander Soriano (commanding as Marat chained to a bathtub), Sheryll Ceasico (her affectless, almost-wordless turn a lesson on consistency) and Hariette Damole (incandescent, gripping, almost pitiful as the unfortunate, internally splintered soul tasked to play the murderous Charlotte Corday; an acting thesis that clearly deserved a 1.0).

The inadvertent runaway star of “Marat/Sade,” however, was Adrianna Agcaoili. As the bourgeois hospital director’s wife, she had zero lines, but her face was worth a thousand GIFs. And if the students learned a thing or two from her about silently running the show from the sidelines, that could only be for the better.

After all, for these theater kids, the real show’s just getting started. —CONTRIBUTED

“Saltik” ends today at 6:30 p.m. at PCC Center Studio, Far Eastern University-Manila; Tel. 09279945421. The next thesis play under Dulaang Laboratoryo will be “Alembong,” a Filipino translation of August Strindberg’s “Miss Julie.” It will run May 18-19 at Teatro Hermogenes Ylagan, Pavilion 3, University of the Philippines-Diliman; Lyka at tel. 09655504603.