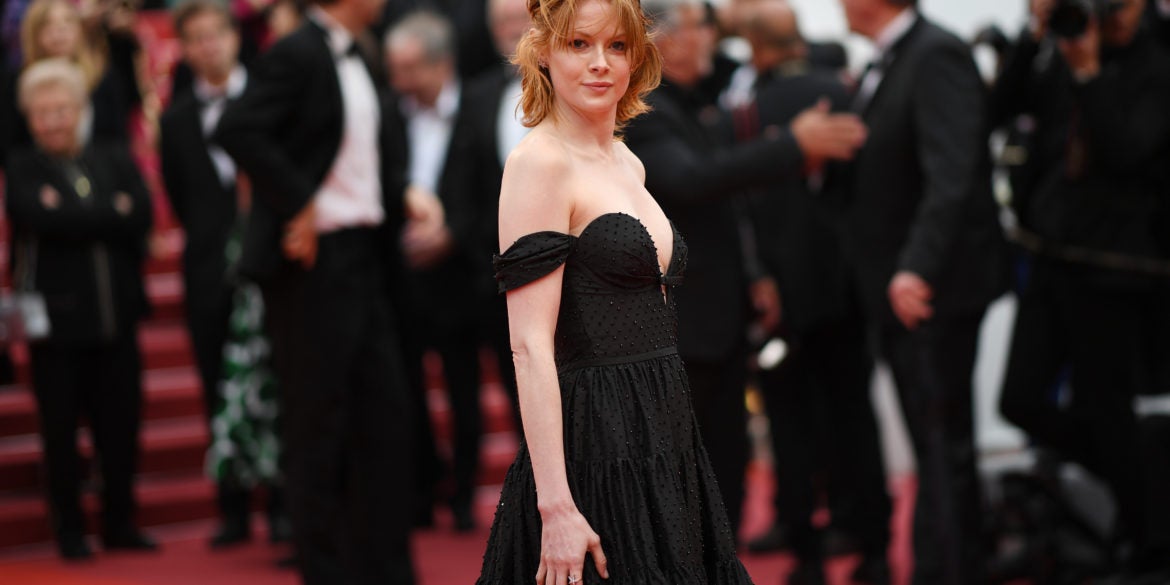 British actress Emily Beecham leaves after attending the screening of the film "Little Joe" at the 72nd edition of the Cannes Film Festival in Cannes, southern France, on May 17, 2019. (Photo by LOIC VENANCE / AFP)

By: Deborah Cole via Agence France-Presse

Jessica Hausner, one of four female directors vying for the Cannes top prize, remembers watching “crazy women” in movies by the great Hollywood masters and sensing something was off.

“I mean ‘Vertigo’ — it was clear he was the one who was crazy,” she said of Hitchcock’s film noir classic in which a traumatised policeman (James Stewart) tracks a “hysterical” woman (Kim Novak).

For Hausner’s feminist sci-fi thriller “Little Joe,” which is premiering at the world’s top film festival, she said she wanted to explore how “crazy” becomes a label used to keep women down.

“I was always fascinated by the films about crazy women. I felt that male perspective and I thought ‘Yeah, but what’s so crazy about them?'” she said.

“The ‘craziness’ of women is actually the very interesting point about them because I think it’s also about being sensitive and intelligent.”

“Little Joe,” the Austrian director’s first English-language feature, tells the story of Alice (British actress Emily Beecham), a senior botanist in a biotech firm in the UK of the near future.

She leads a team of plant breeders developing genetically manipulated strains of flowers that can make their owners eternally happy if they sniff the pollen.

A single mother, Alice names the blossom “Little Joe” after her young son, whom she worries she is neglecting while she pursues her career.

The top-secret project begins to derail when Alice’s male colleagues and her son become addicted to the scent and allow their love for Little Joe to supplant all their human relationships.

Anyone who comes between them and their blossoms soon becomes seen as a threat.

A veteran of the lab (Kerry Fox) is the first to raise the alarm to the dangers of the flowers but is dismissed as batty by her co-workers and, at least at first, Alice.

Hausner said Alice’s “Dr Frankenstein” character, who loses control of her own creation, served as a good metaphor for motherhood and its occasional ambivalence.

“The main character of my film is a woman torn between her responsibility for her work and for the plants she created but on the other hand there is her son that she takes care of,” she said.

“It’s not a social drama or a psychological drama — I think the film’s more a fairytale-like story. In a fairytale the main character has to overcome all these problems. But unlike a fairytale, in the end (of the film) nothing is more clear than it was in the beginning.”

Beecham told AFP she and Hausner had looked to women researchers like French microbiologist Emmanuelle Charpentier, who helped develop the gene-editing process CRISPR/Cas-9, and primatologist Jane Goodall for inspiration.

The English actress said Goodall in particular said how her relationship with her family had interfered with her research.

“She kind of had to put that on the back burner and put the chimpanzees in the forefront,” said Beecham, best known for her part in Joel and Ethan Coen’s “Hail Caesar.”

Hausner, who has developed a cult following for dramas including “Lovely Rita” and “Lourdes,” welcomed a debate about movie industry sexism raging at Cannes.

“Before that, it was obvious too but no one said anything. It was just the way it was. Male directors dominated the festival and not only this festival but all the festivals,” she said.

She said that she knew the deck was stacked against women when she was 16 and her parents gave her a book about great people in history.

“I opened the index and there was one woman and it was (the scientist) Marie Curie,” she said.

“And I thought ‘Maybe it’s only for men’ but on the other hand I knew exactly that this is not true — a woman can do great things as well. So I waited, I thought,  ‘This will change.’ But it didn’t change for such a long time. Now I’m 46 so it’s 30 years later and I’m still waiting.”