How to build a healing home | Lifestyle.INQ ❮ ❯ 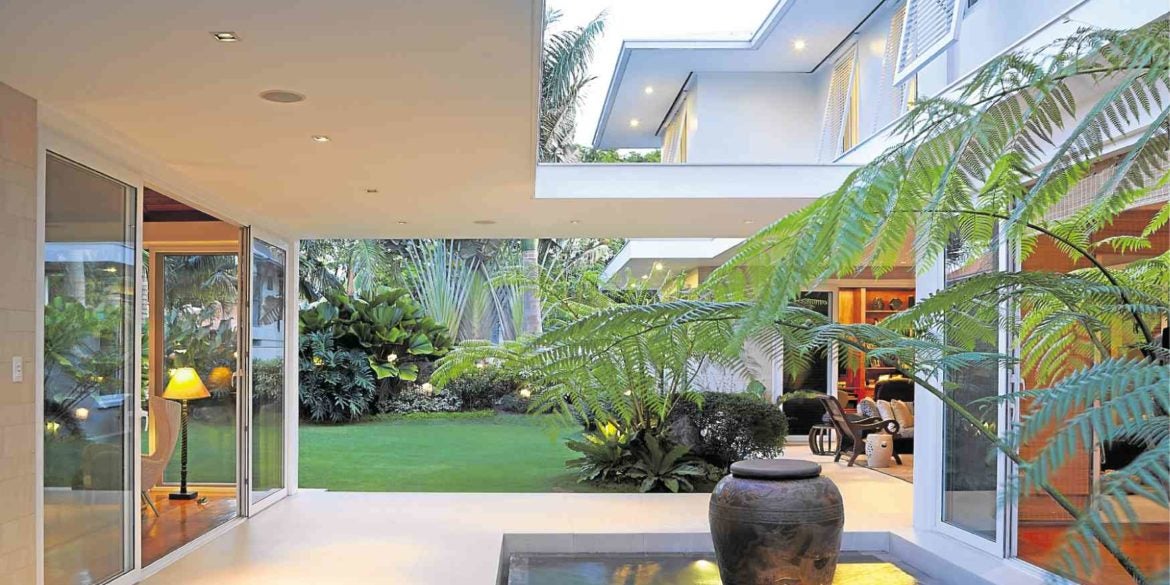 Miñana creates an experience that begins the moment one enters the house, with this serene pond and light casting a dramatic reflection in the pool.

How to build a healing home

Architect Emmanuel Miñana’s residential projects have lately taken on the character of the numinous and the therapeutic.

Miñana told Inquirer Lifestyle that in the past eight years, he has been reading up on best-selling authors such as Caroline Myss, who has written about human consciousness, medical intuition and energy medicine; Marian Williamson, Oprah Winfrey’s spiritual adviser; and alternative medicine proponent Deepak Chopra, who has espoused that the soul, body, and the environment are inextricably linked.

Miñana studied the chakras, the seven energy centers—centers of spiritual energy in a body, according to Indian philosophy—along the spine that govern the various organs and the phases of one’s life.

“In the process, I’ve come to explore the similarities between the body and the home—which is merely an extension of the body,” Minana said.

On May 25, he will share his insights in a talk, on “Designing Healing Homes,” at the Y Museum. He will explain that creating a healing home cannot be measured by building standards or rating systems.

“While building rating systems measure the quality of air and water and the extent of noise pollution, I’m focusing on our human environment and our bodies—they are an ecology in itself and should be cared for,” he said.

For Miñana, a house isn’t just an amalgam of wood, stone and metal, or a showcase of the finest materials and furniture.

“We envelope ourselves in layers of energy,” he explained. “Our home provides comfort, protection, love and substance. But there can be blockages such as awkward layouts, exposure to molds, rust and calcification, hot air build-up, and noise and air pollution. These blockages can store up the emotional energy in a home.”

Miñana said he is guided by Einstein’s premise that matter, in this case, the home, is the flip-side of energy. His talk aims to provide strategies in producing a healing home.

Miñana urged people to “go beyond the material manifestations, such as feng shui and the placement of the furniture and orientation toward certain directions, or putting a pot of flowers beside a bowl of water, or playing meditation music, or buying sustainable furniture.”

He compared the alignment of the seven chakras along the body with the series of spaces connecting the house. The fence, which is the border for security and the inhabitants’ projection of themselves to the world, is related to the first chakra—located at the base of the spine, which governs survival.

From the entrance, one goes through the collective spaces of the living and dining rooms and kitchen, which correspond to the chakras governing the genitalia, solar plexus, heart and throat.

The bedrooms, which are related to the sixth and seven chakras of wisdom and connection with God, are spaces for dreams and growth potential.

“As an architect, I try to understand the energies around the house and the role they play and how family dynamics can block the energy flow,” Miñana said.

Clutter is an example of mindless energy. Suppressed anger, for instance, is manifested in garbage that hasn’t been thrown out.

Miñana’s talk will include elements that stir positive emotions in a house. Having grown up in an apartment with artificial light, Miñana now values the importance of natural light.

Hence, his projects are built with openings and windows that play up sunlight. Even using the whole spectrum of artificial light can create moods.

In Miñana’s projects, the house and garden are like man and wife. The architect not only makes the house blend with the site, but also ensures the house bring the inhabitants closer to nature. The landscape becomes the center of attention from the inside.

“I place the water features and gardens in strategic places to reinforce the smooth flow of the house,” he said. “It’s done by intuition. The garden is not a subset of a home, but an active partner. It balances the energy that comes to the home.”

The movement through space, the layout of the rooms, passages and openings should emotionally engage people. They are organized to draw one’s focus to garden views or beautiful corners.

Miñana will also discuss how compact condos can be healing places. He will give his observations of 10-sqm homes in Japan that have a restrained atmosphere, and which exploit the sunlight.

Ultimately, the architect hopes people will look at a house with a deeper perspective. “It’s less about colors, scents, water, mirrors and feng shui,” he said. “It’s all about the knowledge of energies of the self, and how they play with other members in the home. How can you contribute to make family life more healing?”