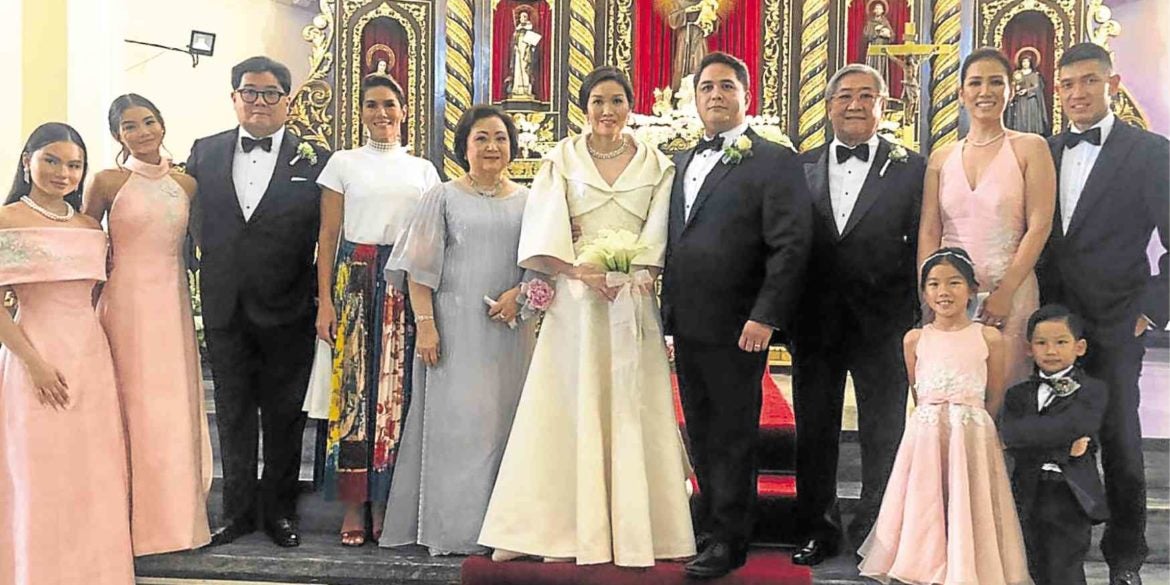 This week is all about LOVE! Exactly a month before my silver wedding anniversary with my hubby Dennis, all the meticulous preparations for our African safari-inspired celebration are being finalized to make sure everyone has a blast.

Thanks to our travel mates Norman and Mye Cruz of Adworks Graphics, our spectacular invitations are being artistically executed with so much love and attention to detail. We are also praying for fine weather on June 24, with a donation to Sta. Clara. This donation also comes with eggs as part of their tradition.

Last weekend, after hosting a beach bridal shower for our Girls Run for Breakfast running mate Raeanna Cranbourne, I headed straight to a wedding and afterward, a 25th wedding anniversary. Attending one event after another, I realized I am so far from completing the many elements of our own anniversary party, so I need to do double-time on preparations.

But let me talk about the beautiful wedding ceremony of Dr. David Endriga and Cat Tantoco Huang. Their Filipiniana wedding had so many romantic elements, like blooms of white roses and flowers done by Rustan’s Flower Shop, and live opera music. Red Charity Gala designer Jojie Lloren did the wedding gown of Cat and the entourage gowns. Rustan’s longtime in-house label designer Criselda Lontok made the elegant ninang gowns.

The groom is an orthopedic doctor, and he also played the piano and dedicated a song to his new bride. David’s parents, Bal and Tessie Endriga, are good friends of Cat’s mom Nedy Tantoco, and it was during one New Year’s Day party of Tita Nedy that the couple met.

From that wedding, I headed to the silver wedding anniversary party of Philip and Small Laude. After their roof deck renewal of vows ceremony, perfectly timed with the sunset, the formal dinner was held in their dinner hall, beautifully transformed into a magical garden by top wedding stylist Gideon Hermosa.

Philip and Small dated for seven years before they married. Small told us that among all the gifts of Philip, ranging from Chips Ahoy, Pringles and Red Ribbon to a Rolex watch and a car, it was his love, patience and kindness that won her over.

And she shared that he is not funny and doesn’t laugh at her jokes. Bubbly Small is very entertaining, so Philip is really quite in love with her, since they started going out when they were still in college.

So many friends and family joined the party that ended in the wee hours of the morning. The beautiful cake of chef Castillo Fuentes was beautifully displayed in the main living room. I posed with Singapore IG celebrity and entrepreneur Jamie Chua next to the cake as we exchanged stories about South Africa, where she recently visited and stayed at Singita Lebombo Lodge, the same camp Dennis and I went to last year.

Philip’s family is of Chinese ancestry, and although Small is not, she said she acts Chinese now. The Laudes embraced her being Filipina because she is so endearing and caring. The couple built their businesses from the start, and it is amazing what they have built over two-and-a-half decades.

If there is a story about love that is unconditional and forgiving, the best example is the one of Dr. Vicki Belo and her hubby Dr. Hayden Kho Jr. I am so delighted that they granted my wish for them to be our ninang and ninong at our own anniversary.

Dr. Vicki wanted to surprise Hayden with a birthday party but she hasn’t been successful in pulling off one in the past. So, for this year’s milestone, she pulled out all the stops to come up with a birthday surprise at Swatch + Swatch Building, and added an exhibit of Hayden’s favorite photos. Through his friends architect Marc Go and Hannah Morales, 20 photos were curated from Hayden’s collection—half featuring his family and half from his real-life photography.

Hayden has been an avid photography enthusiast for some years now, and had never showed his work publicly until that night. His hobby started with the birth of his daughter Scarlet. As he grows as a father, Hayden also grows as a photographer, focusing on life, fatherhood and devotion.

Hayden’s exhibit was titled “A New Frame,” and as a surprise, it will be displayed in SM malls soon, thanks to Steven Tan of SM.

I am also so thankful to Steven for loaning me their SM Aura Mall Christmas décor that had Africa as its holiday theme.

Artworks by Arthur Tselishchev were presented at the Linea Collection launch at the Bernhardt pop-up showroom at Power Plant Mall.

Eric Po, managing partner of Home Mavericks, talked about the new collection that marries art and nature. He expressed gratitude for the loyalty and patronage that Bernhardt Philippines has been receiving from their valued clients, as well as the immense support coming from RCBC chairperson Helen Yuchengco-Dee, Sen. Juan Miguel and Audrey Zubiri, and Rockwell CEO Nestor Padilla, who were all present at the event.

Together with the Bernhardt items, beautiful plants by PGDbotanique embellished the space. With Black Forest Marble and Cerused Greige finishes and elegant furniture design, the beauty of the Linea Entertainment Console was unveiled.

The launch of this collection creates more visibility for everyday pieces that were created for a meaningful advocacy. Check it out at the Bernhardt showroom at 59 Connecticut St., Greenhills, San Juan City or at their pop-up booth at the Power Plant Mall, and enjoy a 25 percent discount until June 30. Follow @bernhardtph on Instagram and join their social media contest.