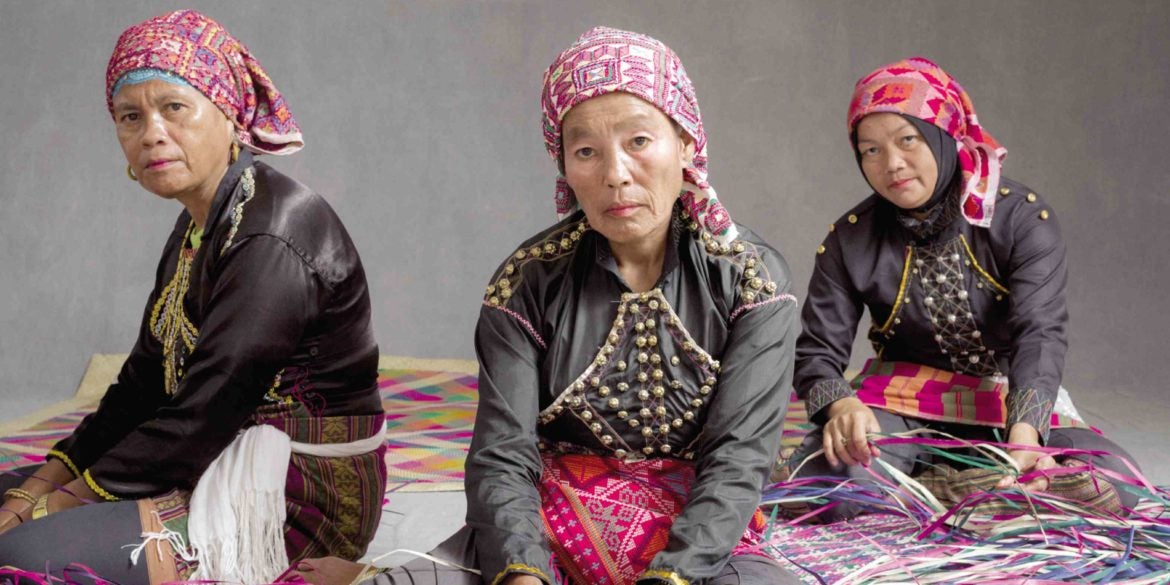 Yakan women of Basilan have been weaving mats through the entire half-century of turmoil in their homeland.

One of a few culturally specific showrooms in the country, the Bangsamoro Museum in Cotabato City not only narrates the history of and lifestyle in the former Autonomous Region of Muslim Mindanao (ARMM), it also expresses the broader theme of significant human experience.

An initiative of the last ARMM governor, Mujiv Hataman, the Bangsamoro Museum is an old repository that has been renovated to make it more relevant to the community.

“Our modest ambition is to affirm the experience of Muslim Filipinos at besting the odds—to hold a mirror to the Maranao, Maguindanao, Yakan, Tausug, Sama and other Islamicized peoples,” says museologist and scholar Marian Pastor Roces, whom Hataman commissioned to curate the new space.

At the start of the upgrade last year, she was delighted to find in good condition the 21 Kulaman Plateau limestone burial jars two decades after her first visit.

Highly valued in the antiquities market, the rare jars had been dug out in the late 1960s by archaeologists in the uplands of Sultan Kudarat, a part of Cotabato at the time. The jars had been carbon-dated and determined to be about 2,000 years old. Unfortunately, because of the secessionist conflict that erupted in the early ’70s, no further research could be done.

Roces points out that the Kulaman Plateau artifacts are definitely part of a grander scenario—the survival of objects of impressive beauty despite the vicissitudes of war.

“I informed the governor of this collection’s great value,” says Roces. “He asked his staff to consult with Orlando Abiñon, the Philippines’ leading conservator, and Dr. Samuel Briones, who participated in the 1960 excavations. The consultation happily led to another, this time between the elders in museology and younger museum staff led by anthropologist Glenn Francis Lanticse. From one original insight, the themes of survival and inspiration emerged.”

Thus, the museum underwent radical curatorial retooling, the curator notes, “to arrive at this historic moment.”

Roces believes that the political transition from ARMM to Bangsamoro is as significant as the peace forged after the ethno-nationalist wars in Northern Ireland in the late 20th century,
and the end of the Sri Lankan Civil War when government forces quelled the Tamil Tigers’ rebellion.

“My bias is to look at the cultural dimensions of any political process,” she says. “With Bangsamoro, the bigger story for me is how the Muslims of the Philippines pulled so much strength out of their souls.”

The museum is decorated with furniture that accentuates upholstery work by the Sinagtala weavers, women refugees from Ground Zero Marawi. With no background in weaving whatsoever, the women began producing textiles for livelihood after an intensive workshop. They later told Roces that weaving drew their attention away from the constant bombings.

Part of the curatorial plan was to feature a boat, the awang, from Liguasan Marsh, 220,000 ha of wetlands that run through Cotabato, Maguindanao and North Cotabato. It has known to be not only a fertile ground for crops and oil but also a tough terrain for military operations against various Moro groups.

“The awang was a big factor in MILF’s longevity. It was their means of navigating the marsh. But more than a vessel, it is an old cultural form,” Roces says. “It symbolizes the complexity of opposing forces in that environment. There is no way to disentangle the political, economic, cultural and military dimensions of either conflict or peace-building.”

Contemporary history is manifest in facsimiles of the Bangsamoro Organic Law (BOL) and Bangsamoro Basic Law (the draft document), which are displayed as large-scale transparencies in a towering light box.

The museum walls also feature a 1,000-year timeline that predates the arrival of Islam in Mindanao, plus another 100-year detailed historical timeline aimed at commemorating the Bangsamoro’s multifaceted and complicated journey.

Since oral tradition was another source of strength for the region during the war, recorded chants continuously play in the background during museum hours.

“Muslim groups in the Philippines kept Austronesian chanting traditions that addressed harrowing experiences,” Roces says. “The Tausug kissa, for example was chanted extemporaneously throughout the Bud Dajo Massacre of 1906, the Zamboanga Siege (in 2013) and the Japanese occupation. The Sama Dilaut deleng (a song form that likewise describes experiences in real time) according to Dr. Norma Gonzales, a Sama linguist, told of the departure of Sama men recruited by the MNLF from Tawi-Tawi.”

Clothing as cultural expression is another essential part of the exhibit, which certain viewers may find distinctive for its collection of beautiful photographs of the Yakan, Maguindanao, Maranao, Tausug, Iranon and Sama-speaking peoples.

The photographs are not merely to show the clothes, Roces says. “The Muslims are represented outside of the mainstream notions of beauty. The photographs aim to (adjust) such notions. As a curator, I’m showing dignity.”

There is a kulintang, especially made for the museum, which acknowledges the few families that make bossed (knobbed at the center) gongs. In Simuay, Sultan Kudarat, Roces says, a kulintang is made of melted spent bullets, brass padlocks, and old faucets.

The museum presents vestiges of the Marawi Siege, including a burnt Holy Quran from the ruins of a mosque, and panolong details, elaborately carved flanges salvaged from Ground Zero. These beams, recognized status symbols, are juxtaposed with photographs of the devastated city center.

All these objects, documents and images meticulously gathered for the museum, Roces and Alawi believe, are the most effective means for the public to appreciate the intricacies of how Bangsamoro attained political status and formed a government whose declared goal is to fulfill the aspirations of all Muslim Filipinos and indigenous groups in the region.

Roces states a caveat: “I am not talking about illusory hope that things will immediately get better. Work has just begun, and we may, in fact, face new challenges in the future. Still, the creation of Bangsamoro… must be celebrated.”—CONTRIBUTED