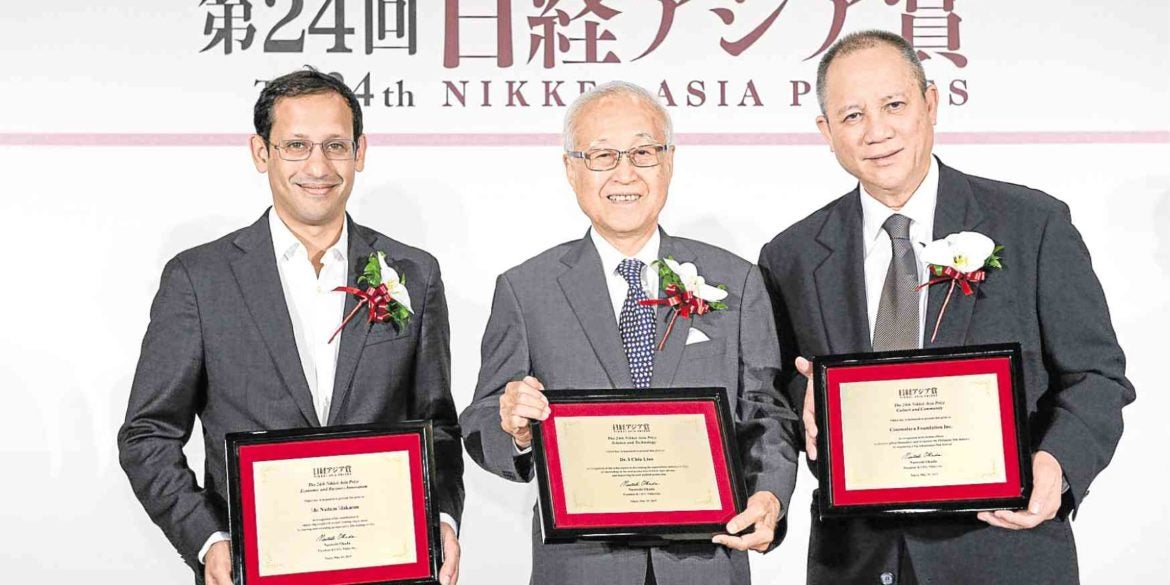 Antonio O. Cojuangco (right) with Nadiem Makarim of Indonesia and I Chiu Liao of Taiwan during the 24thNikkei Asia Prizes in Tokyo onMay 29 —PHOTO COURTESY OF NIKKEI ASIAN REVIEW

‘We offer Cinemalaya as alternative space for truth-telling’—‘Tonyboy’ Cojuangco

Businessman and arts and culture patron Antonio O. Cojuangco received the Nikkei Asia Prize for Culture and Community on behalf of the Cinemalaya Foundation for helping revive the Philippine film industry on May 29 in Tokyo.

The Nikkei Asia Prizes are given to individuals and groups in Asia that have made significant contributions to the region’s development. This year is the 24th edition of the awards.

Aside from Cojuangco and Cinemalaya, the Nikkei Asia Prizes were given to Indonesian businessman Nadiem Makarim, founder and chief executive of ride-hailing service Go-Jek (business and innovation); and Taiwanese professor I Chiu Liao from the National Taiwan Ocean University for his pioneering work in prawn farming  (science and technology).

Cinemalaya Foundation in the Philippines is a nonprofit film organization established in 2005 by Cojuangco, actor and film director Laurice Guillen, and then Cultural Center of the Philippines artistic director Nestor Jardin. On the same year, the foundation organized the Cinemalaya Philippine Independent Film Festival.

According to the Nikkei citation, “the name Cinemalaya is a portmanteau of Filipino words reflecting the founders’ belief that cinema, ‘cine,’ could enliven consciousness, ‘malay,’ by telling stories in a free and independent manner, ‘malaya.’”

“The organization has striven to shed a new light on the country’s film industry, which had been viewed as dead following a huge decline in production,” the citation added.

“In this age of fake news and the weaponizing of social media, we offer our festival as an alternative space for truth telling,” he added.

The Nikkei Asia Prizes were created in 1996 to commemorate the 120th anniversary of Nikkei’s Japanese newspaper. Past winners include Manmohan Singh, who won in 1997 before becoming India’s prime minister, and Bangladeshi Muhammad Yunus, awarded in 2004, who went on to receive the 2006 Nobel Peace Prize for his work on reducing poverty and pioneering microfinance.

Meanwhile the list of full-length movies in the main competition of the 2019 Cinemalaya festival has been announced.

Alonso’s “Belle Douleur (Beautiful Pain)” is a May-

December romance while Lim’s “Tabon” is a thriller.

Actress and filmmaker Laurice Guillen, president of the Cinemalaya Foundation, is head of the festival organizing committee, while veteran filmmaker Mel Chionglo is Cinemalaya monitoring head.

The 2019 Cinemalaya Philippine Independent Film Festival will be on Aug 2-11, at  the Cultural Center of the Philippines.