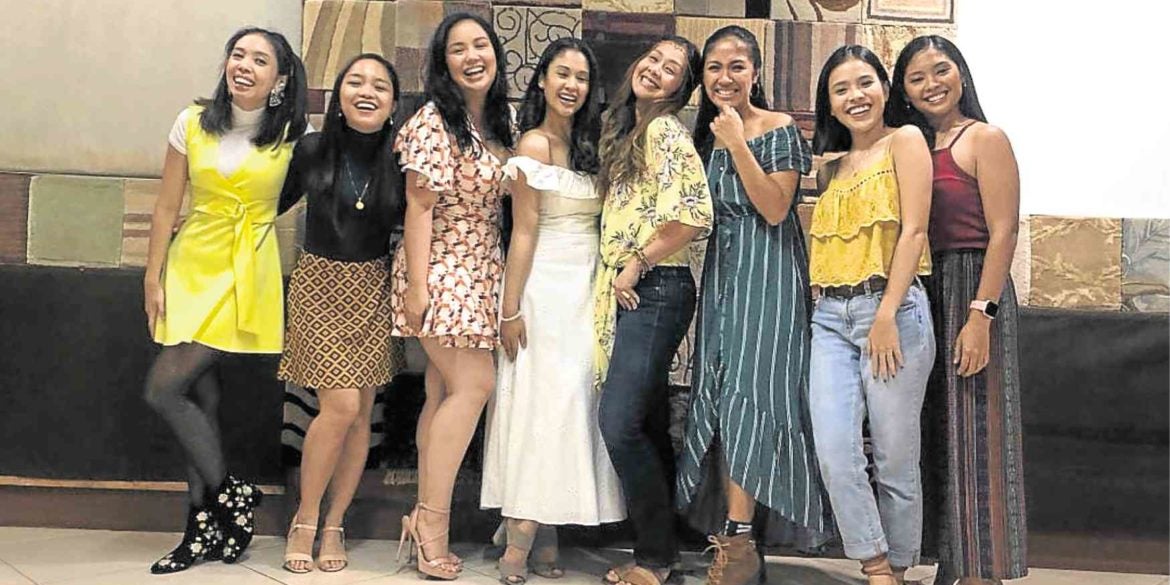 Carole King musical: A ‘Beautiful’ celebration of the empowered woman

Only two shows from the 2013-2014 season are still running on Broadway: Disney’s “Aladdin,” and the jukebox musical “Beautiful,” which uses the songs of Carole King to dramatize her early career, up to the recording of her global bestseller “Tapestry.” By next week, Atlantis Theatrical Entertainment Group will have premiered both musicals in the Philippines.

“Beautiful” reunites director Bobby Garcia with Kayla Rivera, who played Princess Jasmine when Atlantis staged the first non-American production of “Aladdin” in 2012 (preceding the show’s Broadway bow by more than a year).

Ahead of “Beautiful’s” June 14 opening, we talked with Rivera and the other eight women in the cast about King’s influence in their artistic lives and what it means—and takes—to be a woman today. (The roles the women are playing are indicated in parentheses.)

Here are edited excerpts from our e-mail exchanges:

Mikkie Bradshaw-Volante (Cynthia Weil): I grew up listening to Carole King. My parents were big fans of hers: “Tapestry” was on constant rotation on our record player, and my mom and I would even jam to “It’s Too Late” on the family piano.

Jill Peña (Janelle Woods/Shirelle): “It’s Too Late” was a regular in my family’s playlist back when the videoke era was in full swing. I was so obsessed with it, I composed a ringtone on my tita’s Nokia 3210. Then, at my first-ever singing competition in college, I sang “Natural Woman.”

Kayla Rivera (Carole King): At a talent showcase in Calgary, Canada, where I was born and raised, I heard a friend sing “Natural Woman.” Right away, I was hooked. I went home and started listening to Aretha Franklin’s version. From then on, it was the song I’d always be excited to perform, even if I couldn’t relate to the lyrics. My mom would tell me to sing more age-appropriate songs, but I’d insist on singing it.

Maronne Cruz (Betty): King’s songs have a pervasive way of hitting the heart, even when they’ve been passed on and loved by generations of musicians, and reinterpreted in different ways. “Chains” by The Beatles, “Natural Woman” by Franklin, “I Feel the Earth Move” by Mandy Moore. The first two were impossible not to grow up with. The latter, I found in Moore’s “Coverage” album, which is an album full of covers (go figure!).

Teetin Villanueva (Little Eva/Shirelle): Growing up, I would hear [King’s] songs, like “It’s Too Late” and “Natural Woman,” on the radio. I learned “You’ve Got a Friend” for a voice class when I was in grade school, and back then, I didn’t know anything about King. I was pleasantly surprised to discover she cowrote “The Loco-Motion”—I honestly had no idea!

Alex Reyes (ensemble): It was like a light-bulb moment for me when I saw “Beautiful” on Broadway in 2017. I was surprised by how many of King’s songs I’d grown familiar with as a child. “Ah! She wrote that!”

Gabby Padilla (ensemble): [In “Beautiful”], not only are we celebrating King as an artist, but also King as a woman who comes into her own and finds her own voice. We forget how lucky we are to live in a time when women can pursue their dreams without question (well, for the most part).

Bradshaw-Volante: What audiences need to understand is that when King started, the music industry was predominantly run by men.

Villanueva: Back then, women were expected to become teachers or housewives. King broke those stereotypes.

Gab Pangilinan (Marilyn Wald/Shirelle): She paved the way for more female artists [see: The Shirelles!] and served as a representation of an empowered woman.

Bradshaw-Volante: [But] as much as times have changed for the better, there is still immense pressure on women. You’re expected to juggle motherhood, careers, relationships—all while maintaining a tiny waistline. I don’t think a lot of men realize that women wake up and charge into battle every day. This perfect contour and lipstick isn’t just makeup; it’s war paint.

Padilla: Oftentimes, women shrink or compromise themselves to accommodate people or relationships because we think that’s all we deserve. We’re so apologetic for the space we take up.

Bradshaw-Volante: “Beautiful” [celebrates] the bravery and strength required to be a woman, so you need a cast of fierce females who are up to the task.

Peña: I don’t think I’ve cried this many times during a rehearsal period! It’s like daily catharsis; the show just makes its way into your soul, and everyone comes out of it better than when she started.

Cruz: One thing I enjoy about more female-centric narratives is how they expose the different stories that women face and the different facets of femininity. Working on shows with strong female characters and cast mates always feels like my own form of activism.

Rivera: Another female-centric narrative that I was part of was “Side Show” [last year]. But that was different in that the conjoined twins Daisy and Violet Hilton had suppressed voices and were taken advantage of throughout their lives. To see “Beautiful” shed light on a woman being triumphant in a profound way leaves us with a sense of empowerment.

Pangilinan: [“Side Show”] was my first time in an Atlantis production, with Kayla as [Daisy].

Villanueva: This is my sixth Atlantis production as part of the cast, and third as Cecile Martinez’s assistant choreographer, [but] I think it’s the first time that majority of the cast are millennials. I’m used to being at the rehearsal venue one to one-and-a-half hours before call time, and it’s refreshing to see I’m not the only one who is extra early. When we were still in the process of cleaning choreography… I remember seeing Direk Bobby arrive with a surprised look on his face because it looked like rehearsals were already ongoing.

Cruz: Bobby does a lot of bonding games and workshops for the cast in general. He’s constantly verbally uplifting the women… and reminding us of our strengths that we often take for granted.

Carla Guevara-Laforteza (Genie Klein): I’m grateful to Bobby for entrusting me with this role, because this is the first show I’m doing for Atlantis where I barely sing. It’s like doing a straight play. There are a lot of musicals I’ve been part of that had strong women characters at the center—“Miss Saigon,” “Song and Dance,” “Nine”—and it’s not any different from working on a show where the man is the lead. You give the same effort and deliver the same level of performance quality to each show. When I was starting [in theater], there were only three of us in my batch in Repertory Philippines who were being groomed to be future leading ladies (the others were Sheila Valderrama-Martinez and Maya Barredo), so we had the advantage of being personally trained by our mentors Bibot Amador and Baby Barredo. I can’t say it’s easier now [for women in theater], but consistency is key. You are only as good as your last performance. —CONTRIBUTED