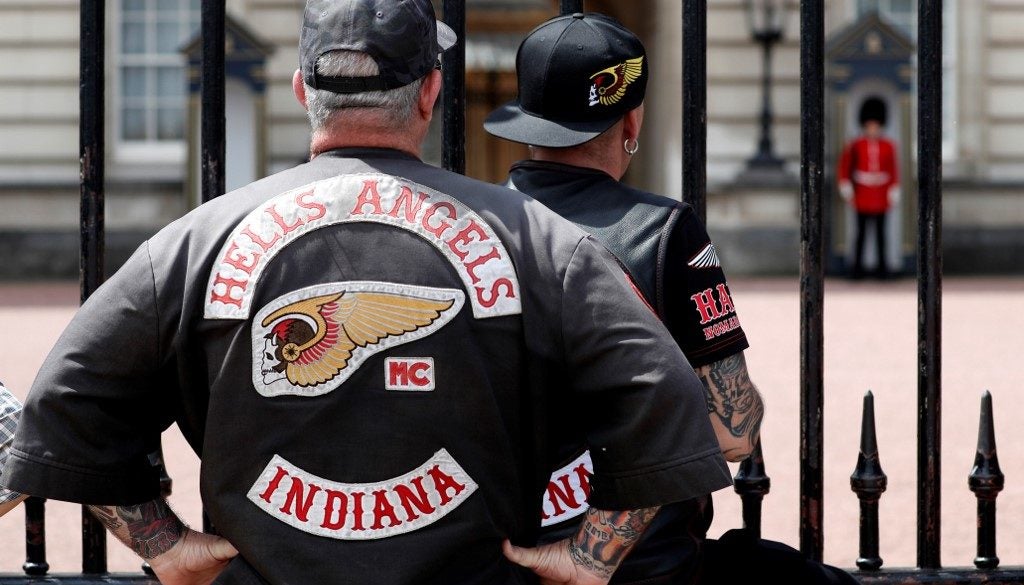 Tourists wearing Hells Angels, Indiana jackets look through the gates of Buckingham Palace, the official residence of Britain's Queen Elizabeth, in central London on June 2, 2019, ahead of a visit to the UK by US President Donald Trump. - Queen Elizabeth II will welcome US President Donald Trump Monday on a state visit to Britain, marked by diplomatic tensions between the old allies and political upheaval in London. (Photo by Adrian DENNIS / AFP)

After Hells Angels, the Dutch ban another biker gang

Dutch judges on Friday banned the homegrown No Surrender biker club in a fresh crackdown just over a week after the famed Hells Angels motorcycle gang was outlawed.

The group “violates public order and is banned and dissolved”, a court in the northern town of Assen said as it granted a request by prosecutors to shut down the gang.

“A large number of members of No Surrender are or have been structurally involved in numerous serious criminal offences,” the court said in its ruling.

The gang, which was formed in the Netherlands in 2013 and has grown rapidly since then, was involved in the trade of weapons and drugs had a “culture of lawlessness”, it added.

“Many bystanders witness a fight or shooting in a residential area or entertainment centre and there are just as many the risk of becoming an unintended victim.”

Another Dutch court banned the Hells Angels, one of the world’s most famous biker gangs, on May 29 as part of an ongoing clampdown on so-called outlaw motorcycle gangs.

No Surrender hit the headlines in 2014 when the Dutch public prosecutor said three members of the gang who had joined Kurds battling the Islamic State group in Iraq were not necessarily committing a crime.

One of them, former soldier Nomad Ron, 46, was killed the following year in a tram accident in Amsterdam.

The Hells Angels, known for the Harley Davidson bikes and leather clothes, were founded in the United States in 1948 and have some 470 chapters in more than 50 countries around the world.

The Netherlands had already banned the Hells Angels’ arch-rivals, the Bandidos, in 2017, for similar reasons.