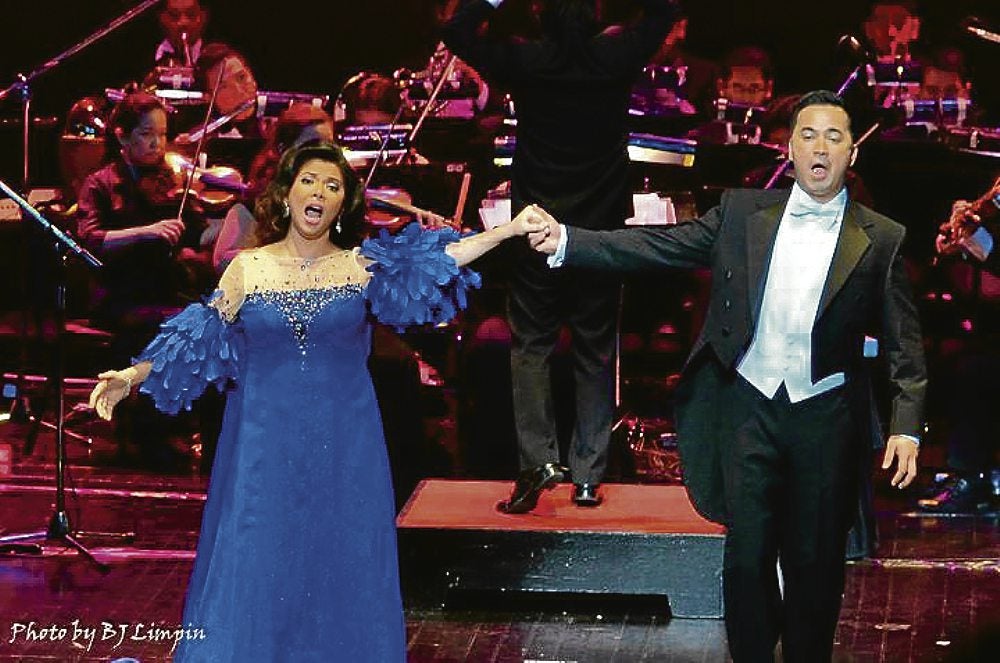 The good news for the opera-starved is that Verdi’s “La Traviata” will be mounted at the Cultural Center of the Philippines  with Filipino lead singers on March 3.

The production is going to be a co-production with a Korean company.

Rachelle Gerodias will debut as Violetta; and Arthur Espiritu, the first Filipino tenor to sing at La Scala di Milan, will also debut as Alfredo. The two sang excerpts from “Traviata” in their Oct. 8 CCP engagement last year.

Filipino Violettas are few, and so are the Filipino Alfredos.

Maestra Mercedes Matias Santiago sang it at the Manila Metropolitan Theater in the 1940s as a last-minute substitute to an indisposed Filipino soprano who lost her voice from crying over her mother who had just passed away.

I think Fides Cuyugan Asensio sang it in full, or probably some excerpts, but I have no record of this. Someone told me she sang “Addio del Pasato” (from “Traviata”) in the indie film “Niño” and did pretty well.

Another “Traviata” was seen at the CCP in the ’70s with Remedios Bosch Jimenez in the title role. The opera returned at the CCP in the early ’90s with the Violetta of American soprano Donna Maria Zapola in a controversial CCP production  directed by National Artist for Theater Rolando Tinio. Her Alfredo was no other than Filipino tenor Nolyn Cabahug.

Italian diva Taziana Fabriccini sang one performance of “Traviata” at the Manila Metropolitan Theater  in the mid-’90s but lack of funds hounded the production.

One of the greatest Violettas of  this generation—Romanian diva Nelly Miricioiu—sang at the CCP in 1980 and returned in 1984 to great acclaim at the Manila Metropolitan Theater. Both American and European critics compared her to the great Maria Callas, and when she guested in a Malacañang soiree in the ’80s, Imelda Marcos said La Miricioiu even sounded better than Callas.

Her Violetta  in the US and Europe was second to none. She was the Violetta of José Carreras in Spain,  Alfredo Kraus in Frankfurt Opera, and Placido Domingo in San Francisco Opera as last-minute substitute of soprano Katia Ricciarelli. She sang 14 performances of “Traviata” in Sydney Opera, and Australian critics were one in saying La Miricioiu had nothing to fear from both Dame Joan Sutherland and Kiri Te Kanawa.

Now   57,  La  Miricioiu has worldwide engagements that continue to baffle and charm  critics.

She debuted at the New York City Opera in Handel’s “Agrippina” three years ago and the New York Times noted: “Nelly Miricioiu, a Romanian soprano making her house debut, sang the title role with an appealingly dark tone and imperious manner.”

In between engagements, she had televised master classes in Guildhall School of Music in  London, and was also in Athens  as   member of the jury  of the Maria Callas Grand Prix,  of which she was a previous grand prize winner.

As Lady Macbeth in a concert version in London, Clare Colvin of the London Sunday Express wrote of her: “In the dominant role of Lady Macbeth, Romanian soprano Nelly Miricioiu was not going to allow a concert performance to impede some full-blooded acting as she wandered through the violins in sequined chiffon, reading Macbeth’s letter.  Verdi envisaged the role as requiring a singing actress of extraordinary character, and Miricioiu, a prima donna to her fingertips, fits the bill. ”

The most acclaimed Filipino Alfredo abroad was no other than Otoniel Gonzaga although several tenors tried the part, namely Noel Velasco, Frankie Aseniero, Nolyn Cabahug.

As I recall the great Violettas and Alfredos of our time, I certainly will look forward to the Violetta of  Gerodias, the Alfredo of Espiritu, and Germont of Andrew Fernando on March 3 at the CCP Main Theater.

The announcement of the Cecile Licad-Lea Salonga-Lisa Macuja Elizalde one-night-only concert on March 17  in this paper caused a  virtual tsunami of early ticket buyers at the TicketWorld (tel. 8919999).

I guess a concert featuring the superstars of classical music and dance with the country’s  only reigning Broadway  star is a tough act to follow.

The chamber music treat not to be missed on Feb. 25 is the team up of cellist Wilfredo Pasamba, violinist Gina Medina and pianist  Mary Anne Espina at Philamlife Theater. Program includes Arensky’s  Piano Trio No. 1 and Chausson’s Concerto For  Piano, Violin and String Quartet.