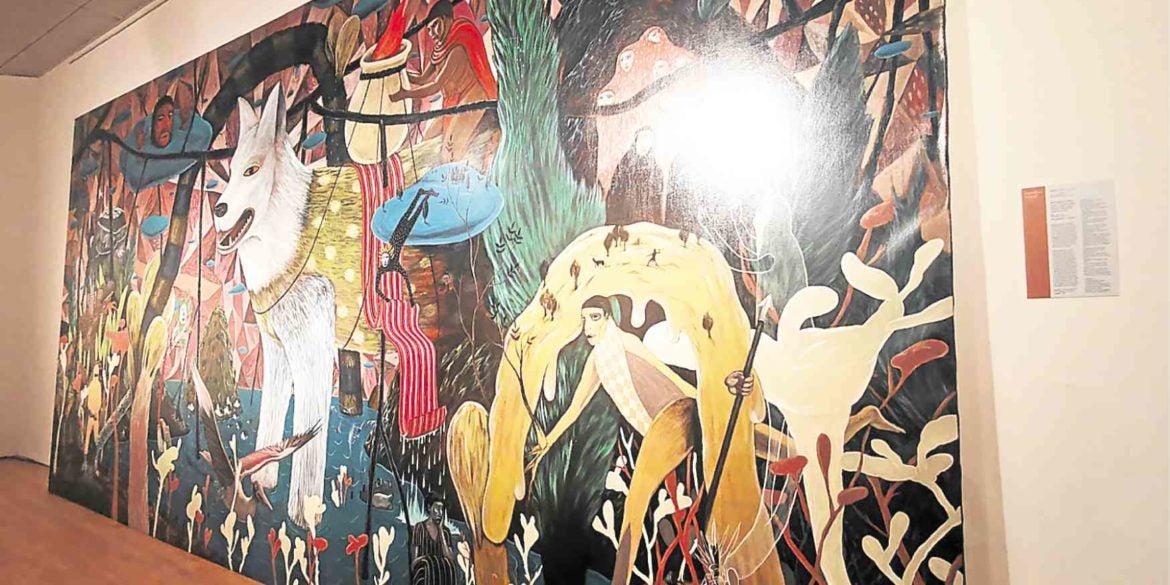 Rodel Tapaya’s mural that had won the Signature grand prize from Singapore in 2011 was sold for P19.8 million at Salcedo Auctions’ inaugural “Paradise Found” auction in its newest home at NEX Tower along Ayala Avenue in Makati.

A 305 x 610 cm acrylic-on-canvas, “Baston ni Kanbunian, Bilang Pero di Mabilang” was described at the time as “a compelling and monumental-scale work” by the international jury of the Asia-Pacific Breweries Foundation Signature Art Prize, a prestigious competition for Asia-Pacific artists.

“With its multiple narratives and diverse allegorical references, this stunning mural-sized painting embodies a vibrant strain in contemporary art from the Asia-Pacific region,” the jury said. “The artist is audacious in his use of the Philippine mural tradition as well as Latin American magic realism and Bosch-like phantasmagoria.”

Salcedo Auctions director Richie Lerma said that the new home at NEX Tower met the auction house’s requirements as it was preparing to celebrate its 10th anniversary next year.

“We have been looking for a space for more than a year that meets all our requirements,” he said. “With our ‘Paradise Found’ auction, it is really quite symbolic not just in terms of building our own personal paradise, but in creating a new art paradise in the middle of the city for our clients, friends, and like-minded people who want to enjoy art in a relaxed and secure atmosphere.”

The new location is hosting the exhibit, “Roberto Chabet: Early Works & Ephemera,” a private collection of drawings, sketchbooks, studies left behind from the artist’s stay in New York. The selection provides a unique opportunity to survey the foundation of Chabet’s highly complex body of work.

“Because of the bigger space, we can do more things and we have a lot of exciting ideas as we approach our 10th year,” Karen Lerma said. “When we started Salcedo Auctions, it was a completely new idea here in the Philippines and through the years we can see that it’s good and now the scene is very active and so it’s very apt that we are moving to our next stage.” —CONTRIBUTED