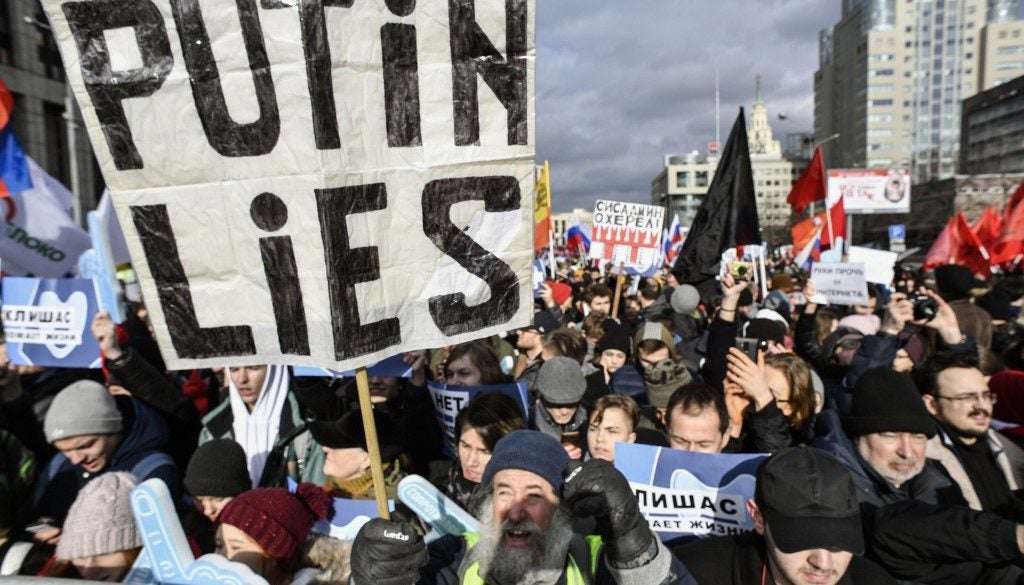 A protester holds a placard reading "Putin lies" during an opposition rally in central Moscow, on March 10, 2019, to demand internet freedom in Russia. - Thousands of people rallied against Russia's increasingly restrictive internet policies which some say will eventually lead to "total censorship" and isolate the country from the world. The mass rally in Moscow and smaller events in other cities across the country was called after the Russian lower house of parliament backed a bill to stop Russian internet traffic from being routed on foreign servers, in a bit to boost cybersecurity. (Photo by Alexander NEMENOV / AFP)

In the early days of Russia’s internet, hippies founded the first telecoms venture with Americans, an astrophysicist ran the country’s most visited website and providers punished hackers by kneecapping them with baseball bats.

The heady time, which coincided with the 1991 break up of the Soviet Union, is the subject of a new documentary that looks back at a very different era as the Kremlin clamps down on internet freedom in present-day Russia.

Setting the tone, footage from 1990 shows American Joel Shatz and his Soviet partner Joseph Goldin — the duo behind the first Soviet-American telecoms venture — driving a ballistic missile transporter carrying clowns to Red Square after convincing the traffic police that the performance had been approved “by the highest authorities”.

Andrei Loshak, a former television reporter, tracks the main personalities behind the Russia-based internet, known as Runet, for the documentary  “Holy War. The history of Runet,” to be screened Sunday at Moscow’s Beat Film Festival.

His travels take him back and forth across the Atlantic to film the current lives of early internet savants, website editors and trolls, who are now Silicon Valley entrepreneurs, cannabis investors and pro-Kremlin politicians.

“The internet was the place where everything developed as it can develop when the government does not intervene,” he says.

In one clip, Russian President Vladimir Putin is shown meeting internet entrepreneurs in 1999 and telling them that the Internet is a “promising initiative” that he would not touch.

“And in fact, he did not touch the internet for 15 years,” Loshak says, adding: “Thanks for that, curiously.”

However, a raft of new laws clamping down on internet use were passed following mass anti-government demonstrations in 2011-12 and Moscow’s rift with the West after its annexation of Crimea in 2014.

New restrictions of online content are proposed weekly, while internet companies are now required to store personal data in Russia and comply with security services.

Many websites and services deemed dangerous for law and order are blocked, from professional social network LinkedIn to the Telegram messaging app — though the blocks are easily circumvented for the moment.

In March, Putin signed laws making it a crime to publish “fake news” or show “disrespect towards authorities” on social media.

In May he signed a law on “digital sovereignty” that will provide the Kremlin with the ability to cut off Russia, or a particular Russian region, from the global internet.

Current Time, the producers of the documentary, say it is particularly pertinent for younger audiences who did not witness the early days of the internet in Russia first-hand.

The “insane laws” will continue, since the government views the internet as a threat, Loshak says.

“It’s a battle, and it’s not very clear who will come out on top.”

The restrictions have already taken a toll.

“There are fewer large internet media outlets in Russia now, they have lost their influence,” Loshak says.

“And new companies stopped appearing. There have been practically no IPOs” since the Russian internet leader Yandex went public in 2011.

But Loshak believes it’s too late for Russia to impose a rigid Chinese-style system of censorship because the internet was born in an atmosphere of freedom and that cannot be easily undone.

“In China, they didn’t have the 90s like in Russia, when everything was swept away and we had real freedom,” he says.