Eleven couples each treated to a $450,000 deluxe wedding in Lisbon | Lifestyle.INQ ❮ ❯ 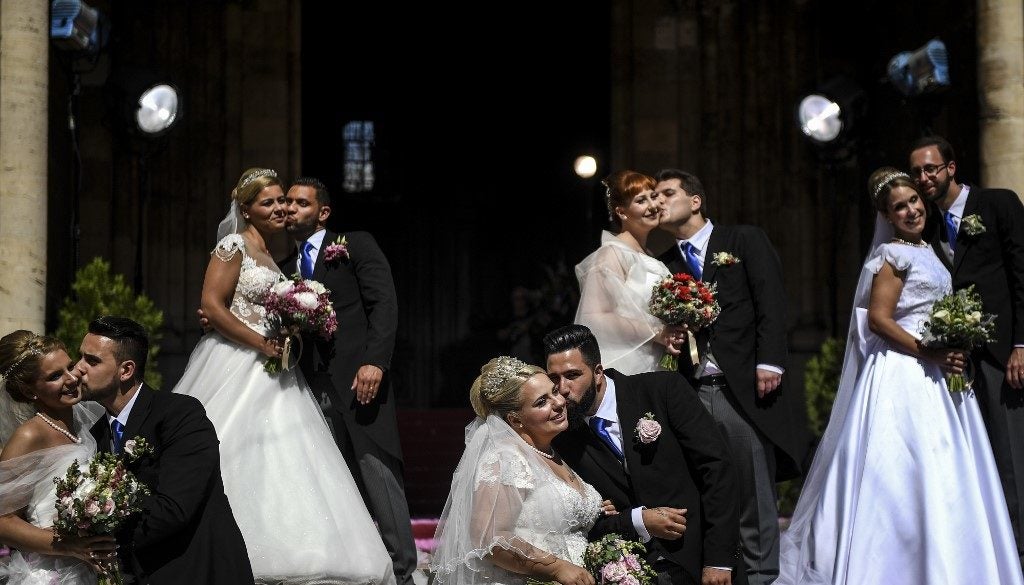 Brides and grooms kiss as they pose for a photo outside the Lisbon's Cathedral following their wedding ceremony in Lisbon on June 12, 2019. - It is Lisbon's wedding of the year. Crowds gather at the cathedral, hoping to catch a glimpse of the newlyweds as cameras lie in wait. Then not one, but 11 couples walk out, fresh from tying the knot today in an all-expenses-paid ceremony, the beneficiaries of a decades-long annual tradition that fetes the Portuguese capital's beloved patron Saint Anthony, matchmaker extraordinaire. (Photo by PATRICIA DE MELO MOREIRA / AFP) / TO GO WITH AFP STORY "Lisbon fetes 'saint of love' with free deluxe weddings" by THOMAS CABRAL & MARIANNE BARRIAUX

Eleven couples each treated to a $450,000 deluxe wedding in Lisbon

It is Lisbon’s wedding of the year. Crowds gather at the cathedral, hoping to catch a glimpse of the newlyweds as cameras lie in wait.

Suddenly, the organ music grows louder and photographers get into position in front of the imposing entrance.

Then not one, but 11 couples walk out, fresh from tying the knot Wednesday in an all-expenses-paid ceremony, the beneficiaries of a decades-long annual tradition that fetes the Portuguese capital’s beloved patron Saint Anthony, matchmaker extraordinaire.

Financed by sponsors and TV rights, broadcast live on television, couples who would not otherwise have the means are gifted a deluxe wedding worth 400,000 euros ($450,000).

Couples like fishmongers Tania Silva and Orlando Antunes, who are getting a one-off taste of mega fame on the eve of Saint Anthony day on June 13, the high point of days-long street-dancing, sardine-grilling festivities in Lisbon.

“We always joked that we would one day get married for Saint Anthony. It’s a sumptuous ceremony which we could never afford.”

For Tania and her sister brides, the day begins early at city hall.

For hours, they sit in front of identical mirrors in a room normally used for town hall meetings, Lisbon’s trademark trams passing in the street outside.

Hairdressers and makeup artists who competed nationwide for the honour of styling them busy themselves around the brides, a television presenter diving in for the odd interview, an anxious parent taking a quick selfie.

Tania’s slightly nervous. “I’m trying to keep calm but it’s difficult,” she says, laughing, as her hairdresser fixes her blond locks into an updo.

In the room next door hang the white wedding dresses, all donated by different designers.

“Breathe,” jokes one bride as a helper tightens her lacy corset.

All in all, 16 couples are getting married, five of them in a civil ceremony.

They go first, appearing on the balcony of city hall after the event, waving down to a cheering crowd as a band from Lisbon University plays a serenade and a television drone films the moment.

The 11 other couples are destined for the cathedral, some 650 metres (2,100 feet) away up a steep hill at the entrance of Lisbon’s famed Alfama old quarter.

The brides are driven up the cobbled street in convertible vintage cars, getting out one by one and forming an orderly line as they wait to enter.

There is still more to come. Group photos, the first dance, interviews, and another public appearance in a giant parade in the evening.

The wedding tradition was created in 1958 by the now defunct Diario Popular newspaper.

Dropped after the 1974 Carnation Revolution that overthrew the dictatorship, it was re-introduced by authorities in Lisbon in 1997.

Its origins, though, are far older. Saint Anthony of Padua was a Portuguese Catholic priest born in the 12th century and widely believed to have potent matchmaking skills.

To this day, single people are gifted statuettes representing him.

At home, they are supposed to turn his face to the wall as a form of punishment until they find their soulmate. Only then can Saint Anthony face the room again.

Over the years, the wedding tradition has evolved, with civil ceremonies now included, says artistic director Luis Moreira, while numbers have dwindled from a peak of around 60 to Wednesday’s 16 couples.

“It’s no longer called ‘Saint Anthony’s brides’ like in the old regime when it was focused more on women and was used to help young women find a husband,” he adds.

“With the equality of men and women’s rights, it’s become ‘the Weddings of Saint Anthony’.”

One of the requirements for the 40 to 60 couples who apply every year is that at least one of the pair lives in Lisbon.

“Lisbon’s population is getting older. The idea is to rejuvenate the city, to attract young couples and give them a hand at the start of their life together,” says chief organiser Maria do Carmo Rosa.

It is mostly about gifting “a dream wedding to people who would never have been able to afford it.”