Turf’s up for football, futsal and frisbee fans in the city | Lifestyle.INQ ❮ ❯ 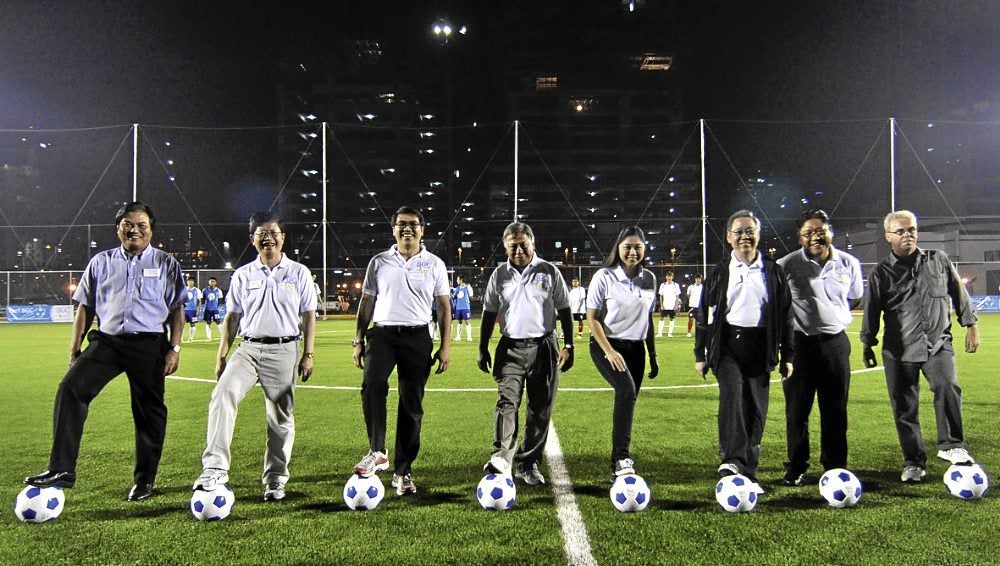 Turf’s up for football, futsal and frisbee fans in the city

The Rolls Royce of artificial turf is now here.

The certified Fifa-preferred turf producer  used the Max-S artificial turf, a double S-shaped ternate yam that looks so natural it even produces true ball-roll and traction. This luxurious abrasion-proof and soft surface has earned the title “Rolls Royce of synthetic turfs.”

“This is the embodiment of the live-work-play concept in Bonifacio,” said Tony Aquino, president of the Fort Bonifacio Development Corp.

Called the Turf BGC, it also has the latest technology in lighting system designed depending on demand, whether for practice games, tournaments or TV coverage. It has a three-meter-high permanent fence, and a 10-meter net with pulley system to lower it on windy days.

Turf BGC’s dimensions, smaller than your usual football field at 305 ft x 164 ft, is still within Fifa standards. The atmosphere is more intimate, as football players play a mere stone’s throw from wherever you may be seated or standing.

As the Azkals played against the UFL Galligan Stallions in an exhibition game on opening night, the bright illumination from the field attracted passersby to crowd around the fence. There were notably less cheers and gasps from the crowd, and that’s because it does have a smaller audience compared to stadiums.

Turf BGC makes the world’s most popular sport accessible to this side of the metropolis. With an hourly fee ranging from P1,680 to P4,300, Turf BGC is open to BGC residents, employees, locators, tenants and guests. Friday Night Football will also be organized for walk-in players and teams.

Aside from football, people can also play flag football, futsal and ultimate frisbee. Just don’t wear futsal or turf shoes. Only shoes with studs (FG and HG only) or spikes can be used on the field. While Bonifacio Global City is one of few pet-friendly establishments in the country, no pets are allowed into the Turf BGC.

“Turf BGC is part of BGC’s continuing promotion and support of a lifestyle that encourages a balanced live-work-play range of activities. Whether as a sport, a form of recreation or fitness, or merely a venue for healthy socialization, football has a global appeal that had captured BGC long before the country’s pride, the Azkals, rose to international recognition,” said Manny Blas II, BGC’s head of commercial operations.

Aquino said Turf BGC is the first in a three-part development of BGC. On the opposite side of the Turf BGC will rise a haven for runners, he continued, complete with running track. Away from the busy streets of BGC, Aquino said this area is going to be a safer alternative for runners.

A family-oriented park will be constructed beside Turf BGC. Aquino said there will be a total of six parks in BGC.

“We’ve been seeing the Azkals and Malditas (Philippine Women’s National Football Team) play here almost every day. It looks like football is going to be a major sport here,” Aquino said.