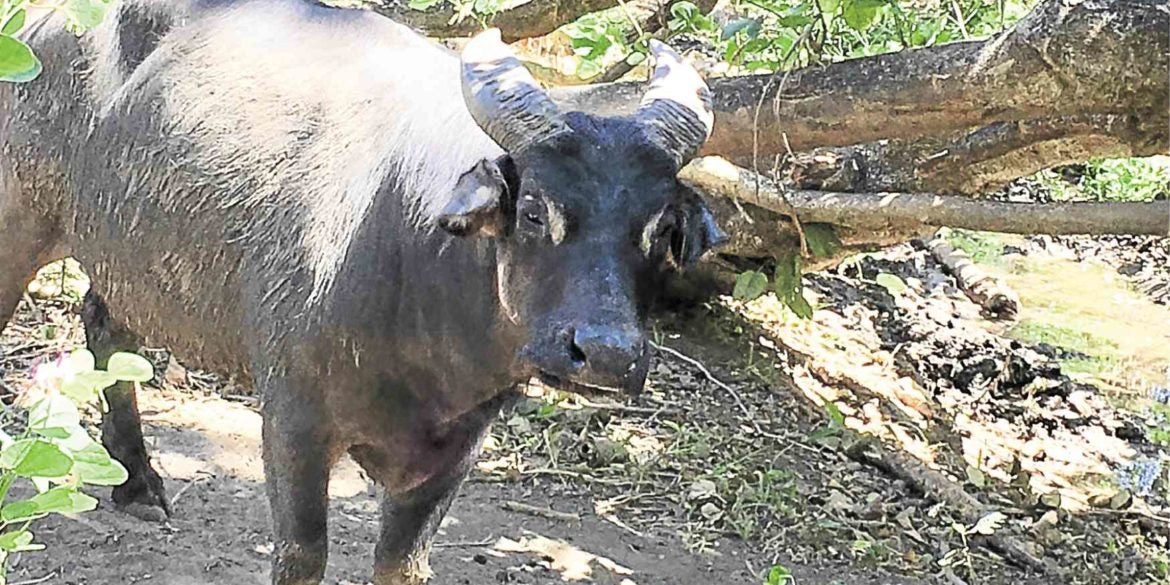 Kali looks content in his turf. — Alya B. Honasan

A birthday wish for Kali

The only surviving ‘tamaraw’ in captivity turns 20, a well-loved ambassador of his species—and a reminder of the urgent need to protect Philippine wildlife

Born in 1999 in the Tamaraw Gene Pool Farm in Mounts Iglit-Baco National Park in San Jose, Occidental Mindoro, established under Executive Order 544 in 1979, Kali is all that remains of early attempts to breed the animal to boost its numbers.

More than just the name of a university basketball team or a utility vehicle, as modern Filipinos know it, the tamaraw is a Filipino flagship charismatic species, a dwarf water buffalo found only in the unique biodiversity haven of Mindoro Island and nowhere else in the world—the Philippines’ largest endemic land animal.

Living in about half a hectare of fenced space in the farm, amid greenery and rolling hills, Kali appears quiet and gentle, although rangers manning the farm know well enough not to forget that he remains a wild animal. Visitors can actually lay their hands on those fabled, powerful V-shaped horns, worth millions as a hunter’s trophy some decades ago.

Kali wallows in a small pond, lies in the shade, and is fed grass regularly. During the recent El Niño, however, his diet had to change a bit, as even the tamaraw is not immune to the effects of climate change.

He gets monthly checkups by a volunteer wildlife veterinarian, and despite a corneal problem in his left eye, is free of parasites and generally healthy for a 20-year-old.

“The life span of a tamaraw is 20-25 years,” Pineda-David says. “Kali is our only living proof that they can survive to that age, and we hope he lives beyond 25.”

It may seem like a solitary and sad life for a wild animal—even Pineda-David admits that seeing a tamaraw running free in the wild is a life-changing experience—but it is a life that has certainly served a noble purpose: propelling the species to prominence.

Whereas there was a time only 10 percent of the population of Mindoro had seen a tamaraw, these days, it’s the other way around. Students on field trips, locals and visitors from other provinces and countries have seen Kali, making the animal an excellent ambassador for his critically endangered kind.

And endangered his kind remains. After some elation that the numbers, which dipped to a dangerous low of 100 or so in the 1990s, had slowly and steadily increased to about 523 as of the 2018 tamaraw count, 2019 figures again went down to 480.

The tamaraw count is an annual activity conducted by TCP with help from NGO partners like the Mindoro Biodiversity Conservation Foundation Inc. (MBCFI) and the Worldwide Fund for Nature (WWF) Philippines. MBCFI, an environmental NGO dedicated to conservation in the province, also helps out in the annual celebration of Tamaraw Month every November.

Although new populations have been spotted in areas like Sablayan, Occidental Mindoro, and Naujan, Oriental Mindoro, where they were once thought to have disappeared, Pineda-David reminds everyone that the threat remains very real.

“Yes, we are very worried,” says this career environmental worker, a Mindoro native who studied Animal Sciences at the Oriental Mindoro State College, and worked with the DENR in Manila for 15 years, before returning to her home turf to run the TCP.

“The tamaraw remains critically endangered, and hunting, poaching and habitat loss remain the biggest threats. Its habitat has been over-harvested. Natives and poachers have already infiltrated the animal’s 1,600-ha core area. The meat is poached for food, but we’re still a bit relieved that, upon investigation, we learned that the meat does not leave the province, so there is no black market demand for it as a delicacy.”

The tamaraw plays a key role in both Mindoro’s and the country’s biodiversity, says Pineda-David. “It stays in the mountain, and helps maintain the growth of plants.”

It has no known prey, and no predator other than, of course, the most insidious one of all, humans.

Pineda-David reveals that, after several years, the Tamaraw Conservation and Management Action Plan has been completed, with help from the International Union for the Conservation of Nature (IUCN), the influential international organization working in nature conservation and sustainable use of natural resources. The plan will be out by June or July, finally giving the program a definite direction.

The House of Representatives’ Committee on Basic Education and Culture already declared the tamaraw the Philippines’ national land animal in December 2017. The TCP is waiting for House Bill 4606, filed by Mindoro Oriental Representative Doy Leachon, to be signed into law.

Pineda-David still has her birthday wish list for Kali and the efforts to conserve his species. First and foremost is the prioritization of the TCP and its establishment as an office, and not just a special project dependent on fluctuating budgets.

“As a project, we don’t have much authority to run after poachers—walang pangil. In Thailand, they even have a National Elephant Institute,” she notes. “In fact, our budget was slashed by P1 million this year, and that affects all activities, and most especially our rangers.”

The wildlife rangers who protect the tamaraw’s habitat—also the habitat of hundreds of other species—are contractual workers with salaries ranging from P6,000 to P11,000 a month, all allowances and food subsidies already included.

The longest-serving ranger, who receives the biggest amount, has been at it for 33 years—and still has to shell out for his SSS and PhilHealth contributions, for reimbursement later. A supporter of the project, Occidental Mindoro Rep. Josephine Ramirez-Sato, is pushing for an executive order that will at least make the rangers a formal item in the budget.

Pineda-David gets emotional every time she talks about Kali and his kind: “The tamaraw is quiet, resilient, but will defend its young and its territory. It is so representative of the Filipino spirit.”

Pineda-David first fell in love with the animal when she was 15 and doing volunteer work for an environmental NGO, the Kalikasang Mindoro Foundation.

“When I finally returned to Mindoro to head the TCP, I knew taking care of the tamaraw was my calling. If we don’t do all we can to save it, and the tamaraw is lost, it would be our greatest shame.”—CONTRIBUTED