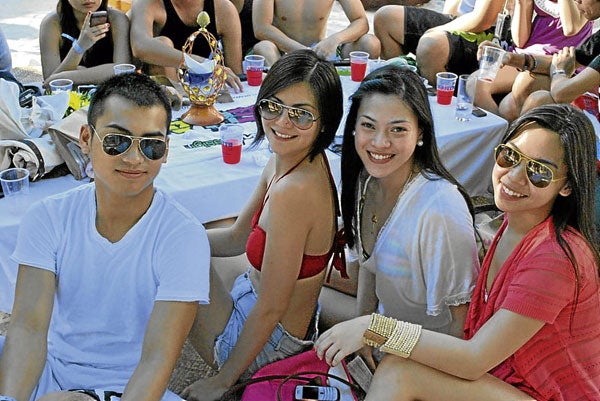 Chic eyewear for longest and sunniest days of the year

Summer may be gone but the sun is still shining and the sunset is coming later and later: The 21st of June, in fact, is expected to be “the longest day of the year,” dahlings. So don’t leave your sunglasses out of your sight.

To help you do that, palanggas is the latest line of hip and totally cool-looking Police eyewear. Its iconic “blue lens” had everyone raving during its launch in that success story, Seventh High, natch! 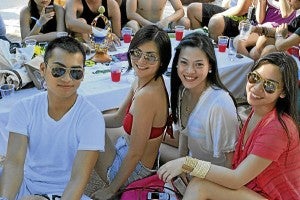 The party ended with “Younique awards” given to two hip guests who won their own pair of Police Eyewear, dahlings.

Police is available in all major department stores and eyewear shops.

Sunset time on renowned Boracay beach never fails to put that bronze glow on the bodies of guys and babes.

These beach bums go to the gym all year just to show off their perfect anatomy during summer or the holidays. What’s noticeable is that they loll on the beach with their Mint shoes strung casually around their necks.

Of course, they wear their Mint shoes as they tread the sands of Boracay. 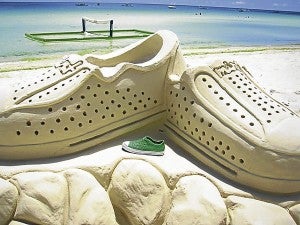 Mint was on the beach again this year with the recent hot happening “Rehab,” an awesome bash for Mint Design footwear, at the classy Discovery Shores resort.

“Made from 100-percent recyclable and biodegradable material, the shoes provide amazing breathability and comfort, besides being waterproof, heatproof and completely sand-friendly, which is important, naturally, being that the launch happened on Station 1, where the sand area is considered the widest and most beautiful in all of Boracay,” said Christine Napoleon, dahlings.

Bikini-clad “nurses” in Mint footwear handed out vodka shots in test tubes and syringes; burgers, tacos and grilled seafood were consumed in direct proportion to the beer; and biceps and abdominals flexed and flashed as NY-based DJ Deftmix spun his magic beach noise.

Mingling with the crowd were super couple Jimmy and Jenny Napoles, who were the perfect hosts, along with their smart and attractive children: Christian, Christine and James who is, in fact, one of the Mint Design partners; former Boracay resident Louie Cruz (also my best pal from our European days when his father was ambassador to Germany, England and Holland); photographer Sandro Rieta; love-couple Borgy Manotoc and Georgina Wilson; the always hot KC Montero; and hundreds of young, sexy things who partied as if it were spring break in Miami, would you believe, dahlings.

The staff served up an unending flow of alcohol, beach food and dessert as the sunset party turned to all-night dancing.

By the end of the six-hour party, the crowd was totally bronzer and giddier. They attacked the gigantic shoe sculptures near the shore, palanggas.

The launch might be over, but the Mint Design Crew, being the crazy kids that they are, are already talking about the next one. Knowing these guys, it will be very, very soon, but till then, we’ll be chillin’ in our Mints, natch! 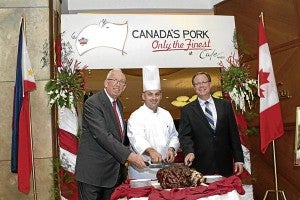 It was definitely a gastronomic treat, palanggas, when the five-star Marco Polo Plaza Cebu (MPPC) hosted a food festival to promote the distinct flavors and goodness of Canada. This was through the exceptional event Canadian Pork Promotion at the hotel’s award-winning Café Marco restaurant.

Throughout the night, the Queen City’s hotshot namedroppables from government, business, diplomatic and hospitality sectors were treated to an almost endless array of sumptuous Canadian pork-inspired specialties and fine Canadian wines, naturellement. 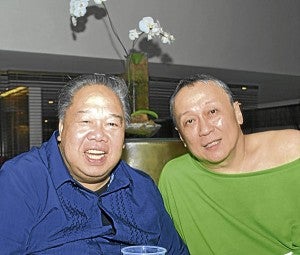 The hotel became the proud host for this weeklong Canadian food promotion by showcasing the best of Canadian pork—a world-renowned premium product known for its freshness and high-quality taste, palanggas, making Canada one of the largest meat exporters in the world, with the Philippines, would you believe, as its “sixth largest market for pork products.”

The happening had the special invitees “experiencing the best of Canada made more delightful with the participation of Marco Polo’s distinct, warm hospitality and impeccable service,” said the hotel’s communication officer, Aileen Quijano.