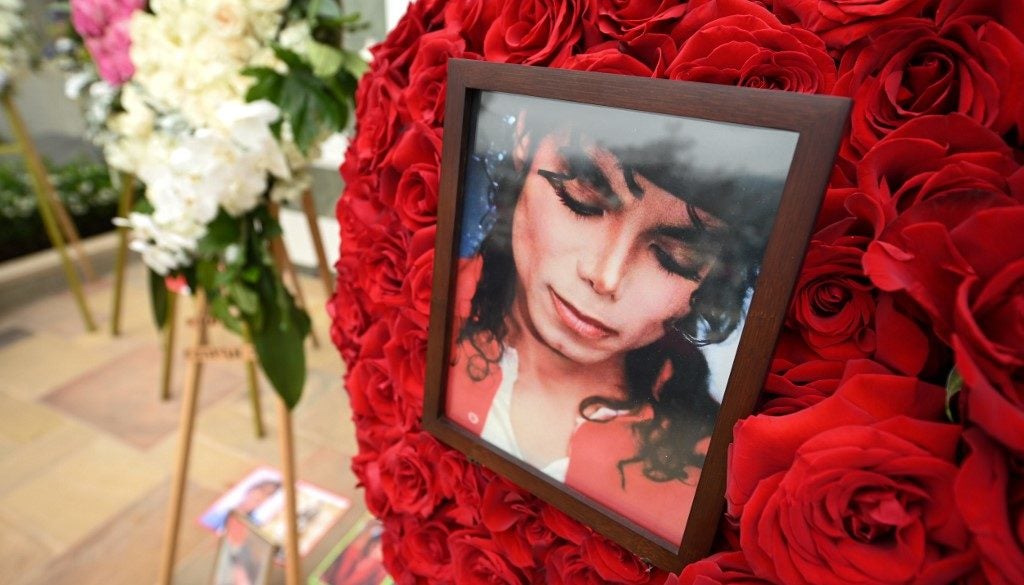 Pictures and flowers placed by fans gathered outside Michael Jackson's final resting place at the Holly Terrace mausoleum in Forest Lawn Cemetery in Glendale, California to remember the King of Pop on the 10th anniversary of his death, June 25, 2019. (Photo by Robyn Beck / AFP)

Michael Jackson fan clubs are set to sue two alleged child abuse victims of Michael Jackson in a French court this week over their claims in the recent HBO documentary “Leaving Neverland”.

Thursday’s hearing will take place at a court in the northern city of Orleans where the Michael Jackson Community, the MJ Street and On The Line groups will begin proceedings against the men they accuse of sullying the image of the late singer.

The four-hour documentary broadcast on US channel HBO focuses on testimony by James Safechuck, 41, and Wade Robson, 36, who recount separate but consistent accounts of how their idol molested them as boys at his Neverland Ranch in California.

The two-part film, which was released in March, broke streaming records and prompted the Jackson family to sue for $100 million (88 million euros).

The French lawyer acting for the fan groups, Emmanuel Ludot, called the allegations “extremely serious” and likened them to “a genuine lynching” of Jackson, who died in 2009.

Under French law, sullying the image of a dead person is a criminal offense, unlike in Britain or America where libel and defamation laws do not offer this protection.

The fan clubs are seeking symbolic damages of one euro each.

Ludot had previously successfully sued Jackson’s doctor Conrad Murray for causing distress to his fans by giving the US pop legend the drugs that killed him.

Five Jackson fans won symbolic damages of one euro each in 2014 after the court in Orleans agreed they had suffered “emotional damage” from the pop star’s death, but the ruling was seen as legally dubious by experts.

A number of radio stations,  from Australia to Canada have stopped playing Jackson’s music after the HBO documentary was aired, and the creators of “The Simpsons” also shelved one of the animated series’ classic episodes because it featured Jackson’s voice.

Jackson died in 2009 aged 50 from an overdose of the anaesthetic propofol while under Murray’s care, as the “King of Pop” rehearsed in Los Angeles for a series of comeback concerts in London.