Virgin Labfest 15: Is the festival in dire need of new pairs of eyes in its selection committee? | Inquirer Lifestyle ❮ ❯ 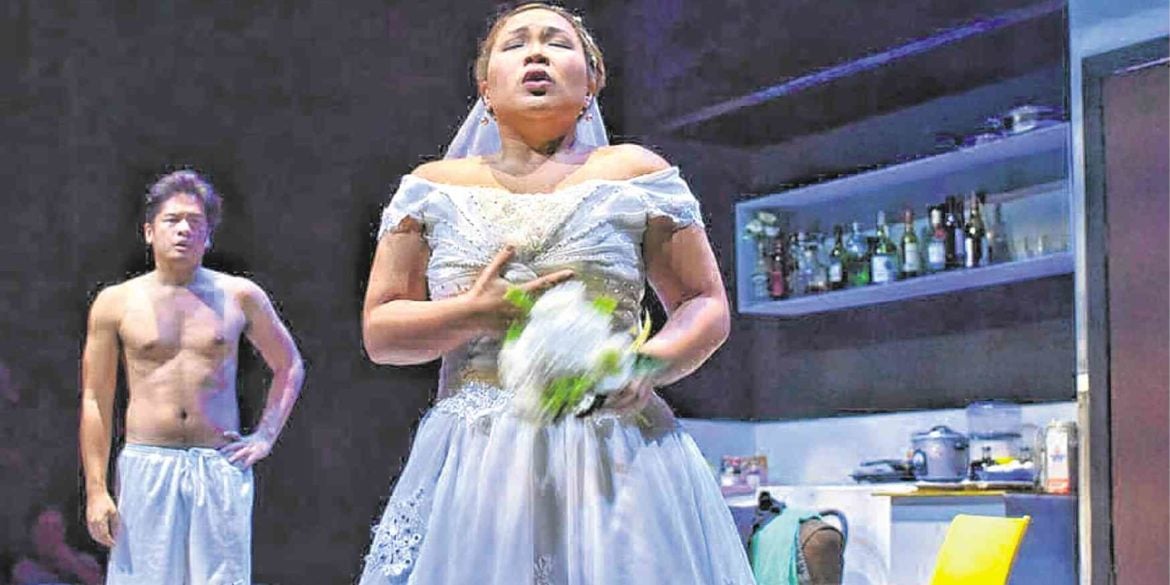 Virgin Labfest 15: Is the festival in dire need of new pairs of eyes in its selection committee?

The theme for Virgin Labfest 15, closing tomorrow at the Cultural Center of the Philippines, is “titibok-tibok,” the human heart as onomatopoeia. Aptly enough, the 12 new works in this festival of “unpublished, unstaged” plays have accidentally coalesced into an examination of society’s crux—the family as beginning and end, cause and effect, of every human connection.

In Herlyn Alegre’s “Fangirl”—by a mile, this Labfest’s most accomplished entry, and one of the year’s best plays so far—family transcends blood ties. Its premise: Three old friends reunite to buy tickets to their favorite boy band’s reunion concert.

As far as the festival is concerned, “Fangirl,” directed by Charles Yee, is a frozen, finished product. Through exuberant, richly detailed writing, the play acquires an airtight, fully inhabited quality to it. As the three friends fighting tooth and nail over a single VIP ticket, Mayen Estañero, Marj Lorico and Meann Espinosa deliver high-octane performances that leave you gasping for air and wishing for more.

“Fangirl” may be the festival’s funniest entry, but the most audacious is Rick Patriarca’s “Wanted: Male Boarders.”

Here, three male friends must contend with their boarding house’s newest resident (Lance Reblando, in a supernova turn), and eventually, with their individual identities. Imbued with a go-for-broke aesthetic by director George de Jesus III, the play becomes a modern descendant of Dingdong Novenario’s “Kafatiran,” the 2011 Labfest entry that transplanted gay politics to the time of the Katipuneros.

“Wanted Male Boarders” is also a statement on its author. Third time’s the charm for Patriarca: This latest piece successfully combines his skill for rigorous character writing in “Birdcage” (2017) with his eye for broad comedy, first evinced in his breakthrough play “Hapagkainan” (2016).

Meanwhile, U Z Eliserio’s “Anak Ka Ng,” about a convoluted relationship between an OFW mother and her daughter, initially appears to tackle banal territory.

But what it captures perfectly—and what playwright Maynard Manansala’s directorial debut gets right—is the tone of toxic, adult relationships, where conversations are fueled by passive aggression and abound in non-sequiturs.

Here, the mother and daughter are long past pure hurt; they have settled with trying to one-up each other through sarcastic jabs and testing each other’s limits.

If the play occasionally lapses into speechifying, it matters not. The mother-daughter pair of Skyzx Labastilla and Krystle Valentino completely sells their characters’ tortuous emotional dynamics, as only those who truly, deeply love each other can.

‘The Bride and the Bachelor’

In Novenario’s “The Bride and the Bachelor,” love is ambiguous—and ambiguity is the point. On her wedding day, the titular bride shows up at her ex’s place, and what unfolds is the kind of cerebral, conceptual challenge that may understandably turn some viewers off.

Once you buy into the time-bending conceit, however, the rewards run aplenty, the ensuing conversations on marriage and the play’s no-man’s-land setting given a spunky, corporeal touch by the spirited pairing of Via Antonio and Alex Medina (in a more-than-capable stage debut). And Topper Fabregas’ polished, no-frills direction constantly reminds us that what we’re seeing is not exactly of this plane, even though what we’re hearing most definitely is.

“The Bride…” can teach Anthony Kim Vergara’s “A Family Reunion” a thing or two about taking the unsafe path. Directed by Ian Segarra, Vergara’s play, with its cutting, naturalistic dialogue and near-perfect ensemble playing, is straight out of Tolstoy: “Every unhappy family is unhappy in its own way.”

Until the play forces happiness, and an artificial resolution, on its characters. Halfway through, “A Family Reunion” devolves into cheap melodrama—somebody delivers a monologue set to vapid music on a spotlight; soon after, the patriarch (conveniently) reveals he has terminal cancer, igniting that cop-out of an epilogue. Still, Chrome Cosio, Joshua Tayco, Gie Onida and especially an enchanting Sabrina Basilio deliver seamless, mesmerizing ensemble work here.

Raymund Barcelon’s “Huling Hiling ni Darling” is basically Raymund Reyes’ “Ang Naghihingalo” from 2014—a family squabbling in the hospital while dealing with a critically ill patient—only not as triumphantly hilarious, and written like an eye-roll-inducing soap (betraying the playwright’s TV background).

Overreliant on lazy monologues for plot advancement while infested by far too many purposeless characters, this is prototypical, promising-but-flawed, “virgin” material.

Rolin Migyuel Obina’s “Ang Pag-uulyanin ni Olivia Mendoza,” on the other hand, has Celeste Legaspi going full-on camp to buoy the proceedings. But she isn’t enough to conceal this play’s lack of lucidity—Phil Noble’s inchoate direction, the poorly researched attempt at a character suffering from multiple mental disorders, and its careless handling of (trans)gender politics. In the end, the play comes off as a massive joke only Legaspi fully commits to.

The attempt at inserting mental illness into the story is even more ill-conceived in Layeta Bucoy’s “The Unreachable Star”: It’s basically an afterthought and a plot twist rolled into one. By the time that stab comes along, you’re exhausted from listening to this Mara Marasigan-directed play, which mistakes exposition for dialogue, and tawdry revelation for genuine story development, the characters talking like they’re in a Q&A and existing in a vacuum.

Nicolas Pichay’s “Larong Demonyo,” about a young man confronting the aging general who tortured his family during martial law, is another tedious production. For one, its meandering script is stuffed with “smart” dialogue that must have looked good on paper.

In different hands, the play might have worked. But between Jose Estrella’s bafflingly tensionless direction and a woefully miscast Leo Rialp as the general, it only disappoints.

All the tired tropes and hackneyed expressions of kabaklaan are lumped into this protracted excuse of a play about a gay couple celebrating their anniversary and bickering over the pros and cons of having a child. It is unfunny, littered with strained characterizations, apparently ignorant of artificial insemination, and has a dreadfully written female character who is made to do nothing for majority of the play.

At least “Surrogare” has a firm concept to it; Ryan Machado’s “Isang Gabing ang Buwan ay Hila-hila ng Gula-gulanit na Ulap,” directed by Paolo O’Hara, is a puzzlement from start to finish—surely qualifying as an all-time low for this festival.

In brief, what this play manages to do is include small-town politics, tokhang and Duterte’s drug war, male homoeroticism and the myth of the aswang in its script. What it fails to do is weave a sensible draft out of those elements.

The inclusion of “Surrogare” and “Isang Gabi” really makes you question the festival’s selection process. That these two, out of a record 207 submissions, still made the final cut only reflects on the quality of the rest of the submissions.

Either that, or the festival is in dire need of fresh, new pairs of eyes in its selection committee. If the selection process were truly blind and unbiased, then the fact that more or less the same names keep turning up year after year speaks volumes of the way the plays are being chosen.

Of course, the Labfest is about unveiling new, “virgin” works. But surely it can do better than settle for a world in which the likes of “Fangirl” and Dustin Celestino’s punctiliously written “Mga Eksena sa Buhay ng Kontrabida” in the Revisited section are forced to exist alongside “Surrogare” and “Isang Gabi…” —CONTRIBUTED