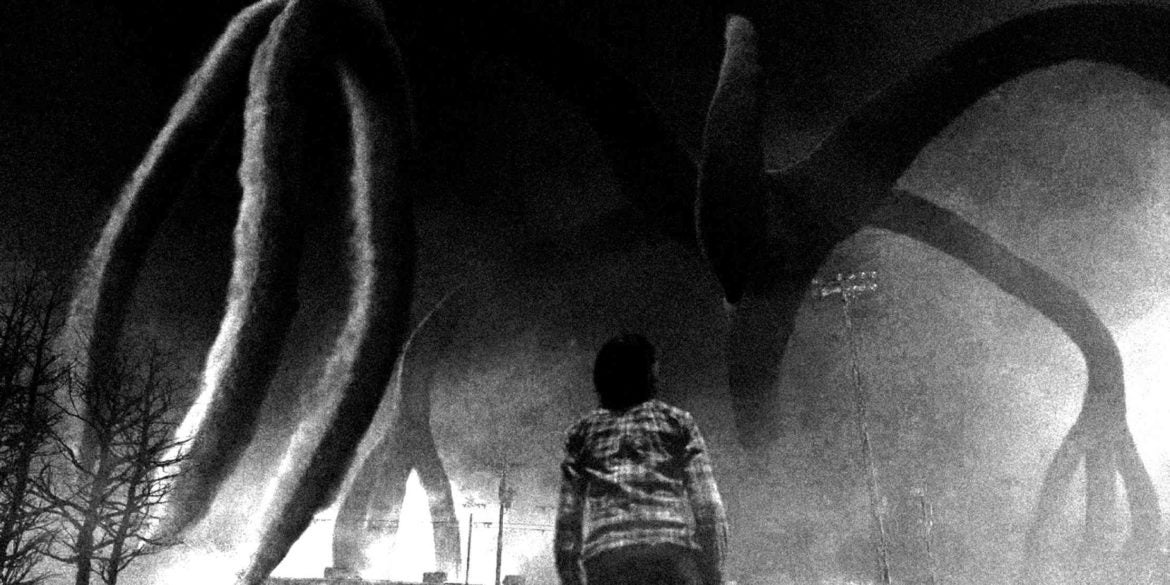 While the 1980s-era town of Hawkins, Indiana of Neflix’s “Stranger Things” appears, on the surface, as a boring, cookie-cutter slice of nostalgic Americana, the threats that arrive from the Upside Down are anything but your typical monsters of the week.

Just as the show is a cutting-edge 21st-century creation that wraps the 1980s around it like a cloak, the main monsters of “Stranger Things” are very modern creations. The creatures reflect the classic iconography of The Other, but in a sleek, unrecognizable way. The underpinnings of the creatures can be traced back to H.P. Lovecraft and H.R. Giger, but they are very much an evolved form of the otherworldly found in TV and cinema.

Perhaps the most fascinating thing about the two monsters of “Stranger Things” is that, while the monsters are more science fiction and horror in orientation, their in-show names are derived from Greek mythology and, of course, the iconic tabletop role-playing game Dungeons & Dragons, something the shows’ creators the Duffer brothers acknowledge often and easily.

So when walking in Hawkins after dark, beware.

The first season’s monster derives its name from a demon lord of mythology as well as a two-headed creature from D&D. But the creature we encounter on the show is not quite just that.

When Will Byers is trapped in the Upside Down, he is stalked by a creature unlike any other he has seen: seemingly humanoid, armed with claws and tendrils, and with a horrific “flower” of teeth instead of a face. Also encountered fatefully by Eleven, the Demogorgon is drawn by blood and hunts Will when he is trying to reach across the veil to contact his mother Joyce. The Demogorgon is able to travel between dimensions, making him a two-way threat.

It winds up capturing Will (he of course later escapes), kills Barb and travels to the regular Hawkins where he terrorizes the kids until it is destroyed by Eleven.

The true horror of the Demogorgon didn’t become apparent until the second season, where it turned out there was more than one of them. In a horrific twist on the evolution familiar to Pokemon players, the Demogorgon starts in one form and evolves five times into the adult Demogorgon. Starting as a slug, it steadily grows. We know this because Dustin unfortunately finds a slug—he names it Dart—and secretly takes care of it like a pet. By the time it grows to the size of a big dog—Dustin named this form the “Demodog”—it eats the Hendersons’ cat.

But it turns out the Demogorgon was not even the real danger.

Another creature with a name drawn from the pages of the D&D manuals, the Mind Flayer is revealed to be the true threat of “Stranger Things.” It is the hive mind that commands the Demogorgons, and can control hosts with a bit of it planted inside—such as the unfortunate Will. This ability to manipulate Will becomes a truly twisted way of attacking reality. Like Will, the Demogorgons were merely the minions—the Mind Flayer is the master.

Even most bizarre in form than the Demogorgon, the Mind Flayer is a huge spider-like monstrosity with a weirdly shaped head in the Upside Down, always appearing in storm clouds—this is why Will refers to it as the “Shadow Monster.” It doesn’t even have to physically be in Hawkins to be dangerous—it can use its controlled agents or simply attack from the Upside Down. Its very appearance is clearly designed to make the human mind reel from its alien-ness. It even reminds one of the spider-like ninth angel Matarael from the classic animé “Neon Genesis Evangelion.”

While the Demogorgon was a more animal-like predator, there is a burning intelligence behind the Mind Flayer that drives it to kill humans, something it can continue to do, as it survived season 2, even though it was foiled in its attempts to destroy humanity thus far.

Of course, it can easily be argued that the true monster of “Stranger Things” is not even otherworldly. Dr. Martin Brenner (Matthew Modine) was amoral, relentless and would do anything necessary to see his research finished—no matter the collateral damage. By the way, Dr. Brenner, Eleven would like a word with you…

As “Stranger Things” season 3 is upon us, it is now 1985 in Hawkins, and something strange and perhaps even more horrific stirs right under the noses of the humans. Is it a new danger? Is it a monster returned? Catch the new season of “Stranger Things” streaming on Netflix.