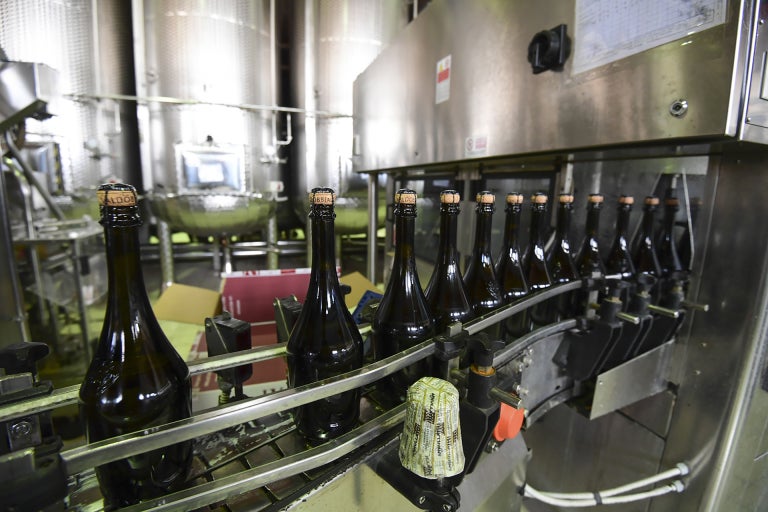 A picture taken on Feb. 26, 2019 in Valdobbiadene, in Veneto, shows the bottling chain of the Drusian vineyard house. Three weeks before a deadline for an agreement on Brexit, Italian producers are paying close attention on a potential withdrawal of the U.K. from the E.U., a crucial market for them as some 130 million bottles of Prosecco are exported each year to the U.K. Image: AFP/Miguel Medina

Italy’s Prosecco hills northeast of Venice, which have been cultivated for centuries, were on Sunday added to the World Heritage list by the United Nations cultural organization.

The Conegliano and Valdobbiadene hills, where the grapes that produce the famous Prosecco sparking wine are grown, got the green light at a meeting of UNESCO’s World Heritage Committee in Baku.

“The landscape is characterised by ‘hogback’ hills, ciglioni — small plots of vines on narrow grassy terraces — forests, small villages and farmland,” UNESCO said in a statement announcing the decision.

“For centuries, this rugged terrain has been shaped and adapted by man.”

Italy has been lobbying to have the hills, which stretch for 30 kilometers (nearly 20 miles), receive this recognition for a decade. On Sunday, the region became Italy’s 55th World Heritage site.

The Prosecco sparkling white, which has the highest classification available to an Italian wine, is produced in a territory spread over nine provinces in Italy’s northeast.