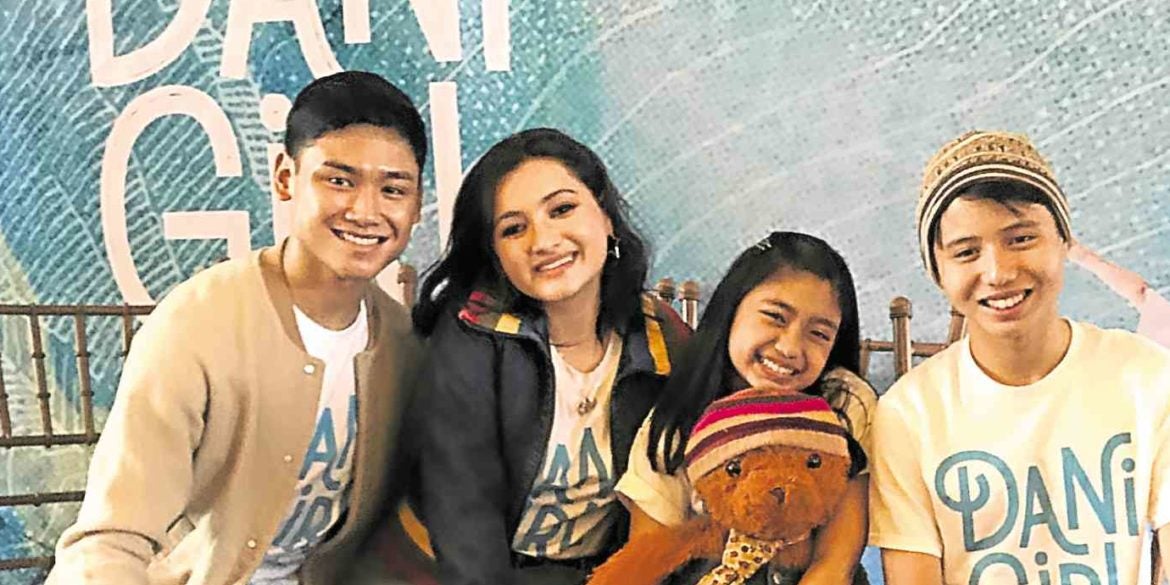 The Sandbox Collective is celebrating its fifth year with the restaging of its heartwarming maiden musical “Dani Girl,” this time with younger actors.

“Dani Girl” is the story of a feisty 9-year-old girl with leukemia who goes on a “magical journey” to get her hair back through the help of her imaginary buddy Raph and teddy bear Mr. Fritz. She befriends Marty, a movie geek who is battling Hodgkin’s lymphoma, and engages him to join her adventures. But they can only have fun through their imagination since they are stuck—and dying—in a pediatric ward.

Completing the cast are Lorenz Martinez and Juliene Mendoza as the vibrant guardian angel Raph, and Shiela Valderrama-Martinez and Pam Imperial as the religious mom Katharine Lyons. Musical direction is by Ejay Yatco; choreography by Stephen Viñas.

The off-Broadway show with book and lyrics by Christopher Dimond, and music by Michael Kooman will open Aug. 10, at Carlos P. Romulo Auditorium in RCBC Plaza, Makati City. It is copresented by 9 Works Theatrical.

The musical is set in the early ’90s in a Pittsburgh hospital, and Pangasinan Rep. Toff de Venecia is directing it with an emphasis on hope.

“Doing ‘Dani Girl’ again is necessary with all the sadness and divisiveness that’s happening around the world,” De Venecia said. “It asks all the hard questions: Why is cancer? Why is hope? Why is God? Why is death? The show challenges these realities, rather than accepting everything as is; it forces you to think.”

The child actors bring fresh perspective into the show, but there’s no special treatment, De Venecia added. “I treat them the same as adults and demand just as much, but I’m more careful with the language and in approaching sensitive topics. I also collaborate with their parents so the kids are properly guided at home when they leave the rehearsal hall.”

Quesada agreed, “We were surprised during rehearsals hearing the kids talk about existential stuff, and we’re like, ‘Where’s the food?’”

Now 21, Coates said that she has a more grown-up understanding of the material. “I revisited the script and discovered things that I never knew at 16, but the core is the same—focusing on the little things, on friendship and family, and on being child-like, since there’s a little girl in every woman, and a woman in every little girl.”

Having kids around also attracts an invigorating energy. “They bring so much youth!” Quesada said.

Sandbox’s “Dani Girl” 2019 is subtitled “A Musical About Hope” (it was previously staged as “A Musical for the Soul”). The difficult subject of cancer is presented via both hilarious and distressing storytelling (ready your heart and bring tissues), reminding the audience of our capacity to cope.

So how important is it for kids to grow up with hope in a hyperconnected world?

Napuli said that “children are forced to grow up faster than they should, and such situation is heartbreaking. A child should have hope and faith in everything, because being a child happens once—it’s not something you can go back to.”

Drilon, who the cast affectionately calls “Dani Boy,” noted the many events happening which are amplified by social media. “These things can bring you down sometimes, and hope is most essential for children, because how can you solve a problem without it?”

Aside from advocating hope, “Dani Girl” is also an education campaign on pediatric cancer. There will be talk-backs after each show with experts from partner organizations such as St. Luke’s Medical Center, Carewell Community Foundation, Childhaus, Make-A-Wish Philippines and Cancervants.

“Dani Girl: A Musical About Hope” will go on stage Aug. 10-Sept. 1 at the Carlos P. Romulo Auditorium in RCBC Plaza, Makati City.