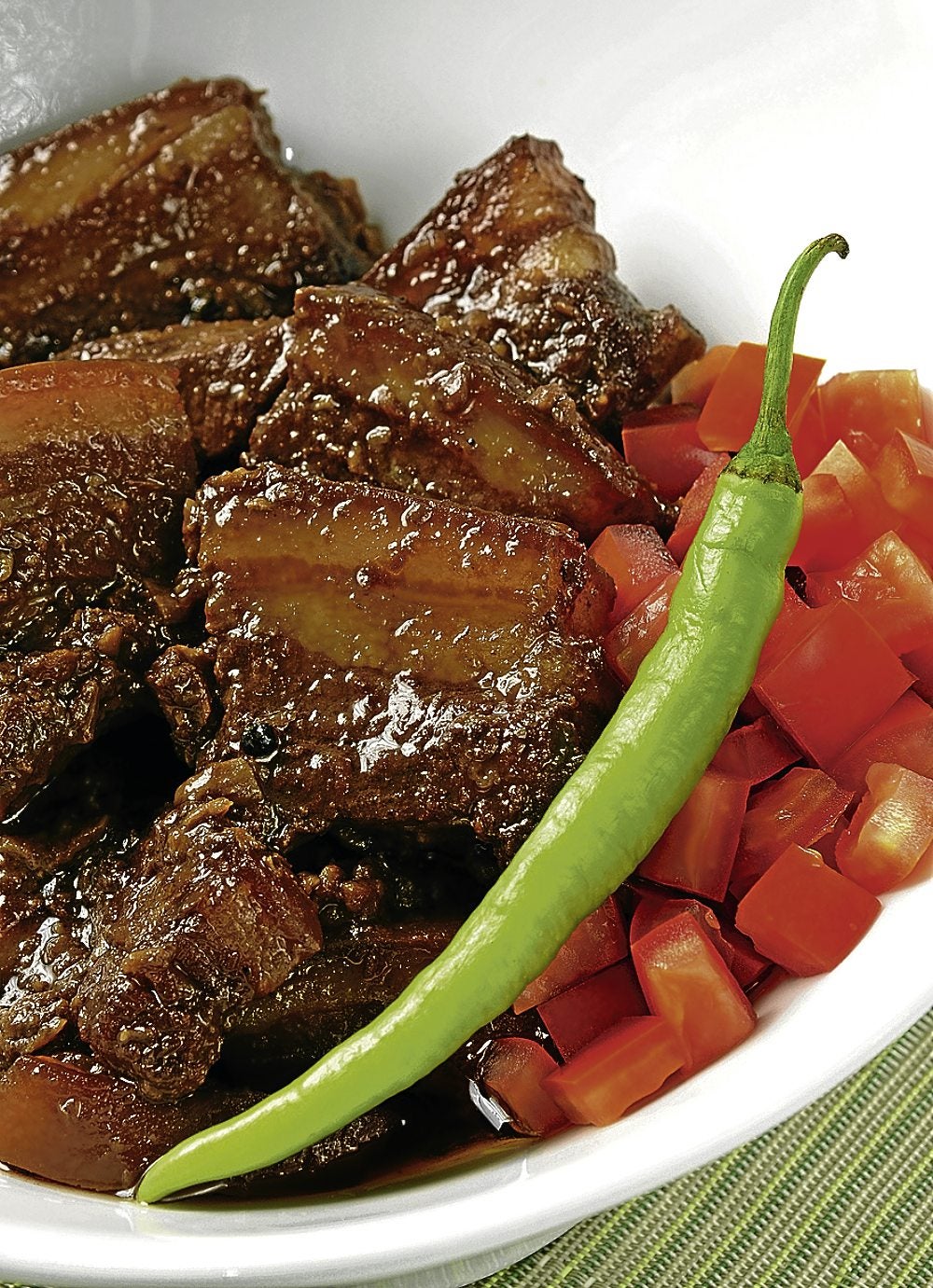 When you stew pork belly in dark soy, brown sugar, garlic, peppercorn, vinegar and bay leaf, then season it with bagoong alamang (fermented shrimp paste) and coconut cream, what do you get?

Couple Jerry and Eleanor Ty whipped it up after they craved for adobo and pork binagoongan at the same time late last year.

Eleanor asked Jerry, who loves to experiment in the kitchen, to cook adobo for  dinner. But Jerry instead yearned for binagoongan.

“Just to give in to our desire,” says Jerry. “I’ve made traditional adobo, then spiced it up with bagoong and gata. Surprisingly, it clicked. We were both happy. It’s been a family favorite since then.”

The liempo (pork belly) is marinated for a few minutes in vinegar, soy sauce and brown sugar. It’s then sautéed with garlic, peppercorn, bay leaf and shrimp paste (bagoong). When the meat is tender, coconut cream is added for creamy flavor.

To give it a kick, siling haba (finger chili) is finely chopped and added to the mixture.

This produces a delicious blend of flavors that cut nicely into the tender pork belly, now bathed in its own fat and fused with coconut milk. The inclusion of shrimp paste gives a richer aftertaste, with an assortment of flavors playing in the mouth—salty from soy and bagoong, sour from vinegar, spicy from chilies, and sweet from brown sugar that actually neutralizes the lip-smacking experience.

This dish is truly sinful and deadly, but it’s heaven with each bite. Most especially, says Jerry, if it’s served with very good rice, such as Milagrosa or Thai jasmine rice. Plus, tomatoes and salted egg on the side.

The Ty couple has been married for 11 years, with two lovely daughters, Dominique, 10, and Danella, 8.

They grew up eating Chinese-style adobo, which is a sweeter version with fermented soy and star anise. Sometimes, they add gluten to extend the adobo meat. They also add oyster sauce.

They also enjoy traditional Pinoy adobo, either with chicken or pork, or both.

Jerry also began tinkering around the kitchen at age 10. Since his mother hardly cooked at home, he would cook his favorite food himself. The sight and smell of his paternal grandma’s cooking left in him a strong love for fine food. A medical technology graduate of Far Eastern University, Jerry continues to pursue the joy of cooking and eating.

In 2004, Jerry and Eleanor joined the 2nd Century Culinary Meet and bagged the grand prize for the Amateur Division. This inspired them to open a cooking center, Kitchen Hobbies, in Binondo in November 2004. They moved to Mayon, Quezon City, in 2006.

Marinate pork with vinegar, soy sauce and brown sugar for 30 minutes. Sauté garlic in a pan until aromatic. Add peppercorn, bay leaf and shrimp paste. Add pork belly and cook until it changes color. Add marinade, chili and water. Simmer for an hour or until meat is tender.