At 86, Ding Roces is still on a voyage of self-discovery | Lifestyle.INQ ❮ ❯ 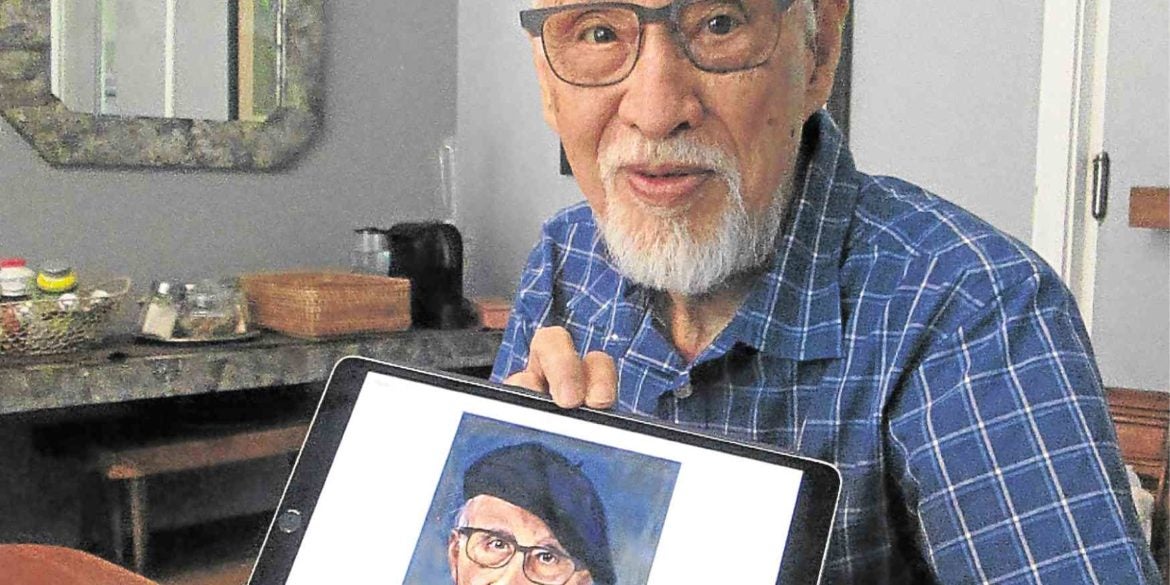 Showing off his self-portrait

At 86, Ding Roces is still on a voyage of self-discovery

It is hard not to hear the trace of an eager schoolboy in the raspy voice of this octogenarian who paints, enough to fill a retrospective twice in his lifetime, and writes articles and books.

To those who recall the pre-martial law Manila Times, he was a columnist there for 20 years. He said, “I was vocal about a Marcos takeover. My cousin Chino was thrown in jail, but Marcos regarded me as persona non grata. My passport was withheld. In those days, journalists got opportunities to travel through their passports. I felt deprived of professional growth on top of which I couldn’t write (the newspaper was shut down), and I had no income. Without a passport, I felt cramped.”

But the incident that pushed Alfredo “Ding” Roces to leave the country for a less encumbered life in Australia where he and his family could enjoy freedom concerned the publication and launch of the Filipino Heritage series.

Roces recalled, “I was invited to Australia to supervise its publication. The publishers helped me get a residency. I couldn’t get a passport, I tried all kinds of ways to do it, pressed all kinds of buttons on the Marcos side, knew somebody close to Enrile or Enrile himself and saw him for a few seconds.”

And then he approached the military person at the Department of Foreign Affairs, a Lieutenant Chanco, who quizzed him, “What’s this you’re saying that we hold passports? We don’t hold passports!” Whereupon the officer opened a drawer, got Roces’ passport and threw it on the table, saying, “There’s your passport!” Roces tried to take it, but Chanco grabbed it back and marched down the corridor to the consul’s office, then walked away.

Roces asked the consul: “Can I have my passport back?”

The consul replied, “No, because he said you can’t go,” pointing to the retreating back of Chanco.

Roces pleaded, “Can I please have a receipt that you have my passport?”

The consul gave him a two-inch-long piece of paper where he scribbled the number of the passport.

The writer-editor said, “That convinced me that I had to get out of the country. I tried different people, tried anyone connected to Malacañang. One day I was told the passport was ready. I never intended to be a permanent resident of Australia. I thought it would be very temporary.”

When the publisher had produced samples of the Filipino Heritage series, these were brought to Malacañang. The publisher told him about the President’s reaction to the surname of Roces as editor. The publisher clarified it was Alfredo, not Chino, saying, “It’s the one with the beard.”

It turned out, the publisher said, that Marcos wanted the title of editor for himself and to control the whole series.

Roces told the publisher, “If Marcos is the editor, you’ll sell millions of copies. He’ll make it required reading for every school.”

But the publisher stood by Roces as editor. Preparations were made for a launching at the Cultural Center of the Philippines where the organizers rented a place for the event. However, when Roces arrived, the lights were out, the escalators and elevators weren’t working. There was an exhibit of blown-up photos from the book, but nobody could view them because of the power outage.

He said, “We went through a lot of trouble, even the guest of honor, the assistant education secretary, was there, but it seemed the project was being banned. So we bought candles to light up the place.”

CCP’s Tony Quintos, a good friend, whispered to Roces while waiting for the lights to go on that “this was the only way the Marcoses could discourage people from supporting the project.”

Roces said, “All my friends in journalism didn’t show up although invitations were sent to them, except for Rosalinda ‘Baby’ Orosa. I was reminded of that Mark Twain essay, ‘To the Person Sitting in Darkness.’ The message I got was, things had changed.”

But it wasn’t as though the Marcoses and Roces were mortal enemies. Before martial law was declared, then First Lady Imelda Marcos tapped Roces to be a CCP consultant. He designed the CCP logo based on the Katipunan flag, but Ms Marcos wanted it to stand for three other “K’s”: kagandahan (beauty), katotohanan (truth) and kabutihan (goodness).

Thus did he find himself in the land of Oz (short for Australia) where he had been a permanent resident since 1977 and where three generations of his family live.

He said, “I hold a Philippine passport. My heart is still in the Philippines. I prefer to exhibit here than there where I found it hard to get established as an artist.”

He had an earlier retrospective at the CCP Small Gallery upon the invitation of Ray Albano. Roces felt he had to make a statement about the stifling of all manners of expression under martial law. He put a drawing of a bird inside an Ifugao basket. The gallery visitor, if he was attentive, should open the basket, fish out the drawing, unfold it and see the drawing of a bird in flight, symbolic of freedom.

Roces’ father Rafael knew that his youngest son liked art and painting. The older man was also ambitious and wanted to get no less than Fernando Amorsolo to tutor him but instead Alfredo had private lessons with another great teacher, Dominador Castañeda, in high school.

Younger Roces said, “My father was supportive, but he didn’t give dole-outs. Rather, he gave opportunities. When I was newly married to Irene Pineda and getting settled in our Pasay home, a block away from my father, he commissioned me to do a still life painting for which I was paid P45. Today that painting sold at an auction house for thousands of euros.”

Although his father was poor in many things, he was great in pioneering ventures. He was an entrepreneur and nationalist who was also in the arts. He founded the Philippine Columban Club, Wack Wack Golf Club, all Filipino clubs to counter the American Army and Navy Club’s sense of superiority over colonized Filipinos.

Through the family’s Ideal Theater, the older Roces brought in MGM movies, set up The Manila Times, La Vanguardia and Taliba. Old man Roces developed his own black-and-white photographs. His son’s regret is not having encouraged his father to write his life story.

Roces also remembered vividly how “the Japanese made life difficult for us. We fled to Batangas all to the way to Taal where the Japanese didn’t follow us anymore. My father kept a diary during those six months when we were fleeing, but the words were terse.” Among the projects Roces has in the burner is to reconstruct his father’s diary by getting the versions of an elder brother to fill in the gaps.

As for his mother Inocencia Reyes, she was an opera singer, “but none of us inherited the voice. Some could play the guitar. Others liked music.”

He said, “My father always wanted to have a priest and a doctor among his sons but out of the nine of us, none became a priest or doctor. Some brothers are not writers but they are good storytellers with an amazing memory for detail: Marquitos can talk about his adventures as barrio captain of Wack Wack; Francisco or Pipo, 96, who used to run a bar called Omar Khayyam in Ermita and still drives a car in Los Angeles.”

Roces remembered Sunday lunches at the family abode on Taft Avenue and Remedios beside the Masonic Temple before it was totally burned to the ground and destroyed during the Liberation. “There was a long table and the sons were arranged according to seniority. Pochero was served and by the time it reached me, the youngest, I was left with the vegetables, no more beef.”

In painting, Roces, one of founders of the Saturday Group of artists that used to hang out at Taza de Oro coffee shop, said he likes to experiment with new media. I’m happy the Saturday Group is still alive, but it’s a different generation.”

These days he works on an iPad using an application called Brushes Redux. If bored in Manila traffic, he brings out the iPad and works on, say, a portrait of the driver. “The interesting thing about digital art is you can print any size, you can even print the image on canvas. I find it an interesting challenge. Erasing is easier. I can blow up the image. It documents itself step by step. I can work on it even with people around me. The medium offers new surprises.

“What I like to do now is to pick the minds of people—what makes them see certain things that I see there. For example, the President says something against the Church and the Catholics aren’t even offended. In the past what he’s been saying would have been taboo, now some people find what he’s saying charming.”

He once got a memo from The Manila Times board telling him to refrain from using the words “hell” and “damn” although these were used in common language.

He feels the coming of age only “in the physical sense like I need a hearing aid and I’m not as young as I feel. I have an age-related disease, macular degeneration, requiring injections in the right eye. I am legally blind—the left eye is lost. The injections are needed every six weeks to prevent the condition from getting worse. I’m willing to take injections to keep the good eye going since I depend on it for my writing and painting.

He added, “Forgetfulness is more common. I must take down notes to remember.”

Writing projects include a war memoir of his father to be called “Batangas Diary,” his own memoir, research on two American artists who did war sketches for Harper’s Magazine during the Filipino-American War, and a sequel to “Adios, Patria Adorada,” a work in which he wrote that the country still had a long way to go.—CONTRIBUTED