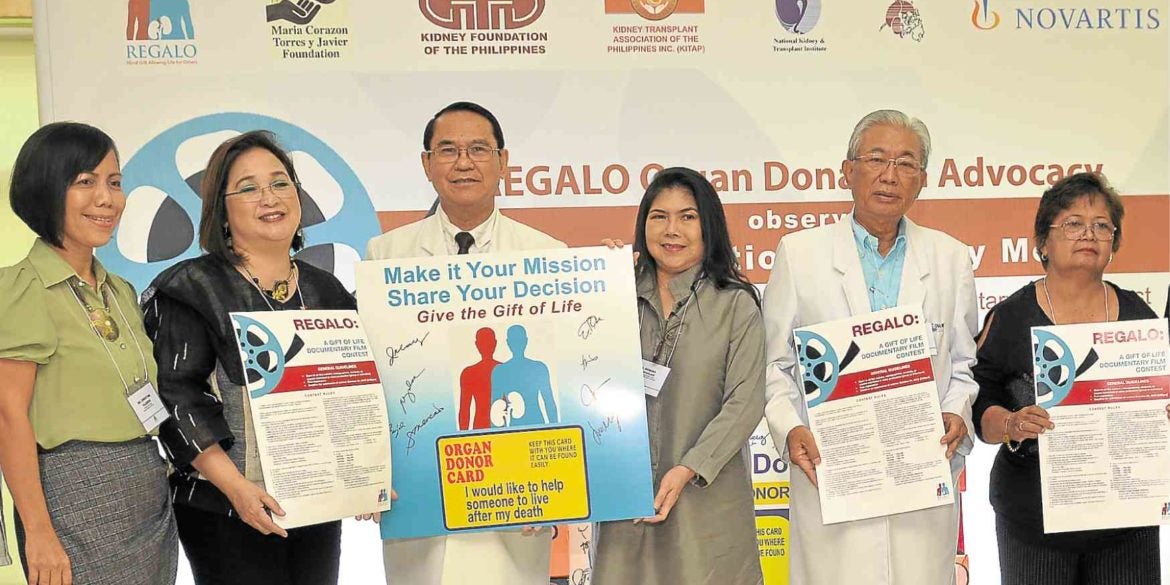 Kidney transplants, in particular, can save lives, and a documentary film contest hopes to spread that message

A short-documentary film contest has been launched to encourage more Filipinos to become organ donors. The five-minute films must focus on stories of real people who have benefited from organ donations.

The contest, “A Gift of Life,” organized by the Renal Gift Allowing Life for Others (Regalo), is open to filmmakers, videographers, students, and film enthusiasts. It can be a testimonial or a story of a recipient or donor.

Only one entry per group/participant is allowed.

Entries should be in digital form (minimum resolution 720 x 480) and must include scripts in English, Filipino or Cebuano. The grand winner will receive P50,000; second prize is P30,000; and third prize is P15,000. Deadline for submission is Oct. 4. Complete contest rules can be viewed on the Regalo Organ Donation Advocacy Facebook page.

Diabetes and hypertension are still the leading causes of kidney failure today.

“They get a new lease on life through a transplant,” said Dr. Rose Marie Rosete-Liquete, executive director of the National Kidney Transplant Institute (NKTI). “A kidney transplant has more benefits, and has been proven to extend life. We don’t need our organs when we go to heaven or elsewhere. Let’s leave them behind for those who need them most.”

Liquete says Filipinos should start signing organ donor cards and bringing those cards at all times. More importantly, people must inform their families that they want to become organ donors.

Kidney disease is not a disease of a single person—it burdens the entire family. Dialysis is the second highest payout of PhilHealth, said Dr. Susan Pineda Mercado, special envoy of the president for global health initiatives.

“We will all die someday. Your decision to donate organs must be made while you’re alive, and, not when you’re sick because then it will become a very sensitive issue,” Mercado said.

Mercado said that countries like Spain and Austria have the highest number of donors because of their opt-out system. If they don’t want to donate, they carry a card. Those who do not carry cards will automatically have their organs harvested.

In the Philippines, dialysis has become the standard treatment for kidney disease. Unfortunately, only about 10 percent of dialysis patients can return to work. Compare that to transplant patients who can work again and live full, productive lives like regular people.

“Instead of 500 transplants a year, in the Philippines, with its recorded number of patients on dialysis—most likely an underestimation—we need to perform 100 transplants a day. That should be the public health goal,” Mercado said.

“Documentaries are powerful tools that can educate and motivate people to do good,” said Ben “M7” Yalung, founder of the Asia Pacific Film Institute.