This Ilonggo-style ‘adobo’ is never pale nor brown | Inquirer Lifestyle 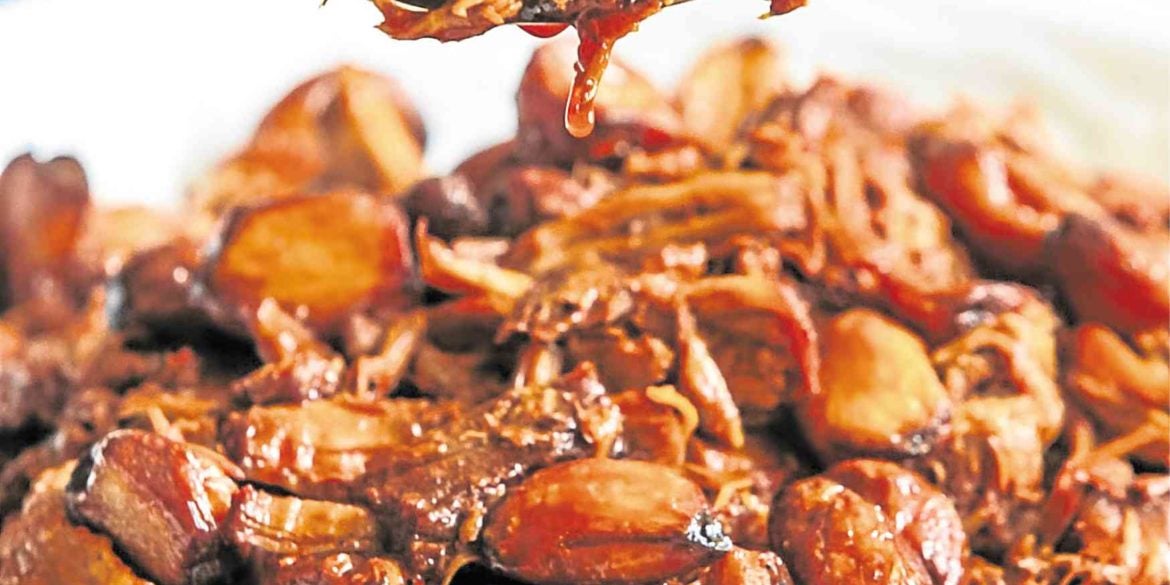 This Ilonggo-style ‘adobo’ is never pale nor brown

Inez Gamboa lets her adobo simmer for more than two, or sometimes, four hours, until the meat turns into shreds. She fries them separately before putting them back into the sauce.

The chicken and pork are simmered in cane vinegar, soy sauce, atsuete oil, and tons of garlic. The addition of atsuete oil in this Ilonggo version of adobo gives the dish not only a pleasant orange hue but also a delicate earthy taste.

It’s her Lola Carmen S. Vargas’ recipe. “It’s a staple in our family,” says Gamboa, 38. “I grew up eating this adobo with atsuete. I don’t know any other kind of adobo. That’s why, when I look at other versions of adobo, I find them so pale and brown. Ours is orange and the oil really seeps out from the meat.”

For the pork, she uses kasim (picnic) or pigue (ham) because it has more fat. In chicken, she opts for pitso (breast).

“My lola would even make the pork super tostado (toasted) before putting them back in the sauce,” Gamboa says. “The flavor is so intense, yet so simple and familiar.”

When serving, she pairs the salty and mildly sour chicken and pork adobo with kansi, another popular Ilonggo soup dish with beef bone marrow and vegetables.

Like her grandmother who was from Bacolod City, Gamboa is used to making huge batches of adobo even for her small family of five—hubby Noel and children ages 6, 4, and one.

But nothing goes to waste. Leftover adobo is turned into adobo flying saucer sandwich.

“We make our leftover adobo into a sandwich,” says Gamboa. “Using a flying saucer cooker, we slice the bun, fill it with the adobo meat and press down each bun to flatten and cook.” The sandwich comes out nice and crusty.

Gamboa started cooking at a young age, but it was baking that caught her fancy. Her parents would send her to various baking classes, including The Maya Kitchen.

She has a communications technology degree from Ateneo de Manila University, and took her masters in management at the University of Asia and the Pacific. Then she studied culinary at the Center for Asian Culinary Studies.

She is the general manager of the family business, the Vargas Kitchen or VK. She runs it with her two siblings, Miko and Martina.

VK became a corporation in 2007, from a home-based business formed 38 years ago by Gamboa’s grandmother.

Not intending to turn it into a business, her lola would simply give her yummy cakes to friends as gifts, starting with her famous butter cake. It became so popular that two of her daughters—Teresa, Gamboa’s mom and Nena (Tantoco)—decided to sell the cakes.

From the original offerings of butter cake, brazo de mercedes and chocolate ice box cake, now they have a wider selection of cakes in different flavors using butter cake as base, as well as savory offerings like the bottled adobo and bacalao.

“We started selling only the cakes, but since our family also enjoyed the food lola always served at Sunday lunches, her dishes were also introduced into the mix,” says Gamboa.

Boil the chicken and pork in the soy sauce and vinegar mixture. Reduce to a simmer after 20 minutes. Add the garlic and let it boil. Then, simmer until pork and chicken are fork tender. Add atsuete oil.

In a separate pan, fry the pork and chicken. Return the fried pork and chicken back into their sauce. Let it simmer for a few minutes. You can fry another batch of garlic from the used oil for garnish.