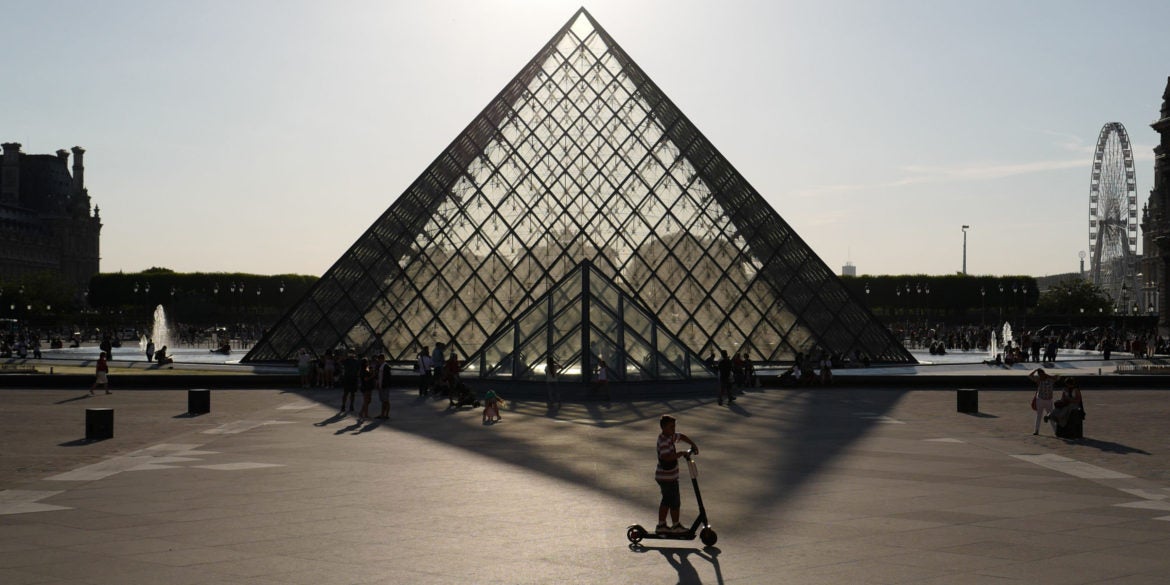 A boy rides an electric scooter in front of the Pyramid of The Louvre Museum (Pyramide du Louvre) as the sun sets in Paris on July 3, 2019. (Photo by Ludovic MARIN / AFP)

The Louvre museum in Paris has removed the name of the Sackler family from one of its wings, amid a controversy that has seen the billionaire donors accused of pushing a highly-addictive opioid blamed for tens of thousands of deaths.

An AFP reporter on Wednesday saw that masking tape had been put in place to hide the Sackler name on plaques in the rooms of what had been the Sackler Wing of Oriental Antiquities, which houses artefacts from the ancient Near East.

A museum spokesperson could not say when the tape had been put in place. The wing had been given the name due to a $3.6 million donation made by the Sackler family in 1996.

Louvre president Jean-Luc Martinez said on RTL television on Tuesday that the rooms no longer carried the name as such a tribute lasted a maximum of 20 years after the donation.

This would mean that the Sackler wing should not have been named after the family for several years. But the Louvre spokesperson declined to comment when asked why the name had not been removed three years ago.

The Louvre was the latest in a string of museums to face criticism over links to the Sackler family and their company Purdue Pharma, whose painkiller OxyContin is now subject to more than 1,000 lawsuits over its role in the US opioid crisis.

In recent months, galleries including New York’s Guggenheim and Metropolitan Museum, and London’s Tate and National Portrait Gallery, said they would stop accepting donations from the family.

But the Louvre is believed to be the first to actually remove the name, a move welcomed by a PAIN spokesperson while noting that the museum appeared unwilling to publicise it.

In 2017, 47,000 people died in the United States as a result of overdosing on opioids including prescription drugs, heroin and fentanyl, the Centers for Disease Control says.

There are hundreds of lawsuits in various US states against both Purdue and its owner the Sackler family, who are accused of pushing for the prescription of OxyContin despite knowing how addictive it is.

But worries about the medication are not confined to the US.

Last month, around 100 French doctors warned about the risk of a health crisis claiming there were “12 million people in France taking opioids” who had not been told about the potential for addiction and risk of overdose.