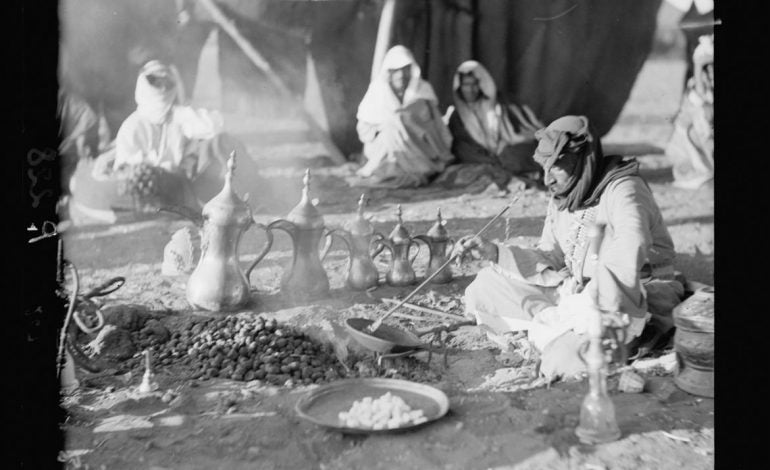 A Bedouin sheikh (head of the nomadic tribe) roasting coffee next to his tent to welcome his guests. Photo: Library of Congress./The Star/Asia News Network

Have a cuppa coffee history at the Islamic Arts Museum Malaysia

KUALA LUMPUR — How many people around the world start their mornings with a cup of coffee – or three? But did you know that this much-loved beverage has courted its fair share of conflict and controversy in history?

For instance, coffee was once called The Satan’s Drink.

In 1633, the Ottoman Sultan Murad IV imposed a death penalty for those caught consuming the bitter brew in public. According to some accounts, he prowled the streets of Istanbul (in disguise); those found drinking coffee would be decapitated with his trusty broadsword.

Coffee houses proved to be so popular in 17th century England that men were deemed to be spending too much time there, prompting the Women’s Petition Against Coffee.

It was claimed that the “bewitching effects of this most pernicious coffee” was responsible for the men’s lack of sexual prowess in the bedroom.

In the late 18th century, Prussia’s King Frederick II was said to have issued a manifesto to ban consumption of coffee and encouraged his subjects to drink beer instead. He believed that coffee-drinking soldiers could not be depended upon to endure the hardship of war.

No doubt, it is not difficult to imagine that some artistic liberties have been taken with these stories over time – but they are nonetheless rather amusing.

These anecdotes and more, can be found at The Story Of Coffee exhibition at the Islamic Arts Museum Malaysia (IAMM) in Kuala Lumpur.

Located at its Open Space Gallery, the exhibition takes up a modest area, but is packed with interesting facts, stories and images revolving around coffee and its colourful, often tumultuous, history.

“The exhibition was inspired by looking at the world’s most favoured drink, coffee, and how it played an important part in the early history of the Muslim world. This exhibition is also an effort to enliven the intangible cultural heritage of the Muslims who are known for their culture and hospitality, especially in receiving guests,” says Nor Adeena.

No artefacts are on display here, but you will be able to see photographs of items from the museum’s collection, such as a brass Sarajevo coffee grinder, a pair of Spanish pestle and mortar, an Egyptian silver coffee pot (or dallah) and a painting by American artist Edwin Lord Weeks.

Vintage posters and drawings round up the display.

Coffee was said to be first discovered in Ethiopia in the 11th century when a goatherd observed his goats prancing and bleating excitedly after chewing on bright red berries growing on the nearby bushes. He tried a few of the berries himself, was overcome by a sense of elation, and at the suggestion of his wife, took the berries to the monastery.

The chief monk listened to his account of their miraculous effect and exclaimed that it must be the work of the devil, and flung the berries into the fire.

“Within minutes, the monastery filled with the aroma of roasting beans, and the other monks gathered to investigate. The beans were raked from the fire and crushed to extinguish the embers. The chief monk ordered the grains to be placed in the ewer and covered with hot water to preserve their goodness. That night, the monks sat up drinking the rich fragrant brew, and vowed that they would drink it daily to keep them awake during their long, nocturnal devotions,” relates Nor Adeena.

She added that while this popular account provides a religious approval for the drinking of roasted coffee berries, it is believed that Ethiopian monks were already chewing the berries as a stimulant for centuries before it was brewed.

“Ethiopian records establish that Ethiopian and Sudanese traders who travelled to Yemen over 600 years ago chewed the berries en route to their destination to survive the harsh and difficult journey. Residents of Kaffa, as well as other ethnic groups such as the Oromo, were also familiar with coffee. They mixed ground coffee with butter, and consumed them for sustenance. This practice of mixing ground coffee beans with ghee (clarified butter) to give it a distinctive, buttery flavour persists to this day in parts of Kaffa and Sidamo, two of the principal coffee producing regions of Ethiopia,” she explains.

The exhibition also shines the spotlight on the early history of coffee in the Muslim world, including its role in culture, trade and hospitality. Here, you can delve into the coffee rituals and traditions in Ethiopia, Turkey and Egypt and find out how they use this beverage to honour their guests.

“The exhibition highlights the significance of the Muslim pilgrimage and the ports that played an important role in the spread of coffee.

“Traditionally, Muslim pilgrims around the world who met in Mecca (Saudi Arabia) would exchange gifts, which included coffee, upon returning home. We also cover the popularity of coffee drinking by the Sufis, who drank coffee to keep them awake and alert during their long and often rigorous ceremonies,” says Hariz.

In conjunction with The Story Of Coffee, there will be a coffee painting and coffee beauty workshop in August, with creative workshops and coffee-tasting sessions to follow in the coming months.