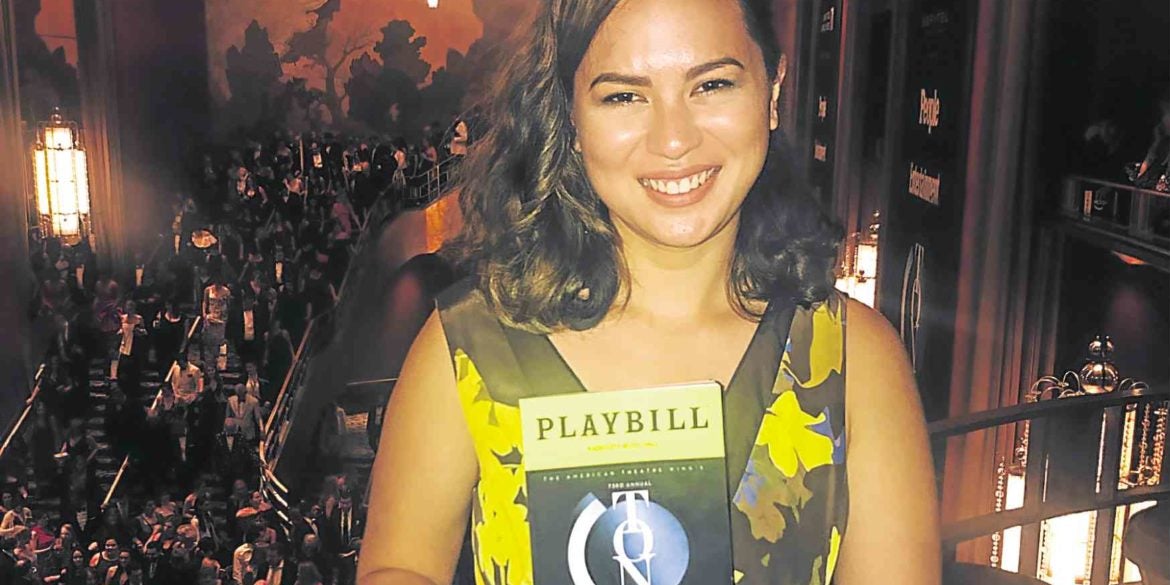 “Whether this would be a once-in-a-lifetime opportunity or the first of many Tony Awards, I took it seriously and wanted to look my best,” says the author.

My first Tony Awards: Still holding on to the dream

During commercial, James Corden brought out his karaoke songbook and made the actors sing, telling the live audience—‘For your eyes only! You lucky, lucky things!’

But for Broadway fanatics and performers alike, the 73rd Annual Tony Awards was the equivalent of Super Bowl with a longer half-time show.

Personally, it was my first time to watch the Tonys not from a friend’s couch but with the live audience at Radio City Music Hall.

For one Sunday each year, the Broadway community comes together to celebrate the best of the season at the Tonys.

In my past four years of living in New York, I’ve wanted to join the festivities, whether it meant just waiting outside the theater with friends, or trying to find dress rehearsal tickets, or even applying as seat filler.

So, when the Tony Awards announced it would release limited rush tickets (heavily discounted) before the awards show, I decided to try. Arriving at the box office mid-afternoon, I wasn’t expecting to be only the 10th person in line. When I got the tickets, I didn’t know whether to laugh, cry, or faint.

I called my cousins, Gaby and Bea, to come over and help me pick out a dress from my closet, and makeup artist Jamie Ozamiz. Whether this would be a once-in-a-lifetime opportunity or the first of many Tony Awards, I took it seriously and wanted to look my best.

On Tony Sunday, there was a cluster of police officers, lost tourists, and excited fans waiting outside Radio City Music Hall. When I saw the fans at the barricades, I nudged my Tony date, my friend and agent, Alexandra Byrd, and reminded her, “We were out there a few years ago!”

Inside was just as crowded, with guests trying to find their seats. The entire lobby smelled like a Sephora.

An hour before the live broadcast was The Creative Arts Awards, cohosted by the lead cast of the upcoming musical “Moulin Rouge.”

At precisely 8 p.m., the lights dimmed and the audience erupted in cheers and whistles.

Corden—best known for hosting “The Late, Late Show” and for the viral “Carpool Karaoke”—has hosted the Tony Awards before. He has also won a Tony for Best Lead Actor in a Play for “One Man, Two Guvnors,” in 2012.

Corden went on “The Daily Show with Trevor Noah” to talk about why he wanted to host the Tony Awards a second time. “When you’re doing a play or a musical eight times a week, with one day off, that is an absolute craft,” Corden told Noah. “The reason I wanted to host the Tonys and the reason I really wanted to try and make it the best show I can, is because I believe that per square meter, there is no room on Earth that holds as many talented people as [Radio City Music Hall] does. [The Tonys] is a show where you want to celebrate these people who are so gifted and so talented.”

Despite what the ratings say, I think Corden’s genuine love of theater is what made the Tonys so much fun, and which is also why I lost my voice from cheering and laughing. His show-stopping 10-minute opening number brought the house down and got a standing ovation.

During commercial, he brought out his karaoke songbook and made guests sing. He got Ben Platt to sing “Tomorrow” from “Annie,” Anthony Ramos and Chris Jackson to rap “96,000” from “In the Heights,” and Billy Porter to belt out “Everything’s Coming Up Roses” from “Gypsy.”

I was in the bathroom when Porter began his number, and I sprinted back to my seat to watch him strut onstage for his big finale. The audience went wild as Corden yelled, “For your eyes only! You lucky, lucky things!”

With rush tickets, you accept that you get random seats. I got the tickets that let us sit in the first mezzanine, next to the aisle, and most importantly, on the side where the ladies’ room was, so we didn’t climb over seats or sequins to get to the toilet.

We were seated amid producers, relatives and students, all of whom provided a variety of reactions as the evening progressed. Some producers politely clapped if their show didn’t win while other students whooped and cheered regardless. Overall, it was a supportive atmosphere—we leaped to our feet to give multiple standing ovations to the winners, especially when Judith Light, Andre de Shields and Ali Stroker came onstage.

By the time the show came to an end, it was past 11 and people had been there for nearly five hours. The only ones who hung around were the students who came down from our mezzanine seats to the orchestra level for a chance to meet some of the Broadway stars who haven’t left for the after parties.

As the clock struck midnight, Alexandra and I found ourselves on the subway, in our gowns. Back home, I sat on my couch still fully dressed, to try and hold on to the dream that was the Tony Awards. The longer I sat in denial, the sooner Monday crept in, as if to say, let’s get on with the show. —CONTRIBUTED