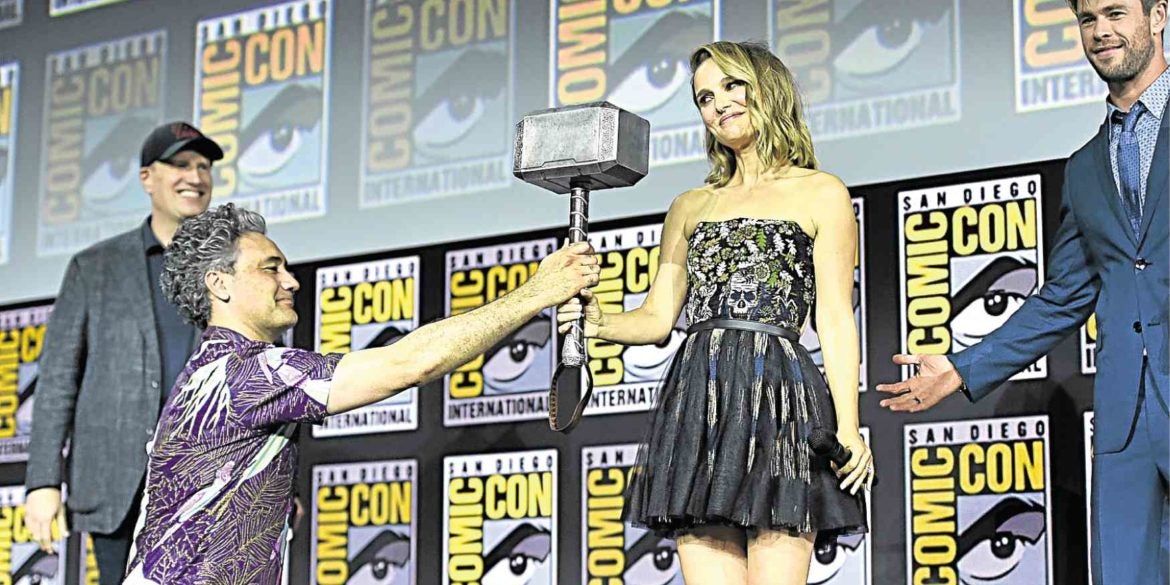 During the run-up to “Avengers: Endgame,” Marvel Studios head Kevin Feige said there would be no announcements of movies or release dates until after the release of “Spider-Man: Far From Home” in July. “Spider-Man: Far From Home,” the 23rd film in the MCU, closed out the MCU’s Phase Three, so all movies after it would be part of Phase 4, what Feige had previously referred to as the fourth book in the MCU story.

“Spider-Man: Far From Home” has come and conquered, so Feige kept his promise by announcing the Phase 4 slate at the Marvel Studios panel in Hall H, the sanctum sanctorum of SDCC.

The announced slate starts as soon as May 2020 and stretches all the way to the end of 2021. It includes feature films as well as series on the Disney streaming service Disney+, which will begin operation before year’s end.

The Disney+ connection is important, because Disney is moving its movies to the platform from services such as Netflix. This means that Marvel intends to do all its TV on Disney+.

This announcement comes at a time when “Avengers: Endgame” became the biggest movie in history after finally overcoming the box office behemoth that was 2009’s “Avatar.” These new films come after the end of the Avengers Infinity Saga—leaving Marvel Zombies hungry for what comes next.

As expected, Feige confirmed three expected sequels—“Black Panther 2,” “Guardians of the Galaxy Vol.3” and “Captain Marvel 2”—that we had been expecting all along. Considering the powerful box office of both the first “Black Panther” and “Captain Marvel” films, it was only a matter of time before the sequels were announced. No release dates were given.

The most interesting omission in the announcement of sequels is what should be the biggest MCU film in the post-Avengers age: the third Spider-Man film. It was clear after “Spider-Man: Far From Home” obliterated the opposition that Marvel was positioning Tom Holland as the face of Phase 4. Expect this film to be announced within the year.

After Disney completed its acquisition of all of Twentieth Century Fox’s assets, it was also just a matter of time before Marvel announced what it was doing with the two major Marvel Comics properties Fox still had. At SDCC, Feige confirmed that a “Fantastic Four” movie is coming along with a film currently called “Mutants” that will introduce the X-Men to the MCU. Yes, this means Wolverine and Deadpool are officially joining the MCU, something fans have been clamoring for since the MCU came into being. No additional details or release dates were given.

For anyone who missed the bromance between Falcon (Anthony Mackie) and Winter Soldier (Sebastian Stan) that started in 2014’s “Captain America: The Winter Soldier,” then Marvel has your back with the first original MCU series airing on Disney+. This should be a funny but tight spy show with interesting ramifications considering Falcon received Captain America’s (Chris Evans) shield at the end of “Endgame.”

The six-episode series will see the return of Daniel Bruhl’s Zemo and Emily Van Camp’s Sharon Carter. This is an important show as it will be our first taste of the new MCU TV universe.

A most unusual choice that’s been gifted with a most impressive cast, “Eternals” is about an immortal race of aliens who came to the Earth and manipulated humanity and history. The Eternals were a fantastic creation by Jack Kirby in 1976 and received a reboot written by Neil Gaiman in 2006. The Eternals have mythological connections as they were mistaken by humans as gods. Chinese director Chloe Zhao will be in charge of the single most impressive non-Avengers cast in the MCU. Richard Madden (Rob Stark from HBO’s “Game of Thrones,” the King in the North!) will be Ikaris. This film also cast the MCU’s first deaf actor, Lauren Ridloff, as the speedster Makkari. The Salma Hayek is the Eternals’ leader Ajak. The biggest get is the one and only Angelina Jolie as Thena. We will see it soon—late next year—and can’t wait to see what Marvel Studios will do with such an outsize psychedelic property. This is the most gloriously nerdy project here.

Everyone will get the first Asian actor in the lead role when “Shang-Chi” arrives. Chinese star Simu Liu, most famously Jung from the TV show “Kim’s Convenience,” is the landmark Asian lead. Comedian Awkafina (“Oceans 8”) is in it, with Hong Kong superstar Tony Leung playing the real (not the Ben Kingsley fake in “Iron Man 3”) Mandarin. This brings a classic Marvel villain (with the “ten rings” in the movie’s title) fully to the screen; it also presents a hero who has been considerably updated from his more stereotypical origins. It will be directed by “The Glass Castle” director Destin Daniel Cretton.

Perhaps the most unusual of all the Phase Four announced properties, “WandaVision” is a Disney+ series featuring the romantic pairing of Scarlet Witch (Elizabeth Olsen) and the Vision (Paul Bettany). Not much is known about this show, though Scarlet Witch and the Vision have a very long and complicated history in the comic books.

Stephen Strange’s (Benedict Cumberbatch) appearances in the 2016 “Doctor Strange” movie and two “Avengers” films have turned the magic user into a fan favorite, and the first movie’s director Scott Derrickson returns to helm the sequel. Elizabeth Olsen’s Scarlet Witch has been confirmed to be appearing as well. Strange’s nature as a character means Marvel Studios can explore such a broad realm of realms and the “Multiverse” in the title means the exploration of different alternate dimensions may be coming.

It’s easy to forget that Loki began as a villain in 2011’s “Thor,” but Tom Hiddleston’s charisma has turned the Asgardian into a fan favorite regardless of which side he’s on. “Endgame” has given Marvel a justification for Loki to be kicking around even though he kicked the bucket at the beginning of “Avengers: Infinity War.” This means that Hiddleston, always a crowd pleaser at SDCC, will be skulking his way into television courtesy of Disney+.

Clearly the most ambitious of the Disney+ shows, “What If…?” is of course an adaptation of the iconic Marvel Comics series which shows alternate realities, hence the title. That book was a real trip, and this show should be as well. This is an animated show and will bring back basically everyone already in the MCU to voice their respective characters. Jeffrey Wright (HBO’s “Westworld”) will voice the series narrator, the Watcher. The first episode is rumored to be “What if Agent Carter was Captain America?,” which will have Agent Carter (voiced by Hayley Atwell) picking up the shield instead. Imagine the possibilities.

Like his teammates Scarlet Witch and the Vision, the Avengers archer Hawkeye (Jeremy Renner) gets his own Disney+ show, following his post “Endgame” adventures. This show will most likely be of the same vein as the Netflix “street-level” shows and will mostly be adapted from Matt Fraction’s critically acclaimed 2012 take. It already has a big plus with the hugely popular Renner and promises the onscreen debut of that other famous Hawkeye, Kate Bishop.

Thor gets a surprise fourth movie! Last seen with the Guardians of the Galaxy at the end of “Endgame,” Thor (Chris Hemsworth) gets the hammer back on after the genre- bending smash that was “Thor: Ragnarok” in 2017. Marvel is now clearly going in that direction, which means Thor gets more films. Thor, after all, is the only one left standing of the original Big Three of the MCU (Iron Man and Captain America being the other two). “Thor: Ragnarok” director Taika Waititi also returns together with Valkyrie (Tessa Thompson). The really big reveal was the return of Natalie Portman as Jane Foster, and with Waititi literally handing Mjölnir to Portman on the Hall H stage, it became clear that the Jane Foster Thor—Goddess of Thunder—will be appearing in the film. Foster was actually Thor in the comics starting in 2014 when Odinson lost his worthiness to wield the hammer. Ironically, Foster in the comics is actually currently the wielder of the Valkyrie mantle. The offbeat subtitle hints at the romantic elements of the film. Valkyrie was named King of Asgard (now on Earth) after “Endgame,” and Feige confirmed Valkyrie will be an LGBTQ+ character with her own romantic interests in this movie. This trio of Hemsworth, Thompson and Portman exemplify the mix of old and new, the expected and the unexpected, that came with the announcement of the Marvel Phase Four films.

Feige had one last surprise for Hall H. When all the talent present came back on stage, Feige made one last announcement. Academy Award-winning actor Mahershala Ali (“Moonlight”) came on stage. Then the screen behind him changed: “Blade.” Ali will indeed be portraying the vampire hunter in an upcoming MCU film. Blade, created by Marv Wolfman and Gene Colan in 1973, is hugely important to the MCU as the 1998 Wesley Snipes film was the first real cinematic success for Marvel—it would spawn two sequels. It paved the way for the MCU as it was conceived.