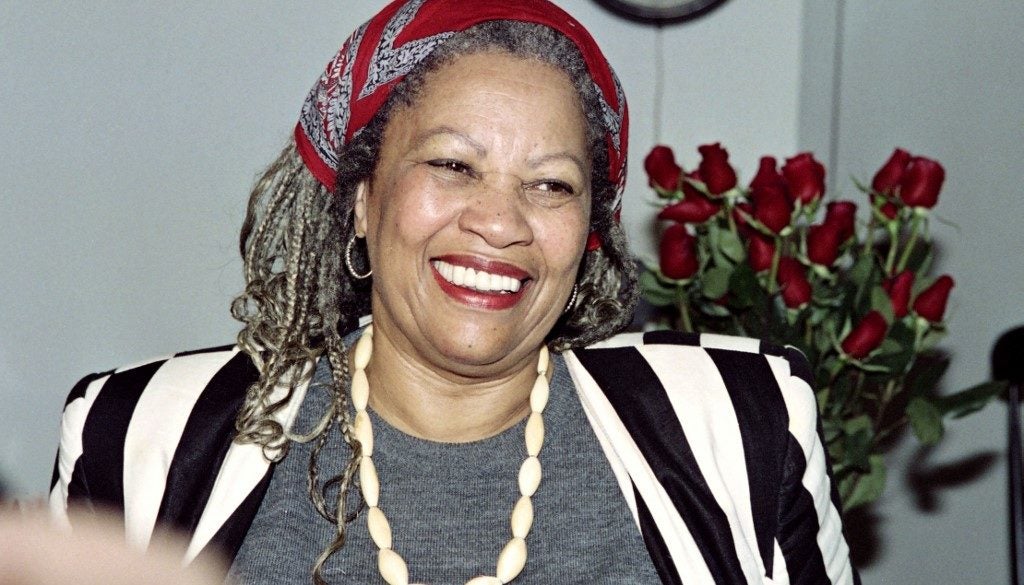 (FILES) In this file photo taken on October 7, 1993 US author Toni Morrison smiles in her office at Princeton University in New Jersey, while being interviewed by reporters. - Toni Morrison, the first African American woman to win the Nobel Prize for Literature, has died following a short illness, her family said in a statement on August 6, 2019. She was 88. "Although her passing represents a tremendous loss, we are grateful she had a long, well lived life," they said. (Photo by Don EMMERT / AFP)

Toni Morrison, the first African-American woman to win the Nobel Prize for Literature and one of America’s best loved writers, has died following a brief illness, her family said in a statement Tuesday. She was 88.

Barack Obama — who awarded Morrison the Presidential Medal of Freedom — led the tributes, describing her as “a national treasure, as good a storyteller, as captivating, in person as she was on the page.”

“Her writing was a beautiful, meaningful challenge to our conscience and our moral imagination. What a gift to breathe the same air as her, if only for a while,” the former US president wrote on Twitter.

Morrison wrote 11 novels, many of them touching on life as a black American, in a glittering literary and award-laden career that lasted over six decades.

She also penned numerous essays, poems and speeches and was often referred to as America’s “conscience” for her poignant takes on race and human rights, never afraid of commenting on the day’s weightiest political issues.

Her family said she “passed away peacefully” in a New York hospital on Monday night “surrounded by family and friends.”

“Although her passing represents a tremendous loss, we are grateful she had a long, well lived life,” they said in a statement, describing her as “the consummate writer who treasured the written word.”

Morrison won the Pulitzer Prize and the American Book Award in 1988 for her 1987 novel “Beloved.” Set after the American Civil War in the 1860s, the story centered on a slave who escaped Kentucky to the free state of Ohio.

The book was later turned into a film starring Danny Glover and Oprah Winfrey.

Morrison received numerous other accolades including the Nobel Prize for Literature in 1993.

In 1996, she was honored with the National Book Foundation’s Medal of Distinguished Contribution to American Letters.

In 2012, Obama presented her with the Presidential Medal of Freedom and in 2016 she received the PEN/Saul Bellow Award for Achievement in American Fiction.

“She was a great woman and a great writer, and I don’t know which I will miss more,” Robert Gottlieb, Morrison’s longtime editor at Knopf publishers, said in a statement sent to AFP.

Sonny Mehta, chairman of Knopf, said he could “think of few writers in American letters who wrote with more humanity or with more love for language than Toni.”

“Her narratives and mesmerizing prose have made an indelible mark on our culture. Her novels command and demand our attention. They are canonical works, and more importantly, they are books that remain beloved by readers,” he said.

She followed up with “Sula” in 1973, going on to publish another nine novels, including the acclaimed “Song of Solomon” in 1977 which won the National Book Critics Circle Award.

Her writings touched many, including Obama who recalled reading “Song of Solomon” as a child “and not just trying to figure out how to write, but also how to be and how to think.”

Kamala Harris, a candidate for the Democratic presidential nomination, said America had lost one of its “greatest voices and storytellers.”

“Her work gave us power, hope & freedom. While our world shines a little less bright today, we know ‘something that is loved is never lost,'” she tweeted, referencing a quote of Morrison’s.

Morrison also worked as an editor at Random House and taught at Princeton University.

Her life was touched by tragedy. In 2010 her son Slade died of pancreatic cancer aged just 45.