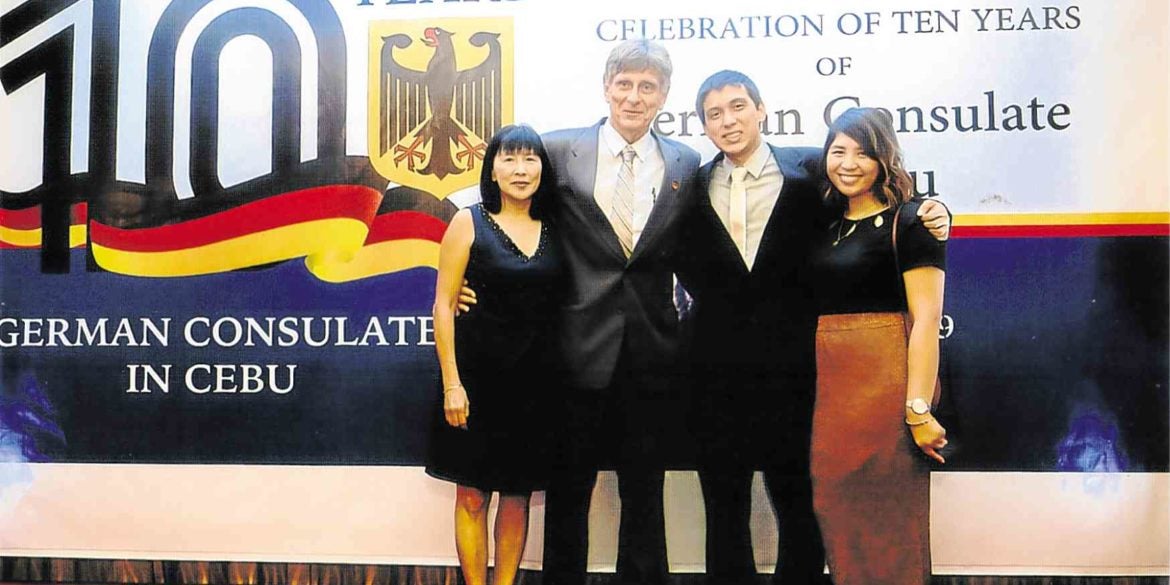 The Seidenschwarz family, from left: Elizabeth and Dr. Franz with their son Dr. Franz Jr. and his wife Dr. Melanie

German Ambassador to the Philippines Dr. Gordon Kricke came to Cebu to preside over the 10th anniversary of Germany’s honorary consulate. The celebration was held at the Manila Room of the Marco Polo Plaza Hotel.

Receiving the prominent guests at the reception line and introducing them was Dr. Franz Seidenschwarz, German honorary consul in Cebu for the past decade.

Helping him entertain the guests were his Cebuana wife Elizabeth Cinco Seidenschwarz, as well as their son Dr. Franz Seidenschwarz Jr. and his wife Dr. Melanie Seidenschwarz. Another son Alex, is in the United States.

In his speech, Ambassador Kricke praised Dr. Franz for his abnegation and dedication in taking care of the German community. “In Cebu, there are probably 4,000 German citizens,” said Kricke. “To offer them consular service is one of the consulate’s most important tasks.”

He pointed out that the Philippines is Germany’s most important trade partner in Europe: “Specially Cebu. It is a very promising destination for German investment and trade.”

He mentioned that Dr. Seidenschwarz has been living in Cebu since 1987 as a professor and consultant at the University of San Carlos in Cebu. “In 1994, he published a book, ‘Plant World of the Philippines,’ based on extensive scientific studies.”

The ambassador revealed that in 2000, Dr. Seidenschwarz discovered a rare dragonfly in a mountain forest in Cebu. It’s been named after him, the Risiocnemis Seidenschwarzi. “Unfortunately, it is threatened with extinction due to the shrinking forest cover.”

Among the guests were Cebu Marco Polo’s general manager Brian Connelly and resident manager Michaela Preisner, who the next day left for a two-week vacation in Salzburg, Austria, to spend precious time with her parents and other family members.

Belgium’s honorary consul emeritus Enrique Benedicto was likewise present, and together with his son Enrison who has succeeded him, planned the celebration of the National Day of Belgium.

That was a lively dinner at The Pig & Palm hosted by Conrad Manila general manager Laurent Boisdron and commercial director Michael Albaña.

They had come to Cebu to participate at the 6th International Travel Festival in Ayala Center Cebu. It was a success with 166 booths offering huge discounts in hotel stays and airline destinations.

Boisdron and Albaña stayed at the Radisson Blu Cebu, where Laurent was GM until he accepted to head Conrad Manila.

The Pig & Palm that evening had run out of quality white wine, but Boisdron discovered that it has a red from Chinon, his hometown in France.

“It has to be good,” he said. And it was—smooth on the palate and perfect for clinking glasses. We lost count.