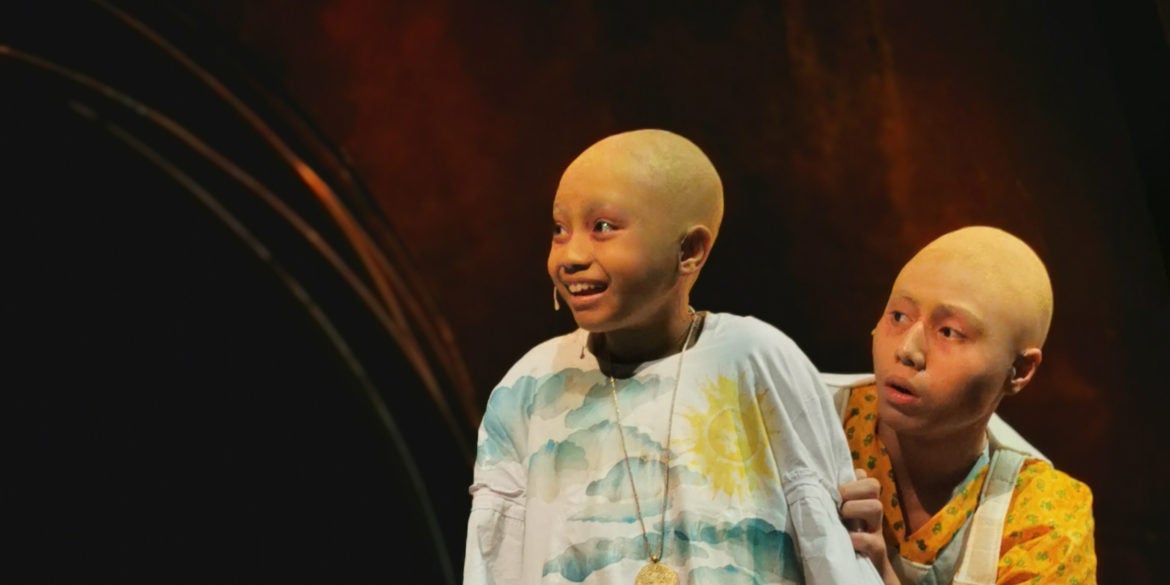 Watching a restaging of a play can be a double-edged experience for a viewer, particularly if the original version was a hauntingly memorable experience.

On the one hand, there is the possibly unreasonable expectation that the restaging matches or exceeds one’s memories in every respect; on the other hand, one’s familiarity with the material can be occasion for a different-angled or broader perspective.

The Sandbox Collective’s “Dani Girl,” a brave musical about a nine-year-old girl struggling to cope with a second bout of cancer, returns five years after its Philippine debut. It had two different incarnations that both bowled this reviewer over.

This restaging also marks the return of Toff de Venecia to stage direction, and, witnessing the flair with which he has mounted the same material with three markedly different stage designs while employing alternative casts, one can only hope the return is permanent.

This production is by far the most elaborate, its stage dominated by Faust Peneyra’s striking vortex evoking the fantasy dimensions into which Dani’s imagination (and her guardian angel) draw her, further enhanced by Miggy Panganiban’s suggestive lighting shifts and Joee Mejias’ “Star Wars”-like video projections.

A purist fan of the original staging may miss its sparer design’s challenge to the imagination, but the visual dramatics of the current version lend a whole new specificity to a child’s imagined world. A viewer with the benefit of the past stagings can only be appreciative of the versatility with which the exhilaration and poignancy of the story have been brought to life.

But the heart of the musical must lie in the four performers who invest the characters and their interactions with vibrancy, humor and heartbreak. Most of the original cast have returned to reprise their roles, but this reviewer attended a performance with a new, alternate cast—and is grateful for the opportunity.

Juliene Mendoza impressively juggles his dizzyingly multiple personae, from guardian angel to Mexican drug dealer (his quip about stereotyping Latino characters is priceless) to the embodiment of cancer; the conflation of his roles as guardian angel and cancer personified is chilling.

Pam Imperial is wonderful as the desperately brave mother, mingling love, grief and bewilderment; her song, “The Sun Still Rose,” is a lovely, if agonizing, high point.

Daniel Drilon as Marty, Dani’s fellow patient, can perhaps project more childlike vulnerability, but is nonetheless an affectingly humorous co-voyager into the realms of imagination, complementing Dani’s effervescence with his brand of space-age “practicality.”

And there’s Felicity Kyle Napuli. If the production had nothing else to remark on, it would still be a marvel to watch, if only for her incandescent performance. It is almost difficult to credit that so young an actress (all of 12 years old) can project so much talent, musical and dramatic; so much spunk and wit and heartbreak; so much, yes, charisma.

Napuli’s songs, whether the funny “My Hair” or the understated but unbearably poignant “Requiem for Mr. Fritz,” are indelibly rendered, and her throwaway lines like characterizing Marty’s Hodgkin’s disease as “sissy cancer” or her unexpected questioning of God, are delivered with breathtaking impact. She is the very embodiment of what the play stands for.

All this to say “Dani Girl”—a musical we had not heard of until five years ago, written by playwrights we still barely know anything about (Michael Kooman and Christopher Dimond)—remains among the most haunting plays we have watched.

It is, of course, about cancer—unlikely material for a musical, especially with a child victim at its core—but it is brilliantly imagined. (The final encounter with God does threaten to be cloying but manages to skirt that.)

Ultimately, however, it goes beyond cancer: It is about indomitability of spirit, in children and mothers, in the face of the hard-to-bear. The play’s promotion harps, to the point of cliché, on its being about hope, but it really is that. —CONTRIBUTED