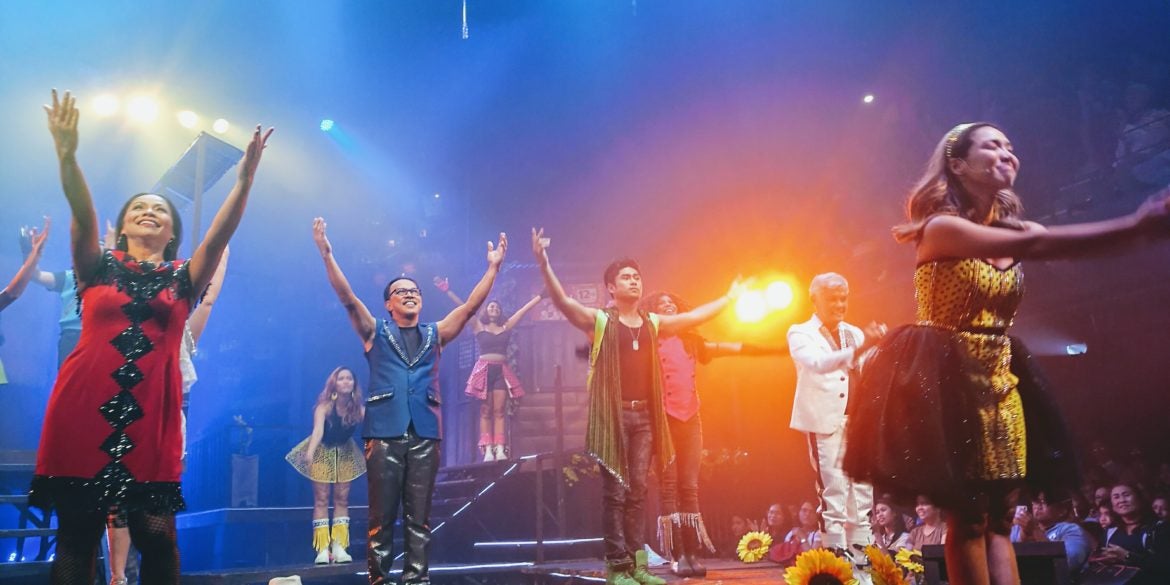 The show, which opened in 2014, had a spontaneous freshness and timeliness because the setting, Barangay Venezia, could be one’s own depressed, flooded neighborhood that survives on love, humor and, most of all, music.

Personally it brought back memories of my hometown, Malabon, notorious for its flooded streets and once dubbed by one of its famous sons, Nonoy Marcelo, as “Mala-Veniece.”

In “Rak…,” the trials and tribulations, as well as the hopes and dreams of the masses were depicted without being boring, especially with the backdrop of YouTube as a means to escape poverty.

“Rak…” shone with lots of brilliance—from the story and libretto (Maribel Legarda, Liza Magtoto), to the musical direction (Myke Salomon) to the actors (everyone in the cast, led that night by Aicelle Santos as Aileen, Bayang Barrios as Mary Jane, Noel Cabangon as Kiel, and Pepe Herrera as Tolits), and the main songs (originally by the band Aegis)—that it had the audience sitting in rapt attention like they were part of the action.

Double Dragon Plaza, a cluster of office and residential buildings on Edsa Extension near Mall of Asia, is teeming with Chinese BPO workers, but it also offers interesting food not found in your usual mall haunt.

At one corner sits Wok2Go, a Mongolian-type restaurant with a twist—its eight signature dishes come from other countries including Korea, Japan, India and the Philippines.

While the Mongolian style of choosing what food and add-ons go into your wok mix, there is another option of ordering specific dishes.

A standout is Pork Sinigang. The one at Wok2Go has no soup, but seems to taste better than the typical lutong-bahay recipe.

Kim Garcia, who put up Wok2Go with long-time friend Angie Mead King, swore the Sinigang uses natural ingredients. The business partners enjoy eating and cooking, but for Wok2Go, Garcia said he sought out the cooks of Victoria Court, the King-owned motel chain which he also manages.

The collaboration has produced wonderful results at Wok2Go.

On my second visit, I again ordered Sinigang, along with Pork Siomai, Soy Honey Garlic Chicken, Pepper Beef Broccoli, and San Miguel Pale Pilsen in can. The Sinigang had a consistent sour taste, but the other dishes were flavorful as well. For such a lot of food, and with beer to boot, the bill was a steal at P500.

I even took my family to turn them on to Wok2Go, especially my son who loves sinigang. On first bite, he gave the thumbs-up sign.

At first I was hesitant to try Pork Gochujang (red chili paste), but after relenting on my third visit, the Korean dish took my breath away.