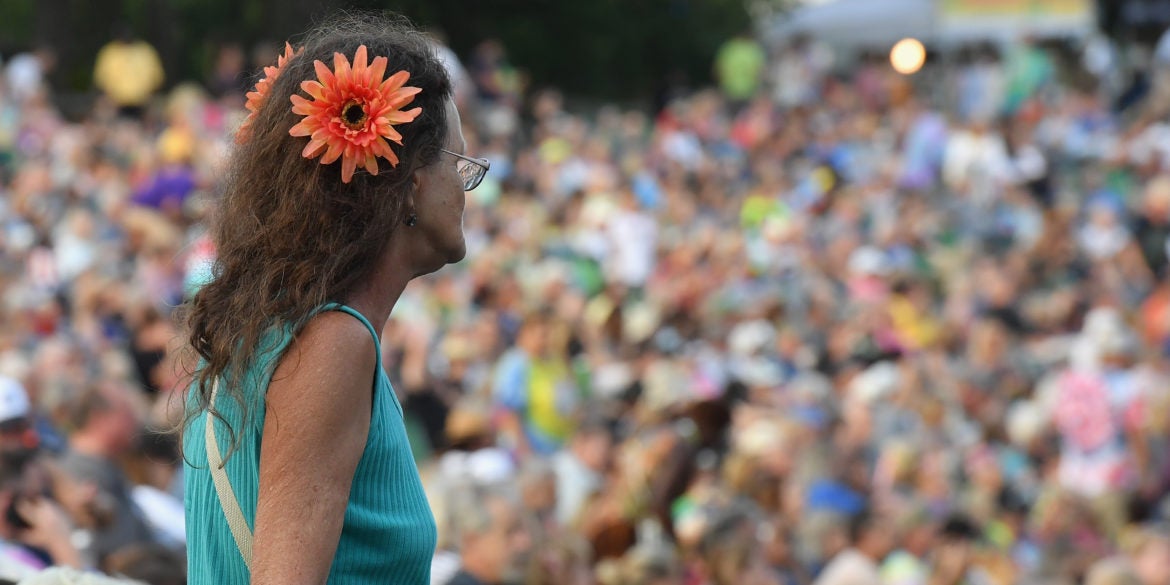 Guests attend the 50th anniversary celebration of Woodstock at Bethel Woods Center for the Arts on August 15, 2019 in Bethel, New York (Photo by Angela Weiss / AFP)

The Woodstock name has become more brand than spirit for many hippies, but people spanning the generations continue to seek its aura, looking for more “authentic” ways to pay homage to the spot where it all began.

People like visual artist and activist Christopher Peter Vanderessen shun “commercial” events like those held at Bethel Woods Center for the Arts, where the grounds that hosted the 1969 Woodstock stage are located and a handful of veteran acts like Santana are playing for the 50th anniversary weekend.

The 45-year-old is among those in a generation too young to reminisce about that 1969’s weekend of peace, love and music, but who value the ideals that Woodstock came to symbolize enough to carry them on.

Wielding a walking staff etched with beaver teeth marks and wearing a long black cloak emblazoned with neon paint, he journeys each year to the forest behind the old Yasgur farmstead — also part of the sprawling original grounds that were lent to Woodstock organizers by a benevolent farmer in 1969.

Scores of people camp out annually there to honor what they consider to be the original festival’s spirit.

Children run wild as people of all ages dance, paint and relax in hammocks among the tall pine trees, and a number of local bands play for the crowd.

A muddy path flanked by greenery snakes among dozens of makeshift stands proffering crystals, pipes, tapestries and tie-dye T-shirts with slogans like “Make America Grateful Again” — a reference to the quintessential 1960s rockers The Grateful Dead mashed with US President Donald Trump’s slogan.

“This is a little different than all the other Woodstock things,” the 45-year-old told AFP as the sun crept through the clouds, casting glimmers of light on the colorful yarn he threaded among trees at his campsite to create an intricate web.

“This is more of a family reunion. It’s not the commercial stuff,” he said. “What they don’t get about Woodstock, was that it was meant to be this big commercial.”

But facing a crush of people and lack of barriers the original Woodstock became free, Vanderessen recalled, “so for most of us it’s a pilgrimage to come here. It’s not about, ‘Who is on the lineup.'”

Those gathered in the woods behind Yasgur’s farm are decidedly younger than the crowd convened at the Bethel center, where the beer comes from a sponsored tent rather than a new friend’s cooler.

Mick and Amanda Jenkins, Pennsylvania natives who are respectively 37 and 34, subscribe to the hippie lifestyle — what they call “ideas of non-showy simplicity” — they say their parents imparted on them.

For Amanda, it’s important to thread hippie principles of peace through the generations as part of preserving “a legacy and a story that needs to be told.”

“If somebody is not there to tell this story, then the story dies,” said the high school teacher, flower crown like a halo atop her wavy blonde locks and crystals including an amethyst, a healing stone, in hand.

Perched against a tree nearby Michael Mahana, a three-year-old with a blonde bob, plays in the mud with sticks, far from the tech-rich environments of his peers.

His mother, Californian Shronnie Jean Miller, 42, says she grew up living on the road as a “deadhead” — a groupie of the Grateful Dead who follows the band’s tours — and that camping out in the woods is “like my Ritz.”

A local who goes by the name “Teach” came over to give her son a child’s size poncho in case the rains sweep in.

“It’s all peace and love and a good vibe,” she said. “We’re all just at home in the woods.”

For New York state resident Vanderessen, who in addition to web building specializes in painting people’s clothes while they’re still wearing them, being a hippie is simply “being aware of social change, and being a part of the change rather than…complaining about what other people are doing.

As he’s done for three decades he’ll be back next year to this hippie enclave, not for nostalgia for what was but rather what he believes could be — a more relaxed, more inclusive society.

“It’s about respecting what was there but also showing how we’re evolving and changing,” the psychedelic trance music fan who sports long dark hair said. “That’s what Woodstock is about.”

“It shouldn’t be a concert, it should be a worldwide holiday.”