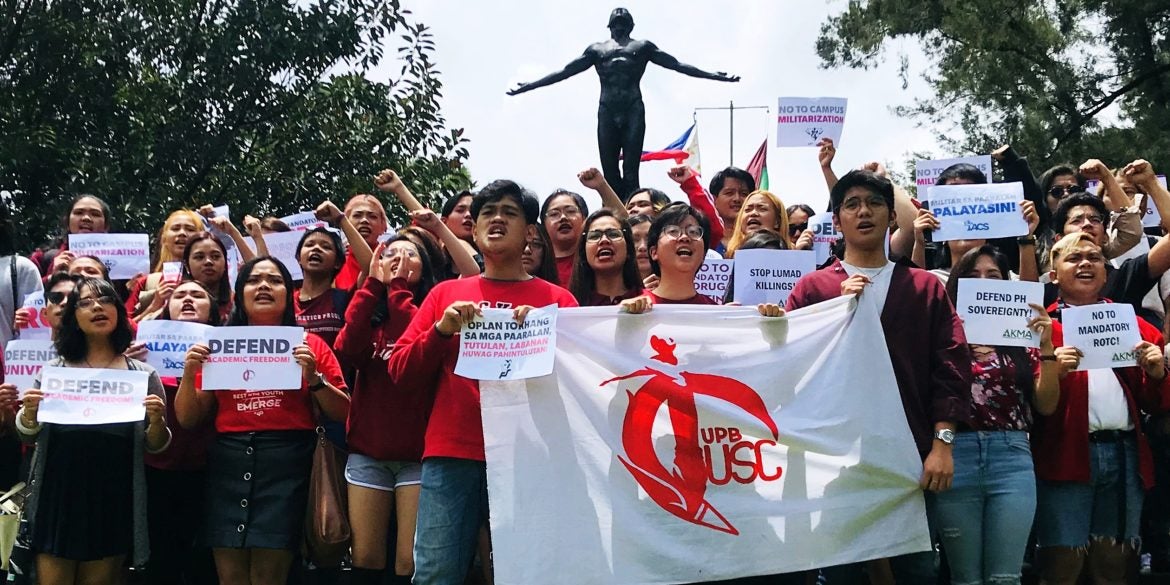 Close to a hundred students from the University of the Philippines (UP) Baguio assembled outside the campus gate as an act of defiance against the call to allow police and military inside colleges and universities. —Vincent Cabreza

Freshmen getting their first taste of public university life were greeted with infectious, rhythmic cheers on campuses across the country on Aug. 20, as students and faculty from across the University of the Philippines (UP) system stood united in a coordinated “Day of Walkout and Action.”

The event was organized in defense of academic freedom and in protest against the government’s plan to crack down on student activism.

The fact that the walkout fell on the eve of the 36th death anniversary of the martyred former Sen. Benigno “Ninoy” Aquino Jr.—fiercest critic of the late dictator Ferdinand Marcos—fit the narrative neatly.

UP Diliman protesters assembled at the steps of Palma Hall at 11:30 a.m. to voice out their dissent before marching to Mendiola to meet up with protesters from other UP campuses. The Diliman delegation alone was composed of more than a thousand students.

“In light of the news that state forces such as the Armed Forces of the Philippines and the Philippine National Police will possibly be allowed into the university’s premises, the Iskolar ng Bayan were quick to respond with organized action to prove to the Duterte administration that the youth will not waver and will wholeheartedly continue the arduous fight for what is just and right,” said UP Diliman University Student Council (USC) education and research committee head Stefanie Regaspi.

Sen. Ronald “Bato” dela Rosa’s call to establish military presence in public universities to curb potential “recruitment” and alleged “kidnapping” of scholars by subversive leftist groups, prompted members of the UP community to bring up the 1982 Soto-Enrile Accord. Signed between then student leader Sonia Soto and former Defense Minister Juan Ponce Enrile, the accord barred military forces from entering university premises.

“We went out of our classrooms and joined the mobilization not just for ourselves, but also for the professors and sectors of society that regard UP as a safe space for the oppressed and marginalized,” declared UP Diliman USC chair Sean Thakur.

Meanwhile, the government has continued to downplay allegations of militarization in public universities. Interior Undersecretary Jonathan Malaya branded these claims as “propaganda by communist rebels.”

After the “Day of Walkout,” PNP chief Police Gen. Oscar Albayalde dismissed the demonstrations as “just militant groups trying to agitate others,” and that student groups were “overreacting” on the issue of deployment of officers to campuses, which Albayalde says is “a good deterrent against [communist] recruitment.”

But a student who requested anonymity summed up the spirit of the “Day of Walkout”: “The University of the Philippines is, first and foremost, the university of the people. This is not where bravery and democracy go to die. In spirit with all those who came before us, we will always be proud to oppose.” —CONTRIBUTED