‘Dolorosa’: Where is the sense of unrest? The performers are the bright side | Lifestyle.INQ ❮ ❯ 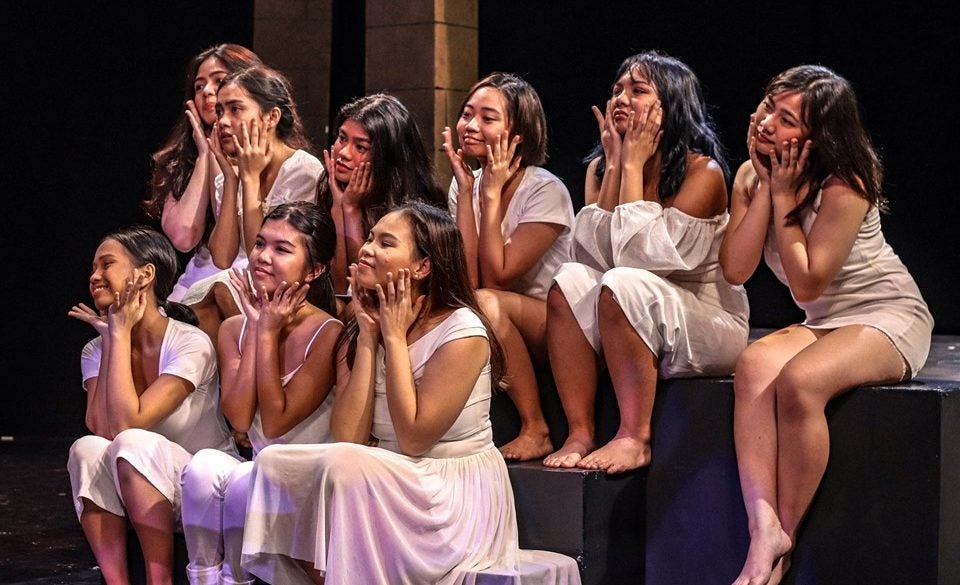 ‘Dolorosa’: Where is the sense of unrest? The performers are the bright side

Tanghalang Ateneo’s “Dolorosa” has ideas worth thinking about.

Directed by Jenny Jamora and written by Peter Zaragoza Mayshle (who has extended his original, one-act staged reading to a three-hour affair), the play is a multigenerational narrative about Filipino women under oppressive rule, and in the shadow of the image of the Virgin Mary as Mater Dolorosa. This intersection of religion, suffering and feminine identity is undoubtedly fertile ground for drama.

Unfortunately, “Dolorosa” never seems convinced of its own ideas. Its scattered assemblage of scenes is more confused than adventurous, more melodramatic than heartfelt.

It’s clear what the production aspires to be: a triptych of stories that, when taken as a whole, increases in significance. This would have worked if only the first two acts (set in the Philippines circa 1883 and 1943, respectively) didn’t turn out to be inessential backstories for the original script, which is now act three. By the time the finale rolls around, the connections made by these characters across space and time are incredibly tenuous.

The play wants to be both an anthology and an epic, but it spends far too much time attempting to convince us of its ambition.

Even with its scope (and its use of awkward metafictional devices), “Dolorosa” simply doesn’t have the tension or sense of unrest one would hope for in a story set in the Spanish era, the Japanese Occupation, and Gloria Macapagal-Arroyo’s presidency.

Against the production’s own insistence that momentous things are happening to its slew of protagonists, everything is executed with the stiffness of soap opera. It doesn’t help that most of the actors have been made to mouth their lines like they’re simply reciting them—as if performing aggressively toward us rather than performing the story.

On the bright side, a few of these performers break the play’s monotony. In the final act, Bowie Gutierrez plays a posh, resentful daughter with sincere sorrow. In the first act, Claudia Enriquez’s reluctantly rebellious performance makes for the most psychologically complete character in the entire production. Sabrina Basilio (in various supporting roles) is lively enough to resuscitate entire scenes, while Bibeth Orteza gets to add much-needed humor in small doses.

And while “Dolorosa” may be incapable of giving us a sense of its various eras, it still manages to produce several striking images. Lighting designer D Cortezano (assisted by Earvin Estioco) gets a lot of mileage out of the second act’s more surreal moments, while production designers Benjamin Padero and Carlo Tabije make the Mater Dolorosa herself just as gorgeous and haunting as the script suggests.

Unfortunately, the beauty of Our Lady of Sorrows can’t make up for what the play ends up as: a jumble of parts Frankenstein-ed together, unable to move as one body. The first two acts point at various conflicts encountered by women in the everyday, without providing any of the nuances so succinctly described by dramaturg Elise Ofilada in the program booklet.

The third act all but throws history away, focusing instead on a family’s personal squabbles, with one unintentionally amusing twist after another.

“Dolorosa” says many things about a woman’s agency—about the kinds of people women can be. And yet the production doesn’t do much with its characters but reduces them into a dysfunctional family. The play hints at greater stories and far deeper themes, but in its current form, it’s too comfortable to be bothered to really tell those stories. Ultimately, it becomes more interesting to think about the characters outside the theater—by imagining what they must have done and where they must have gone—than it is to actually watch their stories unfold. —CONTRIBUTED