Glamping with French flair in the wilds of North America | Lifestyle.INQ ❮ ❯ 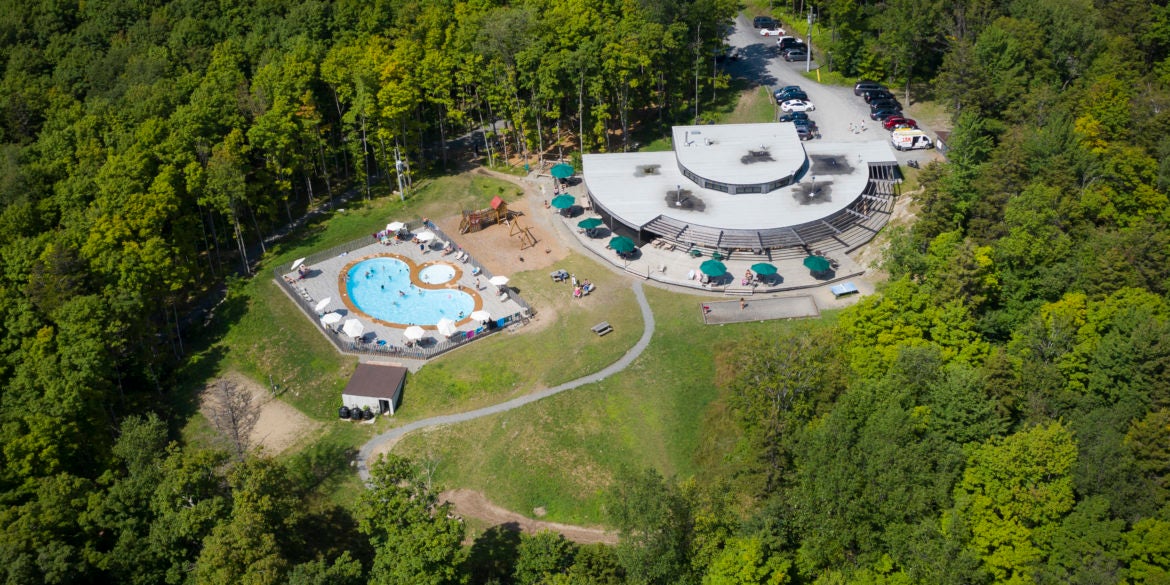 This aerial photo shows the lodge of the Huttopia Sutton glamping ground in Quebec, Canada, on August 14, 2019. - From a wicker trunk beneath a canvas tent, Céline Bossanne pulls out two wine glasses. "That's the French touch!" quips the co-founder of Huttopia Group, a French company that has tapped into growing demand for "glamping" to bring luxury accommodations to the Canadian and US wilds. Crockery, a mini-fridge, electric lighting, a feather mattress and silken sheets -- its tents have all of the amenities and creature comforts, under a starlit sky. There is "all that you need to camp comfortably," she said. (Photo by Sebastien St-Jean / AFP)

Glamping with French flair in the wilds of North America

Under one of the tents, Celine Bossanne pulls two wine glasses out of a wicker trunk — a bit of added luxury.

“That’s the French touch!” quips Bossanne, the co-founder of Huttopia Group, a French firm that has tapped into the “glamping” trend to bring high-end overnight stays to the Canadian and US wilds.

The deluxe package offered by Huttopia, which goes for Can$140 ($105) a day, even includes a private bathroom with a toilet.

The campsite, which is about a 90-minute drive from Montreal, has proven to be a hit with both Canadians and foreign tourists eager to take in nature but not wanting to deal with tent poles and sore backs.

“Glamping is discovering the true spirit of camping… which is to sleep in the wilderness,” says Bossanne.

“But we bring a little extra touch — comfort.”

The concept, which Huttopia helped to spread across France before expanding into North America, earns the company Can$81 million in annual revenues.

In Canada’s Quebec province alone, it sold more than 500 tents to provincial parks before launching and operating its own campsites in North America.

Each tent is made in northern France according to Huttopia’s specifications. All of its camping gear is also imported from France.

That Gallic flair can be felt throughout the campsite, from the slight Parisian accent of several expatriate staff to crepes on the menu and a celebration of France’s national holiday — Bastille Day — on July 14.

Bossanne and her husband Philippe started Huttopia in 1999 as a way to push back against the growing popularity of motorhomes encroaching on nature.

Two decades later, the company operates 51 campsites in France. In 2015, Huttopia expanded overseas, opening its first site near the town of Sutton in Quebec.

“We were sure the idea would work in Canada and the United States since these are ‘outdoor’ countries,” Bossanne told AFP.

With average growth of 15 percent annually, glamping has taken off in nature parks across Canada and the United States, which offer rentals of yurts, tents and teepees in idyllic natural settings.

By 2024, the US market alone for luxury camping accommodations is forecast to hit US$1 billion per year, according to market research firm Arizton.

In 2017, Americans spent a whopping US$167 billion on campsite stays, equipment such as tents and sleeping bags, and the purchase of RVs (recreational vehicles).

Huttopia expanded over the past year to the Netherlands and the US states of New Hampshire and Maine. It also acquired a large woodlot with a natural spring from Quakers in Los Angeles in California.

It is looking to soon open campsites in New York and Oregon, as well as China.

Sitting around a roaring campfire outside their tent in Quebec, the Howard family is bursting with excitement.

“Before the kids, we would put up a tent in the forest. Now it’s a bit easier with the tent ready for us,” says Ben Howard, experiencing the outdoors in style with his wife Stephanie and their two young children.

Nearby, Marc Dubreuil pulls a small cart along a forested path to his campsite, his two kids in tow.

“I hate camping — setting up is hard work. Here it’s all done for you. You just show up with food and bingo!” the Montreal marketing executive tells AFP.

Huttopia’s success has even attracted interest from an unlikely group: a Canadian indigenous tribe wanting to offer ecotourism on its lands in Quebec’s far north.

The Cree commissioned the company to design 50 tents inspired by its traditional longhouses and teepees for its use.

Just back from visiting a Cree settlement on the shores of Hudson Bay, 1,300 kilometers (800 miles) from Montreal, Bossanne rejoiced: “I never would have thought I’d be making tents for indigenous people!”