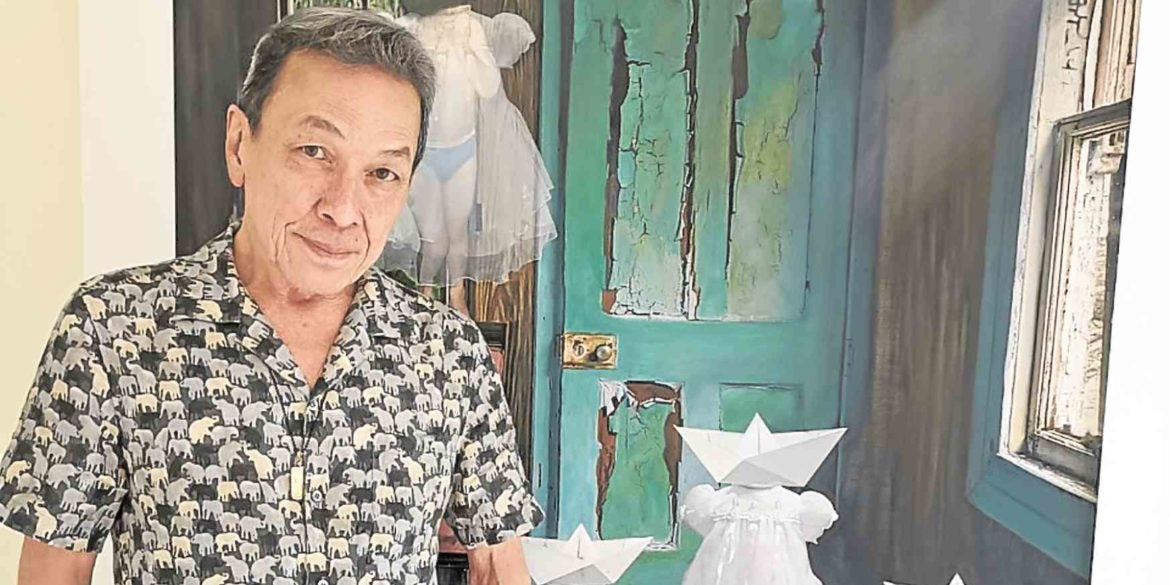 Eduardo Sicangco has been practicing his craft for over 40 years, even as he continues to teach in South Carolina.

Eduardo “Toto” Sicango’s return to the country was a homecoming for sentimental reasons. More than 40 years ago, he created his first set design for a Ballet Philippines (BP) production.

Four decades hence, he is back to transform an empty stage into an enchanted lake of tears where Odette will dance with her prince.

When BP artistic director and National Artist for Dance Alice Reyes enjoined him to do the scenery for “Swan Lake,” the gala show for BP’s 50th anniversary, he could not refuse. She was, after all, responsible for his initial assignment, together with another national artist, Salvador “Badong” Bernal.

“It was 1975 and I was 22 years old,” Toto recalls. “Badong Bernal invited me to work with him and Alice after I had graduated from university.” Bernal mentored him during his college days at the Ateneo, and fielded Toto to do a stage set shortly after. “It was an amazing experience, being entrusted with that responsibility at so young an age.”

Artistry was in Toto’s DNA. His mother and grandmother were opera singers. His mother Gloria Yulo Varela would take him along when she had a performance. “I was this little boy who sat quietly and watched as this housewife was transformed. Can you imagine the effect it had on a kid to see his mother become this opera singer?” Gloria encouraged his artistic bent, as she did with his sister, prima ballerina Cecile Sicango.

“It’s all my mother’s fault,” he says with affection. “When we were growing up in Negros, the girls were enrolled in ballet classes and the boys were given piano lessons. I was the middle child and was always drawing and doodling with crayons. My mother recognized my interest and engaged art teachers who taught me how to paint. From the age of seven to 11, I was learning from a woman who was classically trained, who made me copy the works of masters in oil and watercolor. My first painting was copied from Willoughby. I was 8 years old. My mother framed it and it still hangs in our home in Bacolod.”

His interest in theater sprung from an early exposure to the cinema. “My paternal grandmother would come to Negros on weekends,” he says. “There were three movie houses with double features. She would bring me along and watch all six movies. It was Hollywood and I wanted that life.”

Toto was enthralled by musicals like “My Fair Lady.” “I remember watching and thinking, someone did this,” referring to the remarkable visuals on screen. He became part of an amateur theater group which counted the likes of Peque Gallaga as members. This preoccupation extended until early college, when he came under the tutelage of Bernal. It was a trip abroad, however, that set him on course.

Traveling at the age of 16 was a rite of passage afforded by the patriarch, Jose Sicango, who would send his children abroad. When it was Toto’s turn, he flew to Europe and the United States. “I was attracted to London and was drawn to the theater. Then I hit Paris and thought it was very beautiful, but when I arrived in New York, I was struck by the diversity and just knew this was it. I loved the theater, the sets, the opera, the arts.”

When he got back to Manila, Toto became frustrated at the lack of support. He had seen the level of production in New York. “Beaders, embroiderers, scenic artists dedicated solely to painting the scenery, sculptors and different craftsmen were all part of the support system. And I believe it’s like that because it’s a business,” he says. Toto acknowledges that the country has considerable local talent. His difficulty is with the lack of discipline and attitude that settles for mediocrity.

He hankered for New York and explored possibilities. “It was the preinternet age,” he recounts. “I thought there should be a university teaching a course in stage design so I went to the Ateneo library to research and discovered New York University (NYU). I applied and was accepted on probation, since I still hadn’t done the interview. I had just sent my portfolio, and that was the basis for my entry.”

He went to NYU, finished his MFA and began a career that spanned over four decades. “I really just wanted New York to be my campus,” he continues. One of his teachers was the award-winning set designer Oliver Smith. “He was the legend who did the set designs of ‘Camelot,’ ‘West Side Story,’ ‘My Fair Lady’ and ‘Hello, Dolly,’ among many. When he died, NYU offered me the job to replace him as master teacher.”

Toto taught there for eight years, until he had a mid-life crisis. “It was tough but I managed to survive,” he says. He did some freelancing and is now back to teaching at the North Carolina School of the Arts, where he put in another eight years.

He still maintains his apartment in New York, a two-and-a-half-hour plane ride away. “You step out of the front door and New York hits you in the face.” It invigorates him. He has done hundreds of set designs for ballet, film, television, theme parks, circuses and ice shows. When asked which were his favorites, he replies: “My next one.”

Toto reflects for a moment before adding: “If I were trying to impress, I would say working in Radio City. It’s spectacular with the Rockettes, the art deco and the stage is phenomenal. My Broadway debut was ‘Gentlemen Prefer Blondes.’ We had a party at Sardi’s after. It was a Broadway essential.”

He becomes reflective again. “I’ve had a good career. What is it that they say, lucky the man who has his passion for his profession? The moment this becomes work, I’m going to retire.”

The weather and a respiratory infection aborted a planned trip to Divisoria to source fabrics and materials for the costumes and set. While he is engaged as a set designer, he volunteered to help with the costumes to ensure the overall quality of the production.

Initially, he was unenthusiastic when Alice Reyes invited him to work on “Swan Lake.” “Usually it’s just a painted backdrop with a moon, a lake and a castle, such a cliché. I didn’t know what to do but I knew I didn’t want it to be boring.

“I read up on the German version of the fairy tale and was struck by the lake. It’s actually enchanted, made from the tears of the mothers whose daughters were turned into swans. It gave me an entry and I started to fall in love with ‘Swan Lake’ again.”

He also took off from the 50th anniversary color of gold and had 5,000 sheets of gold leaf sourced to create the lake. Toto spreads his drawings all over the show curtain that will greet the audience, the enchanted lake that lights up, and an opulent gold palace where Prince Siegfried’s birthday party will be held.

But he doesn’t want too much attention. “I don’t like the focus on me,” he says. “That’s why I’m a backstage designer. I like to control the picture, but not be in the picture.” —CONTRIBUTED